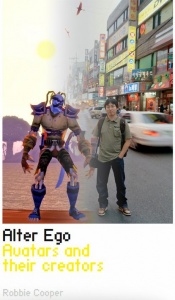 Alter Ego is a new book that juxtaposes real life gamers with their virtual avatars. Each page and facing page presents two photos of one gamer; on the left, a photo of the person as they appear ion real life, on the right, their avatar. The book is the passion project of British photojournalist Robbie Cooper and American game designer Tracy Spaight. For years, Cooper has traveled the world taking photographs and gathering the stories of a wide range of online gamers. The project has received a great deal of mainstream media attention through exhibits across Europe. The book, published last month, is the culmination of these efforts and a minimalist study of escapism, virtual worlds and identity.

“Virtual worlds offer us the opportunity to explore ideas and ideals, in an environment that’s relatively risk free,” Cooper explained during the book’s virtual launch in Second Life. Alter Ego strips away that safety net, revealing the person behind the avatar.

At the beginning of the project, Cooper insisted that he had no goal or message in the exploration of virtual identities. He simply wanted to “record something.” “A stereotype is oversimplified,” Cooper noted, “[I] just wanted to get some real human complexity.”

One example is the portrait of the gold famer. On one page, there is a man from China who judging from his photograph, does not go outside too often. He is a power-leveler and is photographed standing on a desk in a bleached room full of computers with dark circles under his eyes, smoking a cigarette. People might condemn these practices, but the engaging first person bio from Spaight shows that this is his life. He plays 70 hours a week and described himself as a “personal fitness trainer for your avatar”. It’s all in the framing.

On the previous page are two female Chinese students who were drawn to World of Warcraft by its artistry. They look nothing like the classic caricature of a gamer – they are women after all – but give the most classic reason for their online adventures: “Online, there’s a barrier between you and that other person.” Their story is a common one and again makes the reader question his preconceptions of what a game truly looks like.

Spaight actually went so far as to cast the book as the human face of demographics. Statistics show that half of online gamers are women, but that mathematical reality has never taken root in popular culture. On message boards, in the games themselves and even in the mainstream media, it just seems safe to assume that every gamer is a college aged male. It’s not accurate, but it is the perception. 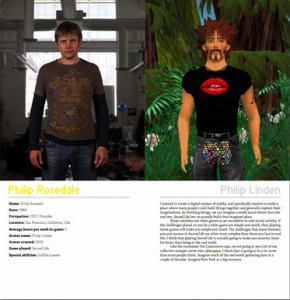 “I knew the demographics of virtual worlds,” Spaight told us, “but it still amazed me to see so many middle aged women and house wives and retirees.”

The attempts of the authors to counteract stereotypical views of who online gamers are at times swings the pendulum too far to the other side. The profiles in this book are in most cases of people with extraordinary stories that either move or surprise the read. The true profile of an online gamer is somewhere in the middle. While a book with balanced demographics may be more scholarly, Alter Ego‘s strength is in the variety and individuality of each page. Whether it’s the contrast between the person and their avatar or the unusual profession of the real individual, each biography gives a strong reason not to turn the page.

Alter Ego is not a book to be read from cover to cover. It’s a conversation piece and the ideal coffee table book. It’s not meant for reference and there are no page numbers. It’s meant to be enjoyed in the moment. Every page tells a story.

“The ambition was to present complexity, within a topic that was oversimplified and patronized,” Cooper told his assembled audience in Second Life. As the authors spoke, they consistently mentioned the negative media attention drawn to gaming and gamers. Their characterizations sounded, at times, like the now comical objections people once had to pen-and-paper games like Dungeons and Dragons, nevertheless persistent negativity and misunderstanding from the mainstream press is (and populace) is a fact of life for many gamers. Alter Ego will hopefully causes a few people to look at gamers, and by extension games, in a new light.