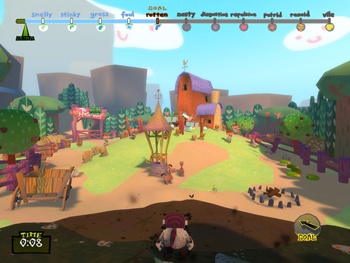 In the old oral tale called “The Story of Grandmother,” a young girl meets a werewolf in the woods and tells him she’s going to her grandmother’s house. The werewolf takes a shorter route, killing the grandmother and hiding in her bed after he arrives. When the girl shows up, the werewolf tricks her into eating her grandmother’s flesh and drinking her blood. Then, the werewolf asks her to undress and get into bed with him, which she does. Finally, she notices his hairy body and big mouth and convinces the werewolf to let her go outside to relieve herself. She runs away instead, grandmother-less and an accidental cannibal now, but safe at least.

Most of us know this story better as the version called “Little Red Riding Hood” where the werewolf is just a talking wolf, nobody eats their own grandmother and the sexual innuendo is gone. Once upon a time, fairy tales were terrifying, gruesome and violent, but modern adaptations have turned them into harmless, inoffensive children’s fare. Part of the blame goes to the earliest collectors of the original oral stories, Charles Perrault and the Grimm brothers, who altered the tales of peasants and village folk to suit their aristocratic audiences. These days, blame goes to film and book companies determined to extract every family-friendly cent out of the best known stories in the English-speaking world.

Here to restore fairy tales to their macabre states comes American McGee’s Grimm, a new episodic videogame series from Spicy Horse Games available weekly on the GameTap online subscription service. You play as Grimm, an ugly little dwarf who’s pissed off at (and eventually pisses on) all the pastel colors, cuddly creatures and G-rated plot changes that have invaded the fairy-tale world. Luckily for Grimm, he has the power to revive their original spirit. He’s such a stinky, foul beast that his aura of grossness physically alters the landscape around him.

Moving the odious dwarf through environments from each fairy tale turns whatever is bright and cheerful into something that’s dark, disgusting and oftentimes bleeding from the eyeballs. Essentially, Grimm changes his environment from a Disney movie into a Tim Burton one. Only certain objects can be grossified until you raise Grimm’s level of repulsiveness, letting him stain and spoil bigger things in a wider radius until transforming a goal object that ends the level. It’s sort of Katamari Damacy starring Pig-Pen from the Peanuts gang.

Light platforming spices up some levels, with Grimm peeing to show you how far he can jump. Some opposition comes from human and animal “cleaners” who tidy Grimm’s mess until he grows vile enough to turn them to the dark side, too. Each level also hides one or two secret tokens that unlock a gallery of each episode’s art assets when all are collected. None of these tasks presents much of a challenge, although the difficulty rises slightly in each episode. An average gamer should make it through each episode in less than an hour on their first try. Some speed-demons on GameTap’s leaderboards have finished episodes in less than five minutes!

Dirtying up the environments isn’t hard, but it’s a lot of fun to see what happens when you coat the environment with yuck. The ground turns brown and grey. Plants wither and die. Buildings rot. Sunny days cloud over into stormy nights. Worlds that were bright pink, blue and green become dens of black, purple and blood red. Every object and character has a sinister, often hilarious counterpart. 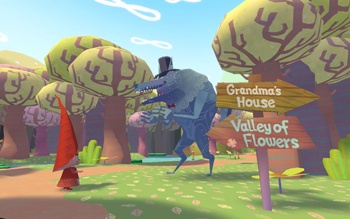 For those with the necessary black humor, the variety and creativity of these transformations is where Grimm really entertains. Happy cartoon deer and canaries mutate into wriggling, split-in-two carcasses and squished, dissected bird chunks. Flower fields change into graveyards with giant, skeletal hands reaching out of the ground. In the “Little Red Riding Hood” episode, raked leaves morph into piles of hacked-up wolf parts. Whales blow blood out of their blowholes. Milk barrels convert into rum. Gardens of cabbages become gardens of children’s heads. And most fun, Easter eggs turn into the facehugger pods from the Alien movies, spitting out zombie bunnies led by a giant, double-mouthed rabbit-monster.

To the credit of the art team led by Kenneth Wong, Grimm‘s environments are genuinely funny, sometimes to the degree of laughing out loud. Sadly, cutscenes and dialogue are sloppy and often annoying. Grimm himself is particularly grating, calling out in a gravelly “chain-smoking pirate” voice every few moments and disdainfully narrating each tale. Episodes begin and end with a marionette enactment of their fairy tales. A lame, happy version begins the episode and Grimm’s darker, gory version plays when all the levels are complete. The joke is supposed to be that the “acting” in the marionette plays is bad-all stiff and monotone-but it’s actually not bad enough. The joke is lost because you can’t tell whether it actually is just bad. Also, the less said about the game’s opening musical number the better.

Some technical issues irritate. Each new episode resets all of your control, sound and graphics settings. The camera is too close to Grimm, so a lot of the environment-changing happens out of your view. Converting goal objects either ends a level or lets you access a new place, but you can’t tell in advance which it will do.

Overall, however, Grimm‘s biggest failing is that it’s actually not scary and morbid enough. Its dark version of “Little Red Riding Hood,” for example, is nowhere near as horrible as “The Story of Grandmother.” Grimm just trades cheerful cartoon graphics for macabre cartoon graphics, but it still remains a cartoon. Its gruesomeness is played for laughs rather than genuine fear, so it doesn’t really restore the original fairy tales the way it claims to. We’ll have to wait for a different game for that (or just read Angela Carter’s amazing book The Bloody Chamber), but in the meantime, Grimm milks an entertaining and unique romp out of the fairy-tale cash cow.

Bottom Line: Super easy, but still fun. Too morbid for kids, but not horrifying enough for adults. Play it for the visual humor and the great art style.

Recommendation: A one-month subscription to GameTap costs 99 cents. Wait until September 18 when all eight episodes of the first “season” have been released and then play them all that month for less than a dollar.

Chris LaVigne is a freelance writer who does not know the taste of human flesh. Yet.

This review is based on Episodes 1-6 of the game.