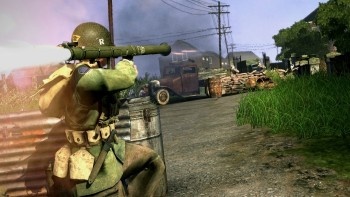 I love watching one of my best friends play Call of Duty. His method of combating Nazis is absolutely mind blowing. When he starts slinging hot lead at America’s greatest foes, previously known tactics become irrelevant. Actually, all tactics, strategy and plotting (as well as its mustachioed doppelgänger, scheming) cease to matter. Instead, he runs, guns and bunny-hops through the game as though it were Halo.

Nothing against Halo or Call of Duty, of course, but last time I checked, World War II was a team effort. If one fleet-footed, utterly fearless soldier were all it took to win the second War to End All Wars, things would’ve been a hell of a lot easier. But it wasn’t – and they weren’t. That’s where Brothers in Arms: Hell’s Highway comes in.

Aside from the oddly anachronistic – though useful – “Last time, on Brothers in Arms” cinematic that begins Hell’s Highway, the game strives to portray World War II accurately while omitting the bit about how war isn’t actually fun. It’s a precarious balance, but for the most part Gearbox pulls it off well. Weapons are appropriately lethal, bullet-riddled cover splinters convincingly and bounding over barriers into a blinding blizzard of gunfire is akin to wearing a “kick me” sign at a bully convention. Even so, an ironically Halo-esque regenerating health system, slow-mo kill cam and Rainbow Six-inspired cover system make sure frustration rarely trumps fun.

On the whole, Hell’s Highway‘s central feature, squad command, is intuitive and fluid, but occasionally it will almost* make you want to root against your A.I. comrades. Usually, the game puts your character’s thunderous vocal cords in control of two specialized squads – of either the fire, assault, bazooka or machine gun varieties depending on the situation – and tasks you with positioning them out of harm’s way or in key support positions. When fate (or level design) flashes a grin your way, the system is undeniably satisfying – allowing you to trap your foes in the center of a bullet-spewing, Nazi-shredding human blender. Nearly as often as not, however, your squads will clomp down the path of greatest resistance, popping right over obvious cover and directly into Hell’s Highway‘s particular brand of traffic – bullets.

Some people adore this tactical aspect of the series, and I can understand why. Given the A.I.’s blind obedience and the game’s multi-pathed levels, there’s a fair deal of room for experimentation. However, checkpoints, the game’s only method of saving, tend to get in the way here, forcing you to replay unimportant bits of a scenario when you just want to jump right into the fray.

As with your teammates, enemies in Hell’s Highway are, for the most part, competent. They dive behind cover, bolt to safer cover when they’ve been flanked and … well, they really know their way around cover. But therein lies the problem: Enemies will get cozy behind walls, fences and what have you until they’re either a) dead or b) about to be dead. Thus, a number of firefights quickly devolve into either peek-a-boo with guns or your own one-man flanking show, since your squads aren’t so hot at the whole “moving without being shot” thing. Additionally, when you find yourself in such skirmishes, the against-all-odds sense of urgency that usually accompanies battle quickly dissipates. If the Nazis won’t advance their position, you can just hang back and take your time.

*The whole Hitler thing is kind of a deal-breaker. 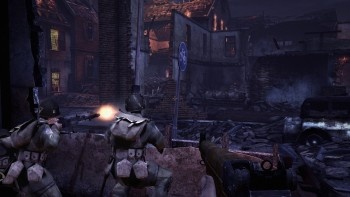 But where Hell’s Highway‘s gameplay takes a tumble, its story is there to pick up the slack. Again, unlike many of its genre compatriots, Hell’s Highway‘s war-torn tale isn’t simply an overview of World War II; instead, it takes a grimy, almost painful look at a division of soldiers who fought the good fight. Clichéd though it may be, war is hell, and Hell’s Highway beats you – and its characters – over the head with that fact.

Eschewing modern shooter conventions, Hell’s Highway conveys its story through traditional cut scenes. Heartrending flashbacks get almost as much screen time as your character’s various death-dealing ordinances. Combined with an excellent script, these mad-cap interludes will have you empathizing with the game’s cast, regardless of whether or not you’ve played the other two games in the series.

At least, you’ll be crying your crocodile tears for characters in the cut-scenes. Once Gearbox snaps the puppet strings from its characters and puts them back under your control, things get a little dicey. On one side, you have a fleshed-out squad that’s seen some things, man. On the other, you have a bumbling team of bottom-shelf robots, endowed with the intelligence of a creepy Chuck E. Cheese automaton and only a smidge more humanity. Their three or so incessantly repeated catch-phrases only serve to drive that point home.

On top of that, for a game that’s essentially a sermon about the horrors of war, your “dead” squadmates’ magical ability to spring back to life post-battle is jarring. Sure, it keeps the game “fair,” but it kills any sense of loss during gameplay. By the same token, the slow-mo kill cam, probably meant to highlight the limb-rending pain of battle, only serves to glorify death with a blood-splattered plethora of “Whoa! Awesome!” moments.

Hell’s Highway has a multiplayer mode, but you probably won’t care. It’s a typical objective-based setup, but you’re not in control of an A.I. squad, so why even bother? It’s Brothers in Arms without the brothers. Yes, there’s a “squad,” but it’s composed of other people who, in the time I spent online, played Hell’s Highway like it was Halo – cover and tactics be damned.

Ultimately, though, Hell’s Highway is a good game teetering on the cusp of greatness, with only a few incongruous design decisions holding it back. The story, though more or less a movie that occasionally interrupts a vaguely related game, is well implemented, and the tactical gameplay is enjoyable when the A.I. isn’t raining on your parade. If nothing else, Hell’s Highway is a change of pace from what all the other guys are doing. If World War II shooters are your thing, you’ll probably have a good, but not great time with Brothers in Arms: Hell’s Highway.

Bottom line: With an engrossing character-driven storyline and brain-bending gameplay, Hell’s Highway is a wild ride, but inconsistent A.I. and a few perplexing design choices keep the good times from achieving maximum rollage.

Recommendation: Rent it if you’ve never played a Brothers in Arms title, but can list off The History Channel’s weekday lineup in under a minute. Buy it if you enjoyed the other two games in the series.