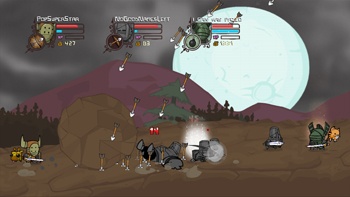 Castle Crashers is one of those games that is so fun you feel like your review has to be extra insightful and entertaining because otherwise people will quit reading and just go play. So you get all intimidated about what to write because it has to be so witty and so smart that in the end you’re reduced to opening like this just to cover a base or two. Yeah, maybe you should go start downloading it from Xbox Live Arcade and I’ll be carrying on in a more useful fashion when you get back.

At $15, Castle Crashers is worth every penny, and it’ll be worth it for all your friends, too, when they come over to crash castles with you. Co-op (with up to four players online or off) as accessible and compelling as this is like an infinite happy tree; I’ve played the first several levels over ten times and am still playing. The beat’em up genre is generally hardcore in that vanishing-quarters-act sort of way, but here, RPG elements give lots of incentive to keep trying – as if a duel to the death with your comrades over who gets to make out with the princesses isn’t enough!

Oh yeah, there’s a story with a magical crystal and some princesses. If only there were a way to skip the cut-scenes. Short as they are, you really don’t need to see them every time.

Starting out, you’ll get the choice between four level-one knights: poison, fire, ice, and lightning. Soon after, you’ll unlock a grey knight whose magic attack is simply a shower of arrows, and there are additional exciting and worthwhile characters to unlock after you beat the game.
Being a beat’em up, Castle Crashers is the definition of button-mashy; however, since you have light and heavy melee attacks with unlocking combos, archery, and magic to use, there can be a fair amount of depth to your fighting style depending how you allocate your stat points. How I wish there were some area of effect attacks to mitigate the longitudinal razor edge of beat’em up hit boxes, but for all the times you whiff, there will soon follow a combo that sees you smacking your enemy all the way across the screen.

The stages are each a node on a path throughout a kingdom that includes a surprising range of environmental features. Yes, there’s a lava world. Yes, there’s an ice world. The water level (where to fight effectively you need to be standing on a bit of floating debris or a swimming animal, and every enemy’s intention is to knock you down) will make you cry, as water levels seem to have a reputation for doing (maybe they designed it that way on purpose), but it’s still fun. You’ll meet a variety of startlingly (and quite frankly, unnecessarily) incontinent forest animals, an army of Alien Hominid clones (The Behemoth takes every opportunity to remind you it did the masochistically hardcore side-scrolling shooter, Alien Hominid), and – ok I won’t spoil that one; it’s too lol-able, if a bit predictable. 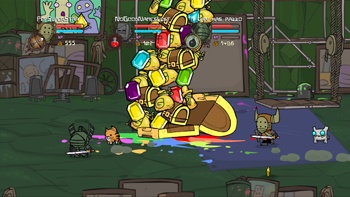 After some hack ‘n slashing (and maybe some dinosaur/noble steed-mounted homicide), you’ll arrive at a boss. Some of these are more cleverly designed than others, requiring someone with a thinking cap on if you want to dismantle them quickly, but the ends of the fights often become rather cheap. The “You can hit me now–oh wait, no you can’t! I’m so fast!” mechanic might be slightly over-used, especially by the time you reach the freaking Corn boss, but if you have multiple players, it’s not usually too much trouble to get in a couple hits per opening. The final encounter takes the appropriately infuriating amount of forms, but is certainly not impossible, and in fact, I think my roommate and I somehow managed to win on our first attempt, even if I did have to play the CPR mini-game to resurrect him.

Besides experience points, you’ll pick up your fair share of loot in the form of money, weaponry, and animal orbs. Money is good for buying more weaponry and animal orbs, but also expendable items like potions (which, in a casual stroke of genius, are applied automatically so you never have one of those forehead slap moments of forgetting to just hit the button). Each animal orb has a specific effect, so it’s important to check in at the ark to learn, for instance, that Cardinal helps you find secrets, and Giraffey boosts your experience. My one issue with the orbs is that the ones that do damage don’t seem to level up or even scale to your level, so even though the bloodsucking bat is cool, I’d rather have extra XP than one hit taken off an enemy every so often.

This is probably a good time to talk about how all of this content is managed over your character profiles, and over the characters of people you play with, because the system can be frustrating in its fairness. All your money is shared for your whole account, which can be handy if a noob character needs potions. Unfortunately, many of the weapons have level caps, so you can’t excessively pimp your guys. When playing with friends, even though they have to come with you as a group to the blacksmith and ark, they can’t have any animals or weapons they haven’t already unlocked themselves. Sometimes I just want to share! I can understand not wanting players to power level by just tagging along while other characters do all the work, though, so not having an even split on the XP makes sense.

Rather than complain about the couple of crashes, the freeze, the infinite death sequence that resulted when a mob of enemies were juggling my corpse so adeptly that it never hit the ground, I will just mention that The Behemoth is already working on a patch to please the 170,000 (+, I’m sure, by now) people playing Castle Crashers.

The Bottom Line: Your download should be done by now!

Emily Balistrieri is the type of freelance writer who forces her friends to test multiplayer modes, but this time they weren’t upset.