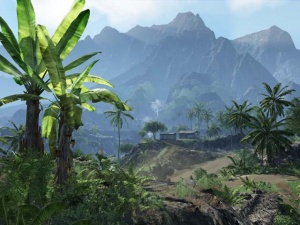 Three and a half years ago, Crytek didn’t have a reputation to worry about. No one could’ve guessed that the unknown German studio’s debut game, FarCry, would reset the standard for graphics and convince droves of PC gamers to pony up for the latest generation of video hardware. FarCry‘s visual wizardry surprised just about everyone.

In contrast, Crytek’s sophomore effort, Crysis, finds itself on the opposite end of gamers’ expectations. Eighteen months of stunning previews and tech demos left almost no question as to whether Crytek could once again raise the graphical bar. PC enthusiasts stockpiled funds in anticipation of Crysis‘ unforgiving hardware requirements, and those unable to deny DirectX 10’s siren song actually installed (gasp!) Windows Vista.

It will come as no surprise to anyone, then, to hear that Crytek’s latest creation is often wondrously beautiful. As long as it has access to high-end hardware, Crysis will churn out scenes of unparalleled realism. The ivory-sanded beaches and mountainous jungles that host the majority of the game’s story actually make FarCry‘s tropical renderings look downright rudimentary. 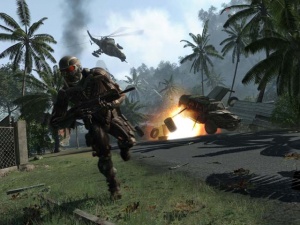 This isn’t to say that a wallet-busting hardware investment is a Crysis prerequisite. Crytek assembled and animated Crysis‘ world with craft and care, and its environments still manage to look quite good absent layers of sophisticated shaders and effects. It sounds amazing, and its object physics are incredible. Even at low settings Crysis is no slouch.

Visual tech may be its claim to fame, but Crytek can also build some truly exceptional single-player FPS levels. Although wide swaths of ocean and mountainous geography gently channel the player from one goal to the next, Crysis usually provides great big spaces to explore and multiple paths toward objectives. There’s a breathtaking sense of freedom and opportunity to nearly every combat encounter.

The majority of Crysis‘ single-player campaign takes place in the same nonlinear, vehicle-strewn jungle environments that made FarCry‘s opening hours so enjoyable. Crytek adds a new feature to the formula, however: a set of nanosuit-enabled powers that allow the player to temporarily boost armor, strength or speed, and even move while invisible for short distances. 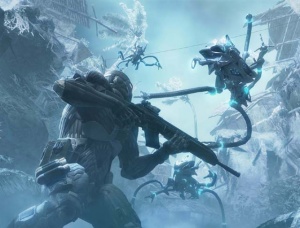 You can play Crysis as a typical duck, run and shoot FPS, but judicious nanosuit use is far more effective. Crysis‘ human enemies are formidable opponents. They take cover, sneak around, flank, charge, call for reinforcements and effectively use grenades. Stealthy ambushes can quickly devolve into furious and deadly gun battles.

I haven’t yet mentioned Crysis‘ story, for a couple of reasons. I don’t want to be accused of spoiling, for one thing. Suffice it to say that Crysis‘ near-future plot begins on a tropical island and involves a lot of military combat. I’ll also reveal what glancing at the game’s box or a few official screenshots will confirm: flying alien-like creatures eventually appear, and at some point in the game things get very, very cold.

Really, though, there isn’t a whole lot to spoil. Crysis‘ story is unremarkable. Sure, there are some astounding sights and even a few revelatory moments, but the plot is primarily a backdrop for visual spectacle. Don’t expect the smart bits of exposition that you’ll find sprinkled throughout better games. The dialogue is mediocre, the characters are absurd and the plot eventually unravels to a disappointing conclusion that clumsily lays the groundwork for a sequel. 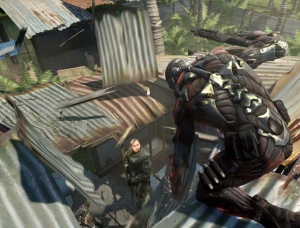 Crysis‘ story only lasts about 10 hours, and it takes some unfortunate turns as it approaches its conclusion. Sadly, its best feature, the blissfully open-ended play, vanishes almost completely, to be replaced by a steady stream of blockbuster set piece battles and rail shooting, turret-gunning and vehicle sequences. These encounters look nice, but they aren’t nearly as fun or rewarding.

Crysis will easily earn the adoration of gamers who place visuals in especially high regard, and who can stomach the price tags for the high-end tech the game’s full glory requires. Jaw-dropping graphics aside, it’s still a good game. Despite some late-game disappointments and pacing problems, Crysis provides enough substantive, intelligent gameplay to please just about anyone who appreciates a good first-person PC shooter.