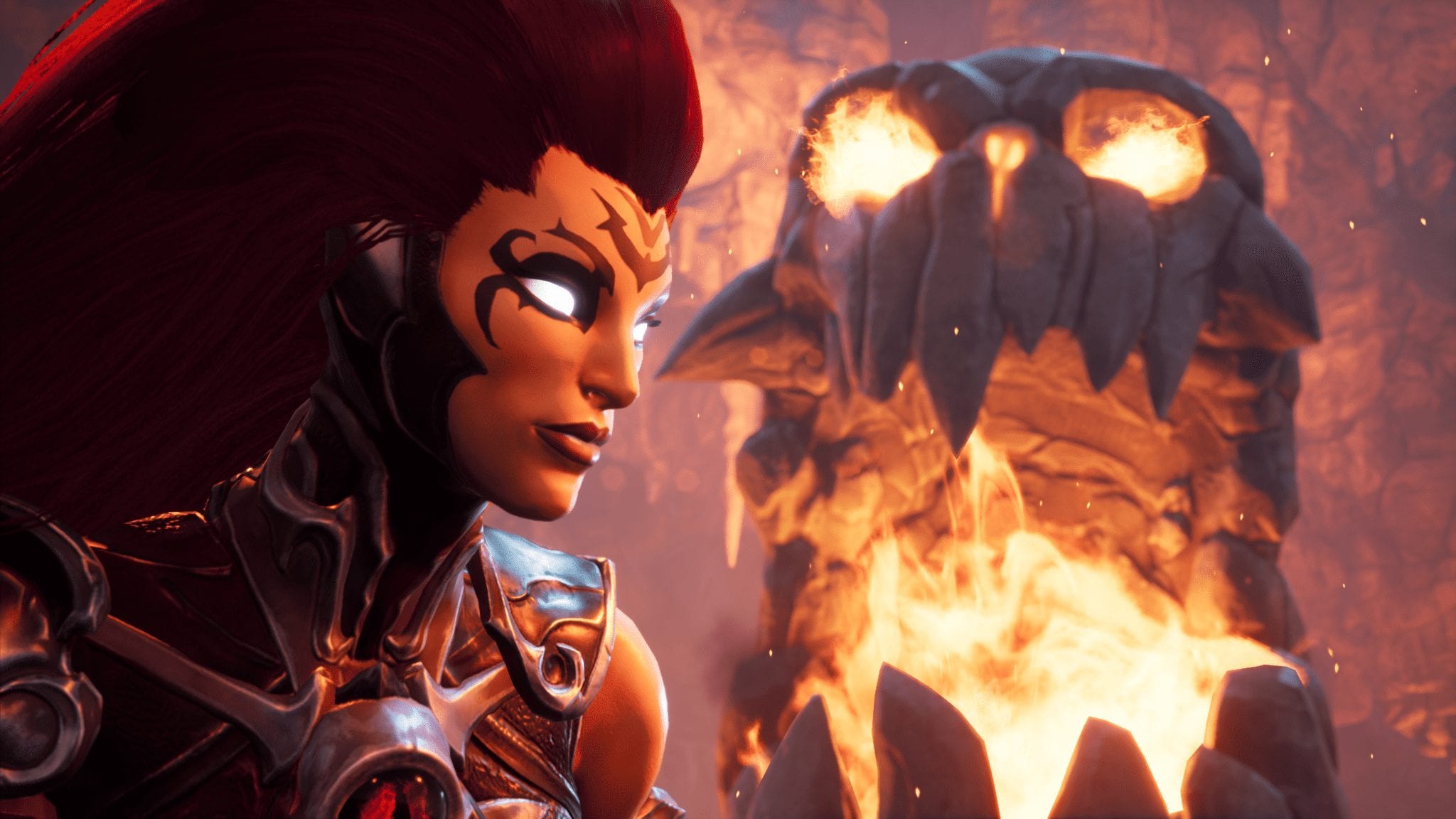 “You’re talking about art? Now? Here?” Fury — horseman of the apocalypse, whip enthusiast, and ornery lead of Darksiders III — asks, incredulous that her companion the Watcher is admiring mankind’s ruined creative output after the end of the world. They’re on a mission to recapture the Seven Deadly Sins, physical manifestations of Old Testament Yahweh’s big universal No-Nos. And just as the Watcher is about to respond, a hoarder that looks like a Juggalo cosplaying as the trash lady from Labyrinth throws a bathtub at Fury’s face.

This scene tells you absolutely everything you need to know about Darksiders III. Its world, its point of view, its flair for the dramatic is all perfectly boiled down in Fury’s moment of reflection right before she has to lash a monster repeatedly with a whip made of fire. This one is Avarice, who lives in a post-apocalyptic museum where she’s surrounded by heaps of gold and statues and traffic lights and all the flotsam left by a human race barely hanging on during the Miltonian equivalent of World War II. The whole thing is simultaneously absurd and self-serious, gaudy but aesthetically consistent, a little frustrating but also a hell of a lot of fun. It is equally dumb and awesome. Gunfire Games’ sequel is, to put it lightly, metal as fuck.

Like all great vintage heavy metal in the tradition of Slayer, Darksiders III is fueled by full fat theatrics, outsized Catholic iconography, and ridiculous pyrotechnics that make it very hard to take seriously. Fortunately for all the badass posturing, the game recognizes its inherent silliness. When you’ve finished off Avarice and imprisoned him in a giant, glowing green skull,  Fury says, “Who needs a museum when you carry a collection like this?” The Watcher responds: “Ugh. Philistine.” The moment works because most of the 20 or so hours of the game, which moves across lava-covered catacombs and demon spider-infested subway systems plays it straight just like truly classic metal. Darksiders III aims to be David Lee Roth Souls, and save for some irksome performance issues, it hits that target.

While not developed by the same studio as the first two games — Gunfire is comprised of staff from Darksiders creator Vigil Games — Darksiders III does carry on its predecessors’ model for ambitious, imperfect, but ultimately effective imitation of other action role-playing greats. Darksiders borrowed the big map plus dungeons and puzzle-solving weapons of Zelda and Darksiders 2 leaned into the endless weapon and armor gathering of Diablo. Darksiders III lifts Dark Souls’ structure wholesale and applies it to the series’ unique brew of Escape From New York-style urban scenery, swords and sorcery high fantasy, and the comic book machismo-infused vision of the Rapture that went out of style with ‘90s movies like End of Days.

Darksiders III aims to be David Lee Roth Souls, and save for some irksome performance issues, it hits that target.

Fury explores a deftly interconnected world full of secret paths, tangling with all kinds of slimy beasts between her big boss fights with the Sins.  Like with Dark Souls, Darksiders III’s combat heavily emphasizes careful timing, dodges, and swift punishment. The sourcing is as bald here as when the first game included a freaking hookshot: your primary currency is literally souls, gathered to upgrade base stats or purchase items, and you can lose them upon death, which also causes all the enemies you’ve killed between deaths to respawn. As with the original game, the imitation is admirable in its creative execution, and typically more forgiving than the source material. I never once found myself as staunched by the combat in Darksiders III as I have in any of the games it echoes. Swinging around Fury’s whip or the four elementally-aligned weapons you earn throughout the game feels delightfully imprecise and freewheeling.

At the same time, Darksiders III continues the tradition of not being able to execute  at the same level as its inspirations. There’s no map to review when you’re neck deep in the game, and it’s easy to forget how or even that you need to get back to some places once you’ve earned new abilities like wall-jumping or a bonafide spider-ball right out of Metroid. A series of save points that double as a shop and fast travel system is more easily available than Souls’ bonfires (yet another feature helping make Darksiders III more forgiving and inviting), but even those markers are awkwardly arranged by name in a menu rather than laid out graphically. The lack of a map is exacerbated by hidden paths essential to discovering the next boss that are sometimes too cleverly concealed. Add in load times when the game has trouble keeping up with the action (sometimes it just stops for a few seconds), and it can sometimes feel like a hassle to get to Darksiders III’s creamy center.

So Darksiders is no Slayer or Dark Souls, all technical chops and pristine execution. Fortunately what it lacks in polish, it more than makes up for with heart and a compulsively playable world. Fury is as brutal and ridiculous as her brothers War and Death were in the previous games, but she also has a genuine arc, simple as it might be. At the beginning of the game, she’s a single-minded violence machine barking at everything that moves. By the end she’s changed, questioning her role in an amorphous conflict on a cruel universal stage. Scenes like Lust and Gluttony tempting Fury with power and pleasure, respectively, might lack subtlety, but they land on an archetypal level.

That’s no small feat considering the game looks like it was inspired by doodles in a teenage Lamb of God fan’s notebook, and that bit of extra depth makes slowly unraveling Darksiders III’s puzzle box world feel all the more rewarding. Being Fury is just fun, technical hiccups be damned.  Every new weapon you unlock comes with a whole new kind of jump to add to your starting double jump. High jumps, hover jumps, that spider-ball and other upgrades are doled out precisely when you want to do something new, and there are mercifully few new moves you have to get used to. Each upgrade is both a new weapon and a new navigation tool.

Darksiders III’s sense of economy and character is simple but nuanced, and it makes it easy to forgive other shortcomings. Nothing in this game is as luxurious as contemporaries like God of War or a modern Assassin’s Creed, but it also doesn’t have to be. Whenever I walked into a new place like the neon-tinged underwater Depths or finally reached the next boss and started swinging, the implied guitar riffs of the moment rang loud in my head. Gunfire Games should be proud of making a game where literally fighting Pride feels as silly and awesome as the painted cover of a vintage Ozzy Osbourne LP. Toss the horns and bring on the next horseman’s ride.