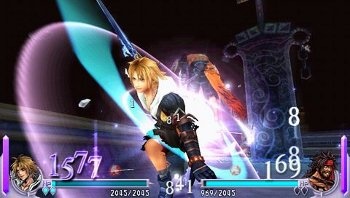 Nostalgia’s a powerful thing. For little more than a fond memory or two, people have been known to dress up in none-too-flattering costumes and rally at conventions, drop hours per day chatting with like-minded fans, and – of course – spend unnecessary sums of money on items related to the object of their nostalgic affections.

Final Fantasy’s sheepishly devoted flock of followers, especially, has gained a reputation for loving its series of choice with near-religious zeal. Hell, even at a Star Trek convention you’ll still find someone lugging around Cloud’s colossal cleaver. So, of course, Dissidia: Final Fantasy’s just a quick-and-dirty ploy to make a quick buck, right?

Actually, despite Dissidia’s tendency to roll up in a van and entice my inner child with all manner of nostalgic candies, its over-the-top, Dragonball Z-esque combat is what really kept me hooked. And that’s a bit odd, considering that I’m not really a fan of traditional fighting games. But then, Dissidia is no traditional fighter.

Instead, it works like this: Two ostentatiously garbed combatants face off on a completely 3D plane. Lock onto your opponent in order to keep track of him or her as they move around the colossal environment you’re brawling in. Once locked on, you’re simply a hop, skip, and a dash away from closing the distance between you and your opponent. Coupled with high-flying, blindingly flashy attacks, this movement system makes fights look, well, awesome.

Dissidia’s fighters dart and dash about, charging into each other like jousters fired out of cannons and crashing through destructible environments. Remember the fight scenes in Fantasy VII: Advent Children? Well, in Dissidia, you can play them.

This doesn’t make the game just another mindless button-masher. It wouldn’t be a Final Fantasy game without stats and other JRPG tropes, and boy are there plenty of them. In fact, the game’s a bit daunting at first, because, while it streamlines much of the JRPG formula, Dissidia somehow manages to contain more head-scratching numbers and acronyms than most traditional JRPGs.

The most crucial of these stats – at least, in combat – are hit points and bravery points. Hit points should be familiar enough to anyone who knows that “RPG” doesn’t just stand for “rocket-propelled grenade,” but bravery points are a stickier subject to master. In a nutshell, they dictate how much damage you can deal to an enemy’s HP, but they can also be gained and lost through their own special attack. Generally, your best bet is to open a match by chipping away at your opponent’s bravery before moving in for the kill.

Dissidia’s controls are simple enough, with nary a 42-button combo in sight. Instead, HP attacks are mapped to the square button, and bravery attacks on the circle button. By pushing the analog nub in a specific direction and tapping one of the two attack buttons, you can sling all manner of classic Final Fantasy attacks and spells. As battles wage on, you’ll also build up your EX meter, which when full, fuels your screen-devouring, usually fight-ending super attack. Omnislash, Blitz Ace Overdrive, Meteor, and many more round out this category, done up with so much bombast that you’ll probably miss the button presses used to wring out their full power because you’ll be too busy staring slack-jawed at their beautiful effects and animations. 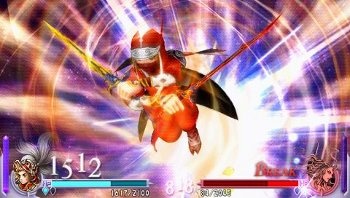 When you’re not busy beating the tar out of opponents, you’re able to swing by your local WMD-Mart and outfit your character with all kinds of weapons, armor and accessories. If you’re too broke to go shopping, the tiled world map is littered with enemies, chests, and occasional special items like summons. Each character’s story spans multiple boards, throughout which characters will level up, learn new skills, and – of course – get all mopey and introspective about what they’re fighting for.

And that leads us straight to the only real beef I have with Dissidia. The first half of the game, the part where most games are trying to impress you, sets the story afloat with neither wind for its sails nor a skip for its step. Calling its pace “glacial” is a bit generous, especially if you’ve played other numbered games in the Final Fantasy series. The root of the problem is twofold. For one, most characters split off from the rest of the group, limiting a fair deal of plot advancement to “Gee, I sure wish I knew what I was fighting for” introspection. And two, characters’ ultimate aims generally fall on confronting the villain from their respective games of origin (Cloud vs. Sephiroth, Tidus vs. Jecht, etc), essentially turning their plotlines into watered down versions of plots from previous games, with stiff, in-game body doubles playing the parts which lavish CG scenes pioneered in the original games.

Honestly, though, in the face of how much Square Enix got things so very right with Dissidia, my story-based quibbles are relatively minor. With utterly engrossing combat, varied characters that suit all manner of play styles, and tons of tunes and nods to Final Fantasy’s history, Dissidia: Final Fantasy is not only an excellent tribute to the Final Fantasy series, but a top-notch game in general. If you own a PSP and have even a passing interest in Final Fantasy, Dissidia’s a no-brainer.

Bottom Line: Dissidia: Final Fantasy is an extremely pleasant surprise. The combat’s fast, fluid, and – most of all – fun, even for gamers who normally avoid fighting games like the plague. Sure, the story could be better, but as a whole, Dissidia’s a spell-slinging, pretty-boy bashing good time.

Recommendation: Buy it. Between overall length and variation in characters’ fighting styles, Dissidia will keep you hacking, slashing, and introspecting long past the 20-hour mark.

Nathan Grayson will never get tired of giving Kefka his just deserts. Ever.