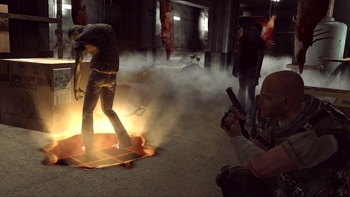 You might recall the action-packed, explosive-heavy exploits of the hyper-masculine, videogame action hero Matt Hazard. No? He’s the franchise mega star of classic games of the 80s and 90s, like The Adventures of Matt in Hazard Land, A Fistful of Hazard, Conflict of the Deities (Featuring Matt Hazard), You Only Live 1,317 Times and Matt and Dexter. How about his atrocious spinoffs like Haz-Matt Carts and Choking Hazard: Candy Gram? If you’ve never heard of them, it’s because they don’t really exist. But playing Eat Lead: The Return of Matt Hazard – an actual videogame cleverly developed by Vicious Cycle – makes me wish they did.

Don’t let the fact it was almost universally panned by game critics fool you. Eat Lead is actually an amazing game, much like the way Evil Dead 2 is an amazing horror movie…if you catch my drift. By spoofing the game industry itself, playfully poking fun at gaming clichés and doing away with all pretense of seriousness – while still trying to be a legitimate game at the same time – it offers just the right amount of tongue-in-cheek humor to make blasting away at inane baddies through eight levels packed with absurdity surprisingly worth the time.

Armed with plenty of horrible one-liners and a diverse cornucopia of death-dealing implements, Eat Lead‘s meathead protagonist is about as stereotypical as it gets for an action shooter, but his plight is downright bizarre. On the verge of being washed-up after a lengthy career as a videogame action star (yes, it’s a game about a character that stars in videogames), Hazard expects to make his big comeback in Eat Lead. The problem, it seems, is someone intends to use the new game to kill him off for good by hacking the code and dropping in scores of old adversaries culled from the publisher’s extensive back catalog of Matt Hazard titles. With the help of QA, his digitized female companion, Hazard is stuck shooting his way through increasingly warped levels that mash-up the most embarrassing moments of his gaming career.

Though oddly satisfying, the core gameplay in Eat Lead is largely unspectacular. It’s basically a standard third-person shooter that has you gunning your way through areas full of foes. You’ll progress from one intense firefight to the next, picking up a decent medley of weapons (some of which are quite silly) along the way. Since foes are virtual beings, they de-rez when killed, leaving behind a glowing orb that you’ll absorb to power your lone special ability: charging your bullets with fire or ice to help slay enemies with greater speed. Aside from some creative and outrageous boss encounters, the shooter action varies very little from the first level to the last. The one commendably-implemented gameplay element is the tight cover mechanic that lets you duck behind objects, run from one alcove to the next and utilize random obstacles with great finesse. It’s nothing particularly new or amazing, but it’s solid.

Until now, I’ve never played a game that throws sci-fi space warriors, kitchen staff, cowboys, machinegun-wielding fembots, seafaring tentacle monsters, construction workers, alien ships, zombies, 2D German soldiers (think the original Wolfenstein) and even guys carrying super-soakers at me in a single sitting. The asinine nature of the bad guys in Eat Lead really makes the experience more entertaining, since you never really know what enemies you’ll encounter and in what combination they’ll appear. That said, the enemy A.I. is extremely predictable and a little daft at times. At one point, I ducked around a wall I was hiding behind to find my foe on the other side ignoring me completely in favor of intently blasting hot lead into the wall I was just using for cover. A few seconds later (while I was still standing there watching) he actually threw a grenade at that very same wall – at point-blank range, no less – and blew himself up. The level of stupidity I witnessed was almost comically poetic. That’s not to say the game isn’t challenging; it is.

By all means, the highly repetitive task of shooting everything that moves and the formulaic level progression should have gotten painfully old early on in the game, yet the desire to press onward to see what new layer of strangeness would be uncovered grew stronger the more I played. Anyone who considers themselves a lover of videogames will appreciate the tremendous volume and broad range of gaming references worked into nearly all areas of Eat Lead. There are subtle nods to specific games, like Super Mario Bros., Halo and Wolfenstein alongside more general gaming references, including gags centered around tutorials, obligatory sniper levels, obnoxious quick-time events, and loading times disguised as elevator rides. The fact Hazard frequently breaks the fourth wall to comment on and mock aspects of gaming culture is even more amusing.

Besides being a decent third-person shooter, Eat Lead is probably one of the strangest and most entertaining videogames about a videogame character that pokes also fun at videogames within an actual videogame I’ve every played.

Bottom line: Eat Lead is so bad that it’s good.

Recommendation: I decree: aficionados of gaming culture must play through this game once. It’s a rote-but-acceptable shooter that’s made excellent by its self-referential ridiculousness.

Nathan Meunier hopes he will some day be able to review a game about game journalists reviewing videogames.