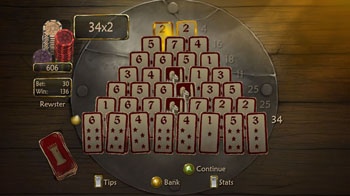 Much like Communism or an Indiana Jones sequel, the premise of Fable II: Pub Games sounds fantastic in theory. As a collection of three gambling mini-games found in Lionhead’s upcoming RPG opus, Fable II, Pub Games serves as both a preview of what’s to come and an opportunity to get a head start on your Albion bank account. So naturally, it goes without saying that if you’re not particularly interested in Fable II, this Xbox Live Arcade promo tool will capture little, if any of your curiosity. Unfortunately for those who worship at the altar of Molyneux, the games themselves aren’t particularly interesting outside the context of Fable II. Furthermore, they also don’t seem like a viable way to fatten your soon-to-be avatar’s pockets. That is, of course, unless you’re cheating.

The three games represented in Fable II: Pub Games are, for the most part, tweaked versions of real world gambling staples. The card-based Fortune’s Tower is a competitive cross of blackjack and solitaire, while Keystone is an overly complicated take on craps. The third game, Spinnerbox, is nothing more than a slot machine, so gameplay essentially boils down to mashing the A button until you run out of cash. Even then, there’s nothing stopping you from drowning yourself well into the dank pit of debt which you can then gleefully transfer into the world of Fable II upon release. Pub Games warns you that adventuring with a debt isn’t advised, but doesn’t do anything to stop you. One can only hope that debt collectors follow you around, taking back your hard-earned loot for the man.

Of the three games available, Fortune’s Tower is the only one that rewards skillful play and by skillful, I of course mean the know-how to bail out before you lose all your cash. The dealer places cards down on the table with the objective being to last until the final row is placed. The game will come to an end should two cards of the same number touch one another in a vertical fashion. Preventing this are hero cards which, with a strike of their sword, will protect the row from such a fate. It’s fast paced, easy to pick up and by far the most well-produced of all the games, but that shouldn’t come as any surprise. Lionhead’s secret helper for this title, Carbonated Games, crafted the single most successful Xbox Live Arcade title of all time, Uno. If anyone can make a quick and dirty card game even remotely exciting, it’s those folks.

Along with being the most entertaining of the three Pub Games, Fortune’s Tower also holds the honor of being the most easy to trick. A glitch has been discovered that allows players to bid the lowest amount possible, then quickly change it to the highest before the game begins. Utilizing this trick, the low amount is paid upon a loss, while the higher amount is rewarded on a win, eliminating the single biggest flaw of Pub Games: it is in no way a viable means of gaining wealth prior to Fable II without resorting to such acts. Behind Pub Games is a leveling system that regulates players to the lowest of tables until they play enough to earn a seat with the high rollers. By this point, you’ll have thrown yourself into such a debt that you’ll most likely be spending your time until Fable II‘s release just trying to erase it. Essentially, cheating takes the game from a seemingly useless pre-order incentive to merely tolerable and even then, only if you’re playing Fortune’s Tower. 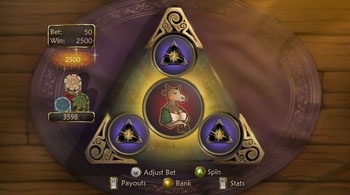 The most one can say about the craps variant, Keystone, is that it’s well presented, but nobody plays a gambling game for the visuals. Like craps, bets are placed around the table ranging from numbers to shapes, colors and the odds with a roll of the dice determining the outcome. The gimmick to Keystone is found in the arch that surrounds the field of play with each of its segments correlating to a number on the table. Should that number be rolled, the stone falls with special “keystones” preventing the arch from collapsing. Craps boils down to sheer dumb luck and only shouting quotes from The Wizard (“Spanky! Hard eight!”) makes it even remotely entertaining. Keystone falls into this trap as well, with the odds feeling stacked against you all time.

Finally, there’s Spinnerbox which is about as descriptive as you can possibly get. Much like the one-armed bandits found in Vegas, Spinnerbox steals your money, flips through the possible outcomes and then asks for more. As in Keystone, the odds feel against you as it’s very much possible to blow straight through your initial set of chips without so much as a single win. It’s the least interesting of the three games for both the obvious reasons (slot machines aren’t exactly exciting) and that unlike the other two games, it doesn’t put any twists on the old formula. Other than the fact that, you know, it’s a box. With spinners.

Bottom Line: Pub Games is a great experiment for Microsoft but it doesn’t seem to do anyone any favors. The games themselves don’t hold enough weight to interest those not already interested in Fable II and the pay outs aren’t big enough or frequent enough to be useful for those who are. Unless of course you’re totally cheating.

Verdict: If you get this for free by pre-ordering Fable II then there’s no harm in downloading and checking it out. But do not under any circumstances pay for this game under any form of currency. It may be a step up from the ill-fated Yaris, but it’s still a promotional tool and a crummy one at that.

Jared Rea is a freelance writer who, like Fox Mulder, wants to believe, only not so much in aliens but in the quality of Fable II.