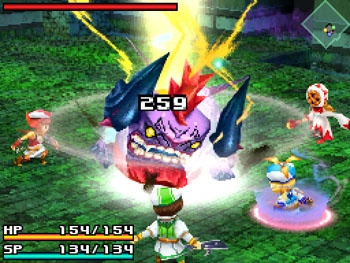 The original Final Fantasy Crystal Chronicles on the GameCube was an interesting, yet flawed, experiment in taking the series’ classic RPG gameplay in a new direction. Though a hack-and-slashified Final Fantasy was an intriguing concept, poor implementation resulted in a pricey peripheral stew of sorts; gathering together the four GameBoy Advance systems and four connecting cables (plus four players, the GC, and the game itself) required to fully enjoy the multiplayer experience was – ironically enough – a ridiculous impediment to actually enjoying the multiplayer experience. Final Fantasy Crystal Chronicles: Ring of Fates on the DS fortunately does away with much of the hassle that weighed down co-op gameplay the first time around. It also beefs up the single player campaign substantially, making this fantasy adventure a mostly win-win situation.

Ring of Fates is actually a prequel to the GC title, and the adventure takes place well before poisonous miasma covers the realm. For anyone who’s played the original, this is only notable for one simple reason: there’s no longer a need to tediously lug around a crystal chalice filled with protective myrrh that has to be dropped every time enemies approach. That alone is a pleasant improvement, but the game shows growth in many other areas.

The story revolves around the relationship between a young child named Yuri and his twin sister Chelinka. Forced into premature adulthood by hardship and loss, the siblings possess a tremendous latent power that gradually spills forth when their wills combine. An evil force, that’s also responsible for their childhood suffering, seeks to corrupt the Great Crystal that protects the planet from malicious energy radiating from the distant crimson moon, and the youths band together with old friends to put a stop to the insidious plans. The lengthy tale features many common elements and recurring themes typically woven into other games in the Final Fantasy series, but it’s constructed in an extremely thorough and absorbing manner – making great gains over the previous FFCC story.

The game’s pacing ebbs and flows between dramatic moments of tense urgency and other instances that are touching and sometimes even humorous. Excellent music and frequent voice over work accentuates the mood changes perfectly. However, while quite good in terms of quality, the timbre of the child voice actors for many of the parts is a little on the irritating side.

Early on, you’ll be cutting your way through dungeons alone (during the action-heavy portions of the game, both siblings are represented by Yuri’s single avatar), but it’s not long before you pick up three other companions who each possess different combat skills and helpful abilities that factor directly into navigating trickier levels and solving numerous puzzles along the way.

You’ll increasingly run into cleverly implemented puzzles and item-key hunts, but the emphasis is heavily placed on action, and the game has a decidedly beat-’em-up feel to it. Each character has unique attacks and powers that can be leveled-up, and frequently switching back-and-forth to find the right person for the job at hand is a necessity. In the single player campaign, the other three characters are controlled by the mostly ineffectual A.I.; they’re prone to standing around dumbly watching you carve up foes, instead of providing greatly-needed assistance. Other times they’ll get hung-up on tricky terrain or accidentally nudge one another off cliffs. 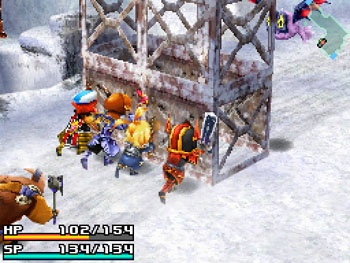 While movement, attacks, jumping, lifting, and spell casting is handled with the D-pad and face buttons. Selecting magical spells and items, checking the map, switching between characters, coordinating magical assaults, and utilizing special abilities is all done with the touch screen. Going between the two input methods can be problematic when melee with a tough group of foes is in full-swing, but it’s doesn’t have an overly negative impact on the gameplay. Once again, the magic system allows you to have team-mates pile spells on top of another for added effect. This process is more intuitive when playing with human comrades, but it’s still functional with the dim A.I.

On the whole, Square Enix has been pumping out some impressive looking games on Nintendo’s handheld system, and Ring of Fates doesn’t disappoint. The highly detailed 3D graphics and beautifully rendered cutscenes are among the best to be found on the DS. A keen effort clearly went into packing-in a large number of extra finishing touches throughout all areas of the game, and the effort yields a superb handheld translation of the GameCube original’s visual style. This attention to detail – hell, even the characters themselves change visually, when swapping out new equipment – is duly noted and much appreciated. Unfortunately, the game’s high-caliber graphics have a dark side: lag. The framerate drops slightly when there’s a lot happening on-screen. This was a rare occurrence in the singe player campaign, but it’s an omnipresent problem in multiplayer mode.

Lag aside, playing with friends using the DS’ local wireless function offers a mostly fulfilling experience, though you’ll still need four copies of the game and four DS systems. As a group, each player will create his own character, and you can then free-play different dungeon locations or choose to accept specific side-quests. It’s somewhat different from the solo-campaign, which is the game’s main focus, but it’s a good time nonetheless. Even with a few irritants, Ring of Fates excels in practically every area where FFCC on the GC did not. It’s definitely the action-RPG dungeon crawler to own on the DS.

Bottom Line: With a new story, intriguing characters, and ample gameplay updates, Ring of Fates overwhelmingly captures the good aspects and proves on the bad areas of the GC original in handheld form.

Recommendation: Buy it. Plowing through fantasy dungeons with fisticuffs and wizardry on the DS doesn’t get much better than this.

Nathan Meunier is a robot made of meat. He’s also a freelance writer with an unhealthy video game obsession.