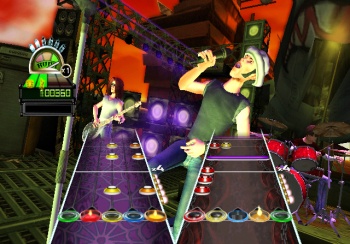 Pretending to play a piece of guitar-shaped plastic like a real instrument may not be quite on par with the awesomeness of firing off screechy arpeggios on a Flying V plugged into a cranked Marshall stack. But for the musically inept, Guitar Hero in all its forms provides a sweet, sweet taste of the power of rock.

Nintendo purists had to suffer through the lack of an available Guitar Hero experience for quite some time. When the franchise finally arrived on the Wii, it was a shred-tastic affair, but it lacked some of the bells and whistles of the PS3 and Xbox 360 versions. Guitar Hero World Tour is doubly enticing, because is seeks to deliver the robust, full-band experience of Rock Band and give Wii owners the ability to finally enjoy downloadable tracks. It does neither perfectly, yet it packs enough improvements, new features and great music to truly warrant players’ enthusiasm.

The massive bundle of equipment needed to fully enjoy World Tour is bulky enough to choke your living room. The two most notable pieces of hardware are the drum set – an entirely new addition – and an upgraded wireless guitar. Sensitivity and other issues aside, World Tour‘s wireless drums are more solidly designed and slightly quieter than the stark-white Rock Band drum kit. The three main drum pads (snare and two toms) have just the right amount of give, and the two elevated cymbal pads are a nice touch. Even on Easy, players use all five pads and the kick pedal. The realistic design and pad placement really adds to the unit’s playability. As a former drummer, I generally found playing the World Tour kit to be a very satisfying, if slightly imprecise experience.

A few improvements to the new guitar design make it far superior than the last model. It seems to handle better overall, with tighter strumming and better responsiveness. You can trigger Star Power via the standard guitar chop or by hitting a new button with your palm. There’s also a touch-sensitive strip further up the neck to let your slide or tap out notes with your fingers without having to hit the strum bar during specific sections . Additionally, you can slide your fingers across the touch strip during long notes to produce a cool “wah” effect. In the game itself, the fingering system has been greatly refined, allowing you to strum only the first note of a complex sequence and finger the remaining notes. This makes the guitar parts feel a lot tighter. A separate Wii Remote is required for the drum set and each of the guitars you’ll be using. Unfortunately, none of the instruments are compatible with Rock Band on the Wii.

World Tour‘s Career Mode allows you to play as a full four-piece band (with guitar, drums, bass and vocals) or with any combination of available instruments. Group play is almost exactly the same as in Rock Band. The only substantive difference in full-band play is that Star Power goes into a group pool that can be siphoned off in small chunks by individual players seeking to boost their score. Also, if anyone fails, you’re forced to restart the song from the beginning. Despite those two minor shortcomings, the camaraderie that comes from playing with others in a band – even a fake one – adds a lot to the Guitar Hero series without sacrificing the challenge of the solo experience. 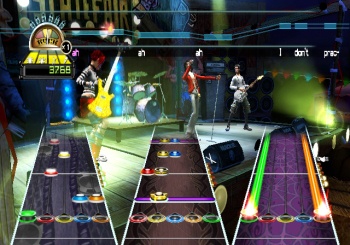 Though you can create a band with your own uniquely designed characters (or pick from a selection of old favorites), the game still follows the same old formula of unlocking one tier of songs after another to plow through. In a kind gesture, you can adjust the difficulty on the fly, making it much harder to get stuck on a single, seemingly impassable tune. You can also tweak the sound levels of individual instrument tracks to suit your personal taste. Separate career paths for guitarists, drummers, vocalists and bassists offer different set list arrangements and subtle changes in gameplay that make each uniquely enjoyable.

The song selection interface is simple and stylish. Instead of picking from individual songs within a tier in Career Mode, you’re forced to play through the entire selected tier as a single set. It’s nothing revolutionary, yet this smart design decision prevents you from skipping through songs by the many lesser known bands mixed in among the super groups. There’s a great sampling of genres and a good mix between big name artists and indie bands, and all of the 86 songs in the game are master recordings. Downloadable content will also continue to expand the immense number of songs available. To conserve space on the Wii’s meager hard drive, you can save songs purchased from the online store directly onto SD cards.

World Tour‘s highly touted, built-in music creation and editing program is unfortunately a big disappointment. Sure, it’s a complex thing to control with a steep learning curve. That will be of little concern to the hardcore players drawn to using it. The real issue at hand is the entirely limited and unrealistic sound quality of compositions produced in the program. No matter how you tweak them, the guitar sounds just aren’t good enough to make a solid instrumental tune with. Your best efforts will come off sounding like choppy videogame music – the lone musical genre that lends itself well to the feature. Other features, like the highly entertaining jam sessions found in the Mii Freestyle Mode and the impressive local and online multiplayer offerings, are far more welcome additions. Hopefully a little more tweaking will improve the music creation feature in the future.

If you’re partial to the heftier challenge of the recent Guitar Hero titles but also enjoy rocking out in a group, World Tour offers a great balance. It’s highly challenging without being quite as brutal as Legends of Rock.

Bottom Line: World Tour is just as awesome as past Guitar Hero titles – only bigger, better and with more instruments.

Recommendation: Wii owners should buy this game. For everyone else, it’s a toss up between World Tour and Rock Band 2.

Nathan Meunier feels far more sheepish about kicking over his expensive plastic drum kit now than he did repeatedly kicking over $800 worth of real drums on stage years ago.