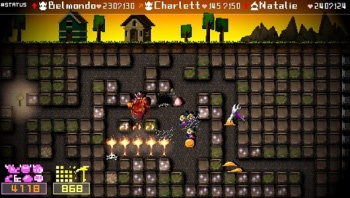 You’ve never played anything quite like Holy Invasion of Privacy, Badman! What Did I Do to Deserve This? In a gaming landscape where you can’t walk two feet without stubbing your toes on yet another Halo-clone or button-mashing action title, Holy Invasion of Privacy stands out as something completely different. But while the game’s certainly a breath of fresh air, Master Chief, Mario and the red-eyed Killzone guys aren’t in any danger of falling off the top of the charts just yet.

The game’s main mode works like this: You construct a maze to keep pesky JRPG heroes from capturing your fledgling demon overlord and preempting his plans for world domination. Unfortunately, the glitzy, glamorous lifestyle of an evil ne’er do well isn’t all it’s cracked up to be. Heroes delve into your dungeon, do their thing, and before you know it they’ve hogtied your overlord and dragged him to their castle that’s conveniently situated about two feet away from your Cave of Malevolent Intent. Then you start the whole game over again.

Despite that fact, however, Holy Invasion of Privacy isn’t too frustrating. Instead, each game over serves as a learning experience that helps you build a more efficient maze the next time around. And boy, is there a lot to learn.

The basis of your maze is the soil itself, which picks up nutrients, which create slimes, which feed creatures, which – yeah, it’s pretty complicated. Basically, your maze, which you build block-by-block, is an ecosystem. Breaking blocks that contain more nutritional value than the average hunk of dirt will yield oozes, near-defenseless creatures that move in straight lines and spread nutrients to other blocks. Depending on how many nutrients a block sponges up, it can give birth to any number of monsters, which serve as your only real line of defense against the day-saving, evil-slaying scourge known as “heroes.” Monsters, in turn, eat oozes in order to mature and grow more powerful. Thus, maintaining your ecosystem quickly becomes a tricky balancing act. 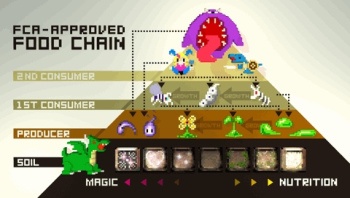 On top of that, different monsters follow different paths, and it’s up to you to construct a maze that both facilitates their movement and keeps heroes tangled in your web. For instance, dragons can only move horizontally and know no greater pleasure than belching out excessively long streams of fire. Placing the rambunctious reptiles properly is quite a challenge.

Complicating things further, moments when you can actually piece together your maze in peace are few and far between. Heroes invade at a fairly consistent clip, and if your winding paths aren’t up to snuff, you’ll be frantically playing damage control while multi-man hero teams move ever closer to your outnumbered, outgunned overlord.

And those are only the basics. Mana, the stuffing your monsters beat out of heroes, forms another of the game’s many strategic layers, as do demon pacts, which require special block arrays for optimal usage. So, what’s a confused, overwhelmed player to do? Can you say “tutorial”? Yes, Holy Invasion of Privacy 101 is, without a doubt, a required course, and it’s mostly helpful. Each portion of the tutorial explains its respective strategy and then asks you to repeat it properly, ensuring that you’ll eventually get it down. However, a few crucial aspects of the game – such as maze arrays – are never explained in enough detail, and the game has a habit of showing or telling, but rarely both. Also, the tutorials don’t leave much room for experimentation and tend to boot you back to the main screen as soon as you’ve performed the task at hand. Thus, you’ve got no choice but to move your custom strategies from the conceptual phase straight onto the battlefield, which is a great recipe for surefire disaster.

In the grand scheme of things, though, those quibbles are minor. Holy Invasion of Privacy lacks any sort of deal-breaking flaw, so if you can stomach the sometimes stiff difficulty and think there’s no better motivation for world-building than the threat of imminent death, Holy Invasion of Privacy is an enjoyable, strategically rich step off gaming’s beaten path.

Recommendation: Try it. Holy Invasion of Privacy‘s only available as a downloadable title on the PlayStation Store, so you can’t rent the full game. There is, however, a three stage demo that should give you a good feel for the gameplay.

Nathan Grayson laughed when he first saw Holy Invasion of Privacy, Badman! What Did I Do to Deserve This‘ title. After writing it until his fingers were bloody nubs, however, there were no more smiles.