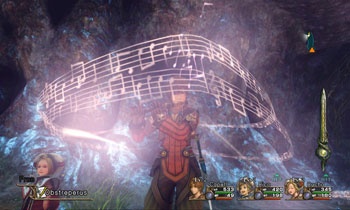 “The game is a tale that records the growth of a hero, who, burdened with a battle-filled journey, is faced with the harsh reality that… He must ultimately make a decision on what it is that must be accomplished.”
–tri-Ace director Hiroshi Ogawa on Infinite Undiscovery’s plot

Obviously, Ogawa’s kiddie pool-deep explanation of his team’s latest variation on the monomyth was purposefully vague, for fear of “teh spoilars,” but sift through his words and you’ll strike a hard truth: That description really does lend itself well to just about every JRPG ever crafted, and it’s not a good thing. Infinite Undiscovery, like the majority of its spell-slinging, attack-name-announcing compatriots, lives encased in a concrete JRPG mold – its few interesting features obscured by déjà vu’s impenetrable walls.

Infinite Undiscovery‘s overall structure is a bagged-instead-of-boxed-cereal “homage” to every JRPG you’ve ever played. From the forest where skipping down the wrong path puts you back at square one, to the ten year-old twins who destroy any sense of danger your party might be in since you can’t rightly off a child in the uncanny valley era, the game’s plot plays out like a Rick Astley-voiced ode to a plethora of your favorite JRPGs from years past.

I’m only half-kidding about the Rick Astley thing. Infinite Undiscovery‘s voice acting, lip sync, and script are downright embarrassing. If a character spits out a coherent phrase and manages to keep his/her yap open for roughly half of the phrase’s duration, it’s probably time to break out the confetti. And even once you’re finally desensitized to the cast’s total mastery of ventriloquism, you’ll never stop chuckling at their incredibly awkward speeches. It’s no stretch to say that when two characters engage in a conversation, it seems like they’re actually carrying on two separate conversations – each with no one in particular.

It’s a shame, too, because the game’s characters, clichéd archetypes though they may be, are, on some occasions, genuinely entertaining. The main character, the flautist Capell, is an especially hilarious take on the reluctant hero – not too whiny, and not afraid to poke and pry at semantics when a cute girl promises him “Anything.”

In stark contrast to the story, IU’s battle system is ambitious to a fault. Every time your eyelids start drooping due to a sense of complacent understanding, it thwacks you awake with a new element or concept. While I applaud tri-Ace for birthing such an interesting Frankenstein monster of equal parts Final Fantasy XII and Dynasty Warriors, not everything works as it should.

In all combat situations, you only have direct control over Capell, while three other A.I. party members display their pugilistic prowess at their own discretion. Sure, you can give them orders to focus on single enemies, conserve MP, and things of the like, but for the most part, they do what they want. Unfortunately, this system gets a little unwieldy when you factor healing into the equation. See, in order to munch on a healing herb yourself, you have to open the menu screen. In any other game of IU’s ilk, this would be fine, but IU is all real-time, all the time; even when menus overrun the screen, the action doesn’t pause. Thus, it’s in your best interest to grind your finger into the Y button until your generally-preoccupied party members toss a spell your way. When it works, this method of healing is fairly convenient. But when it doesn’t, the Game Over screen’s soothing, somber music won’t stand a chance when its sound-waves clash with those of your embittered — and usually justified – calls for your deity of choice to rain down Wii-motes on your television. 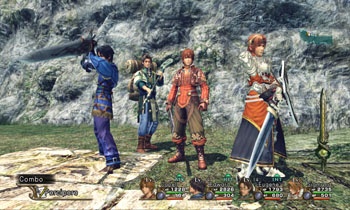 More often than not, however, things go pretty smoothly. Mashing together combos is a breeze, and your slash-happy crew is, if nothing else, competent. Even better, battles look damn cool, especially when you’re accompanied by secondary parties. These groupings of your characters – out of your control and usually aiming to complete different, but related objectives – regularly assist you in kicking up flashy, multi-colored maelstroms of violence. Unlike typical turn-based JRPG fights – which look less like actual fights and more like patty-cake with pointy implements – IU’s massive clashes look and sound like something out of an over-the-top shonen anime. (And yes, characters do call out their attack names. Incessantly.)

But as bullet-point-worthy as the multiparty system is, it tends to be a square peg in IU’s cardboard puzzle – an innovative element that simply doesn’t fit into a normal JRPG mold. On one hand, it solves the “underused party member” issue, since most party members end up in secondary parties on a regular basis. But on the other, it creates a whole new problem in properly managing all 18 characters that eventually fill out your roster. Buying and equipping new gear, for instance, is a nightmare.

To compound that issue, many characters get their “I’ve decided to help you save the world!” introduction, and then become totally irrelevant. Names? Who needs them? That’s the blue-haired guy, that’s the green-haired androgynous guy, that’s the red-haired chick who never talks, etc. And as you’d expect, it’s fairly difficult to empathize with a hair color.

With IU’s “Connect” feature, tri-Ace attempted to remedy the above issue, but to no avail. Connecting with another character allows you to bark out more specific commands to one party member at a time, allowing you access to two of their attacks. It’s a perfect foil for puzzles, at least in theory. In practice, though, the system ends up inexcusably underused, probably for fear that players would end up dragging the wrong party member into a dungeon, which would then require a vexed stroll back to the beginning of the dungeon to snag the correct character.

Really, it’s almost as though IU’s more ambitious elements would’ve found a better home in a different game. The party system especially feels like it’s a victim of tri-Ace deciding, “Hey, we’ve got this great idea, but we’d rather not risk a The World Ends With You-style flop, so let’s imitate all the cool JRPGs instead of building a game to suit our idea.” The whole situation shines a sizzling spotlight on both JRPG-developers’ reluctance to change, and the audience that drove them to become so risk-averse. Sadly, I imagine both parties will attempt to pull a 180 only after the genre’s already cleared the cliff and, well, you probably know how this ends.

However, in spite of all that, it must be said that Infinite Undiscovery is a commendable effort — a game that could’ve been great, but due to these crazy times in which we live, fell slightly short of that mark. And even though it’ll probably find its place in the history books scrunched in between Blue Dragon and Blue Dragon Plus, it should be remembered not for its cookie-cutter plot and adherence to JRPG tropes, but for its brief run-ins with near-brilliance, something that few JRPGs can tout these days.

Bottom Line: Infinite Undisovery is an illuminating experience, but definitely not because of any excellent quality it possesses. On the whole, the game clings to the coattails of its genre compatriots like a frightened toddler, but during the brief moments that it stands on its own, the game shows faint signs of greatness.

Recommendation: Rent it. Infinite Undiscovery isn’t awful by any means, but unless you’re willing to put up with a number of semi-serious flaws, this one won’t be spinning in your box for long.

Nathan Grayson knows what the term “undiscovery” means, but also realizes that if he told you, you’d have no incentive to play the game.