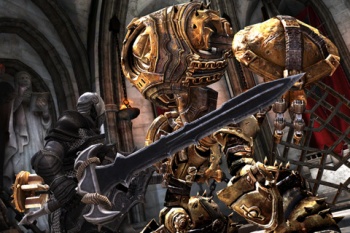 Created by Chair Entertainment and published by Epic Games for the iPhone and iPad, Infinity Blade is so beautiful, so effortlessly engaging, and so much damn fun that you will wonder what kind of hoodoo magic is going on in your phone or pad to make such an experience possible.

Infinity Blade uses the iOS version of Epic’s ubiquitous Unreal engine to create a gaming space that at first seems an unlikely fit on a phone. The style is gearhead gothic, swords and sorcery for the leather and metal crowd with a liberal sprinkling of iron spikes and nary a smooth, shiny surface spared from being adorned with a razor edge.

The game, befitting its format, cuts right to the chase, putting you hands-on with the action without a lot of foreplay. You are a mysterious swordsman, setting out to avenge the execution of your father at the hands of an all-powerful warrior monarch. Each level pits you against another bad guy to slay as you hack your way into the Big Bad’s castle for a one-on-one showdown.

Slay your enemies, loot their corpses, level up your character, rinse, repeat. That’s all there is to it. But the deceptive simplicity of the overarching narrative belies a massive amount of intuitive and innovative design. For starters, each encounter can be resolved in mere minutes. Stop the game at any time, and you’re right back where you left off, making Infinity Blade a perfect game to play in short spurts, when you don’t have anything better to do.

So how does it play? That’s another one of Infinity Blade‘s little surprises. Slashing, dodging and blocking involve touch-screen motions that are intuitive and simple. Press your thumb at the bottom right of the screen and you will dodge right. Press the bottom left – dodge left. Press the shield icon in the center to block. To attack, swipe your finger across the screen. The direction of your swipe dictates the direction of your attack, and you can chain swipes for “big hits.” That’s all there is to it.

There are special attacks and magic spells to round out the mix, but the meat of the game is slashing, dodging and blocking. The controls are easy to learn, but as with any potentially great game, difficult to master. Watching your enemy, timing your slashes to parry or take advantage of an opening, dodging left, when he swings right, blocking the overhead smash to create a break for a counter-attack – these are the tactical skills you will develop over time, as you play the game, and that will consume your thoughts when you’re not playing.

Infinity Blade with its scripted movement sections, limited exploration and “click to interact” predictability comes packaged with the ghost of lesser offerings from another milestone age in videogame design, such as Dragon’s Lair or Space Ace, but Infinity Blade brings to the table a level of interactivity those games sorely lacked. The combat can be punishing, but when your character is engaged in combat, you’re calling the shots, and your skill at reading the fight and taking advantage of opportunities will determine whether you live or die.

After each encounter you will find gold and items you can sell or equip to upgrade your character’s gear. You can also purchase gold through the iTunes store if you have no shame (I admit, I was tempted). Leveling up will also boost your stats, making your character more of a badass, and more potentially capable of making his way all the way to the end and avenging his father’s death. If not, well, what happens then is another one of Infinity Blade‘s surprises. (I’ll give you a hint: There’s a reason they call it “infinity” blade.)

Bottom Line: If gaming on the iPhone isn’t your thing, playing Infinity Blade still might be. It’s engaging, yet accessible; just deep enough to sustain your interest, but shallow enough to not make you wish you were playing on something other than your phone.

Recommendation: Worth the price, if only to get a glimpse at mobile gaming’s hardcore future.

This review is based on the iPhone 3GS version of the game.