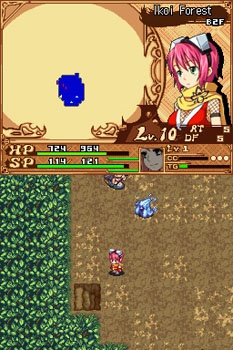 Roguelikes are a niche genre. They combine the unending toil of murdering waves of baddies with the drudgery of plumbing the depths of near-identical dungeons, then wrap the entire affair in a thick layer of cliché Tolkein-esque plot points. Fans of the genre defend them for their addictive, zen-like qualities, but to the average gamer they come off as a second job, even moreso than the MMOG genre they eventually spawned.

Izuna 2: The Unemployed Ninja Returns for the Nintendo DS is Atlus’ latest attempt at courting those hardcore roguelike fans while simultaneously pushing enough copies to the average person to ensure Ferraris and appletinis for development groups from two disparate countries.

I was all set to strike Atlus down for filling my life with even more pixelated tedium when a funny thing happened: I suddenly got it. Somewhere around the 8-hour mark, my dopamine receptors latched onto the idea that this game pushes biochemical reward stimulus with the regularity of a Cuban doctor. I don’t know if it’s the cleverly written, self-conscious characters or if I’m a sucker for stat advancement, but I’ve logged something like 60 hours in Izuna 2, and plan to keep playing, despite the fact that the game really isn’t “fun.”

In the sequel, Izuna engages a number of quests that all somehow tie into the overarching “my friend needs to find her sister” concept presented early in the game. Like any roleplaying title, each quest takes you to new areas, gives you reason to slaughter endless hordes of enemies and generally frames the actual gameplay.

Gameplay in Izuna 2 is classic roguelike fare. You enter a number of more-or-less distinct, randomly-generated dungeons in a quest to reach the bottom and whatever big baddie or key plot element awaits you. During your spelunking, you battle endlessly replenished mobs of adorable enemies, all of whom offer you crucial experience points and items. Unlike newer roleplaying titles, though, boosting your character’s stats is crucial. You will die many, many times in Izuna 2, and the only way to eventually reach the end is through killing literally thousands of these enemies. If you die in your attempt, you’re simply returned to the town from whence you came; ready to dive back into the dungeon for another go-round, this time with all the experience you accumulated on your previous attempt. Eventually, you will reach the end, but as you can guess, you’ll be traversing the same areas often. 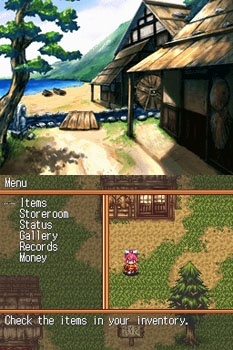 Thankfully, unlike the first Izuna, you aren’t forced to quest alone. Izuna 2 offers players the chance to drag along one of Izuna’s companions as playable alternate characters. Each character has their own strengths and weaponry they can use, and more importantly, having an additional character with you ensures that the partner can continue on when you’re inevitably overwhelmed by enemies.

Not only does this serve as a handy extra life, the additional character also provides a stunning (for the Nintendo DS) super attack once your power meter is filled. Each combination of characters has their own, unique screen-clearing assault, and when facing down 10+ enemies, these attacks are invaluable, as well as entertaining.

These gameplay quirks do little to distract from Izuna‘s basic premise, though: Kill endless foes and move on. Though it worked so very well in games like Diablo, Izuna lacks that game’s solid feeling of accomplishment. Instead of finding ultra-rare items at random that urge you on for even greater treasure, any item you find in Izuna 2 will not only disappear whenever you die, they will also break extremely quickly, rendering your weaponry useless. Yes, there are ways to counter both issues, but you’ll still find yourself wielding splintered swords far too often.

As a result, the average gamer — even the supposed “hardcore” — will most likely find Izuna 2 to be frustratingly difficult, or at least mindlessly tedious. Fans of the roguelike genre, who thrive on this sort of difficulty, will love Izuna 2 for its strict adherence to tradition and cleverly implemented gameplay advancements, but Atlus may as well have dubbed this thing “Izuna 2: Niche Nichey Niche Niche: Revenge of the Niche.”

It doesn’t help things that the game’s graphics are simply sub-par compared to the console’s best. The stunted animations and simplistic character designs are necessary to create a game of this scope — it really is immense — but on first glance the whole thing looks like a GameBoy Advance title.

Surprisingly, the aural cues in the game suffer none of these issues. A huge number of vocal samples and well crafted songs punctuate every section of Izuna 2, and purists will be pleased to learn that all voiceovers maintain the original Japanese audio.

While I can’t really recommend Izuna 2 to the average person, I’ll wholeheartedly endorse it for those looking for a handheld title to suck hundreds of hours of their lives away. If you can look past the game’s sparse trimmings, you’ll discover a deep, endlessly nuanced quest that offers an immense sense of satisfaction once you toil enough to earn it.

Bottom Line: I enjoy Izuna 2 on a near-daily basis, but the lazy, or the busy, need not apply.

Recommendation: If you’re a fan of endless dungeon crawling, and have a few hundred hours to kill, give Izuna 2 a shot. The game’s $30 price point is certainly not indicative of how much content is packed into the thing.

Earnest Cavall is the third shogun of the Heian Period, owing mainly to his “huge tracts of land.”