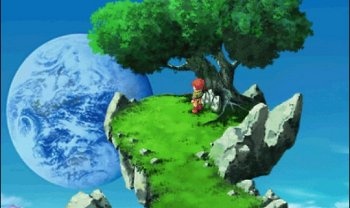 There are remakes, and then there’s Lunar: Silver Star Harmony. But unlike many so-called “remakes,” which tend to hide behind the word in place of its cruder, more derogatory cousin “port,” Silver Star Harmony is a remake in the most literal sense. Nearly every aspect of the game – environments, voice acting, dialogue, etc – has been given some form of facelift, but all the changes are skin-deep. Underneath the fresh coat of paint beats the heart of a classic Sega CD RPG.

This isn’t necessarily a bad thing, either. The word “classic” gets thrown around far too often these days, but Lunar definitely deserves the title. Even its story, which centers around a Plucky Band of Young Heroes Trying to Save the World™, holds up surprisingly well thanks to a quirky yet strangely endearing cast of characters. Thank goodness too, because without them, the game’s first six or so hours – during which the plot may as well have called in sick – would be unbearable. After that, though, Silver Star Harmony picks up steam and never really slows down.

Granted, even after putting the pedal to the metal, Silver Star Harmony’s far from the fastest RPG on the block. Dungeons tend to be lengthy and – depending on your tolerance for spelunking – can overstay their welcomes. And while the game is full of monsters that’d rather fall on your sword than live to see you take one step of forward progress, your real enemy, without a doubt, is Silver Star Harmony’s loading screen. Every time you enter or exit a location, you’re met with a five-to-seven second load time. That may not seem like much, but – believe me – these things add up. In fact, while Lunar mostly benefits from its move to the PSP, loading … screens … around … every … corner … make a compelling case for skipping this version and cutting your teeth on a different Lunar game instead.

The game’s battles are also a teensy bit slower than what you’ve probably come to expect after playing modern JRPGs, but they’re varied and strategic enough to make up for it. Sure, at its core, the turn-based battle system is traditional “FIGHT, MAGIC, ITEM, RUN” fare, but you quickly unlock a number of flashy abilities that ensure you’ll rarely feel the need to crack a magazine while saving the world from impending doom. Plus, even when you find yourself bogged down in a syrup slick of pointlessly easy enemies, the game offers an AI battle option that puts your team on autopilot.

While Silver Star Harmony’s age shows a bit in its battles and general pacing, its visuals aren’t wrinkled or graying in the slightest. This is because all of the game’s characters and locations have been rebuilt from the ground up for the PSP, resulting in fluid hand-drawn 2D that looks right at home on the PSP’s glossy screen. The redone script, on the other hand, is a mixed bag. While this translation aims to be more faithful to the original source material than its pop culture-laden predecessors, it’s still a bit too over-the-top in some respects, obscuring many instances of would-be drama with a thick layer of cheese. Which isn’t to say it’s all bad. The script’s undoubtedly clever, and even had me laughing out loud on a couple occasions.

On the whole, Silver Star Harmony’s a fine RPG. And while I’d stop short of calling it a must for any PSP-owning RPG fan, it’s still a light-hearted good time – long load times and all. If you’ve never played Lunar before and have been wondering what all the hubbub’s about, Silver Star Harmony’s the best place to start.

Bottom Line: Lunar: Silver Star Harmony’s core mechanics may be more than a decade old, but thanks to redone graphics, voice acting, and dialogue, this one still has plenty of spring in its step. And while frequent load times and some pacing issues mar the overall experience, it’s still an enjoyable RPG that never takes itself too seriously.

Recommendation: Buy it if you’ve never played any of Lunar’s many incarnations before and have been looking to sink your teeth into the meaty RPG series. Otherwise, rent it.

Nathan Grayson wants a wise-cracking flying cat sidekick. And it’s nearly his birthday. You know, just putting that out there.