Harold Godwinson could have been the ruler of England. The designated heir of Edward the Confessor, he defeated the Viking king Harold Hardrada at Stamford Bridge on September 25, 1066, then marched south to engage the invading William of Normandy at Hastings, on October 14. Unfortunately, instead of victory and kingship, Harold found death and defeat. William went on to become “the Conqueror” and founded a line of kings; Harold was the last of his dynasty.

Medieval II: Total War is the Harold Godwinson of wargames. It could have been my king but will instead likely be the last Total War game to which I swear allegiance.

Every Total War since has moved in the strategic direction. The strategic game has been given added layers of complexity to the point where it almost exceeds Civilization for complicated turn-based play. Meanwhile, the tactical battles have become less historically accurate, more akin to standard RTS micromanagement than to realistic confrontations.

Historical military formations were very slow, and their ability to maneuver was quite limited. Command and control was awful. Battle was slow and plodding. Once the battle lines were drawn, a general could commit his reserve or lead a unit into a charge, but was otherwise sharply limited in his ability to control his forces. The single biggest decision of every historical battlefield commander from the Macedonian Conquest to the War of the Roses has been drawing up the line of battle.

Shogun: Total War, with its clumsy forces, slow movement and limited control scheme, came close to capturing this reality. Medieval retained most of the tactical historicity of Shogun, though battles were notably more fluid. Rome abandoned historical realism almost entirely with cavalry that moved like cars and command-control that Colin Powell would envy.

I had heard mutterings that a fair number of grognards were disappointed in Rome for that reason. And in speaking with developer representatives at E3, I’d been told to expect Medieval II to be more realistic than Rome, so I had high hopes that the trend away from historical accuracy would reverse itself. 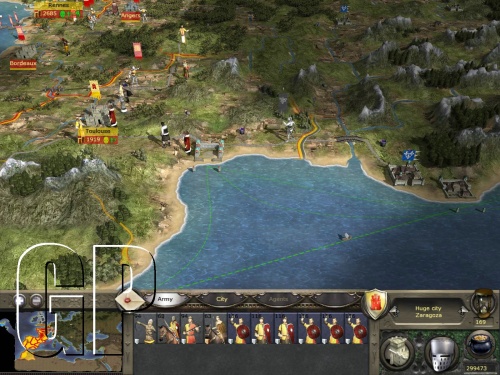 Sadly, it did not. Tactical battle in Medieval II plays pretty much like Rome, except with even smaller unit sizes – meaning even more micromanagement! The level of individual detail is increased, with thousands of individually animated soldiers marching and dying with a mouse click, but the result is largely devoid of historical realism. It might look impressive, but this isn’t war as Richard Coeur De Lion fought it. In Medieval II, entire formations can basically sidestep to avoid incoming cavalry charges. My friends, the Saxon fyrd did not sidestep.

The evolution is the same on the strategic side of gameplay: “Rome plus.” Medieval II retains Rome‘s operationally detailed map, its mission structure and its depth of strategic play, then adds more depth in the form of religion and trade mechanics. But in building its strategy game on Rome‘s model rather than its namesake’s, Medieval II loses the schiltrom among the spears (or the forest among the trees).

In historical warfare, castles and walled cities were obstacles for an opposing army’s conquest. An invading army could not march to battle with an occupied castle to its rear; its supply lines would be vulnerable to raid and harassment. Faced with an enemy in a castle or walled city, an attacker had only four choices: retreat; invest the settlement with a portion of his army to prevent its garrison from harassing his rear, while his main army drove on into enemy territory; besiege the fortifications with his whole force with intent to capture it before advancing; or draw the garrison out to battle by laying waste to the countryside.

In this light, the original Medieval was abstract but realistic enough. The Risk-like strategic map abstracted the maneuver of armies by demanding you conquer a province through battle or retreat. There was no need for supply line mechanics, as one could never be without a line of supply to a friendly province. You owned the province once you defeated its army on the field of battle, then you besieged their castles so you could safely advance to the next province without them in your rear. It worked.

Medieval II uses Rome‘s more granular map, which permits your armies to march across lands by your choice of routes and demands that you capture settlements to show your control of the surrounding area. Yet there are still no mechanics for supply lines. As a result, you can bypass settlements as you think proper, marching past mighty castles freely to dominate the countryside. Except that in Medieval II, the countryside is meaningless apart from its castles and walled cities. So you end up besieging settlements not to cover your rear as you seize territory and give pitched battle, but rather because settlements are … just what you have to attack.

Of my 30 biggest engagements in Medieval II, 28 were sieges and only two were pitched battles in the countryside. In contrast, of the 30 biggest historical engagements from Chalons (451) to Bosworth Field (1485), only two, Lisbon and Constantinople, were sieges. The rest were pitched battles. Medieval II has the raison d’etre of medieval fighting entirely backward, and it shows.

Given that what I really want from Total War‘s strategy game is a framework for fighting lots of historically plausible battles, I find the entire strategy game fundamentally broken. As with the tactical battles, it looks good but it isn’t good history. Creative Assembly chose to make a game different than what I wanted. Harold Godwinson wasn’t a bad general; just not the right man to be king. And Medieval II is not a bad game; it’s just not for me.