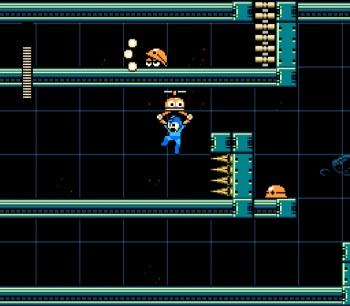 Ah, Mega Man, most Japanese of cyborgs. While RoboCop mows down his foes with a fully automatic 9mm handgun, you deploy bumblebees and lay concrete. The Six Million Dollar Man has bionic legs that allow him to scale over obstacles in a single slow-motion leap; you summon a spring-loaded terrier. You’re part Swiss Army knife, part Pinocchio: eminently useful, undeniably pathetic.

Mega Man is the product of a country where the superego has won a decisive victory against the id, where every man is a repressed drill sergeant and every woman an overbearing Catholic schoolteacher. Where strict order and authority are so thoroughly institutionalized that a sharp slap on the wrist feels like curling up with a warm blanket. Not surprisingly, Mega Man 9 provides both these sensations in spades.

With the exception of a couple modern touches, like unlockable game modes and a surprisingly robust achievement system (and minus the necessity of blowing on a cartridge until you hyperventilate), Mega Man 9 is an NES game, pure and simple. Everything from the 8-bit graphics to the chiptunes soundtrack to the crude storyboard narrative feels like an extended flashback to my youth. But flashbacks aren’t always sunshine and lollipops. Sometimes they’re prehistoric, fluorescent lizards chasing you through a maze of ex-girlfriends with tranquilizer guns.

Mega Man 9 presumably requires patience, practice and perfect timing to complete. I say “presumably” because I wasn’t able to finish it, and not for lack of effort, either. After 5 hours, 42 minutes and, by my estimation, two dozen “game over” screens, I put the controller down on Stage 3 of Wily’s castle, the second to last level of the game. I wanted to beat Mega Man 9, but couldn’t. There are few things more disheartening than failing at leisure.

Sadistic level design isn’t the sole reason for MM9‘s steep difficulty curve. It’s also due to the developers’ willful ignorance of nearly two decades of game design innovation. Case in point: the jumping mechanic, which adjusts the height of your leaps according to how long you hold down the A button. It’s a direct holdover from the original NES controller, which lacked the pressure sensitive buttons that have become standard on modern gamepads. The most hellish corridors in MM9, of which there are many, place you in situations where either falling short of your target or jumping too high results in instant death. Whether you find this scenario adrenaline pumping or arbitrary will probably depend on how many times you’ve died in a row in the same spot. (For me, the cut-off point was three times.) 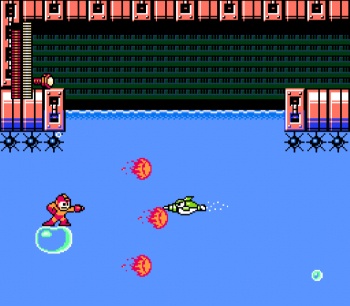 Other design decisions are less maddening but equally tedious. You still have to pause the game to switch weapons, and you still have to select the weapon you want to reload for ammunition capsules to have any effect. This made sense in the NES era, when controllers had only four buttons and a D-pad. When you’re attempting to replenish your ammo before a boss fight, however, you spend more time in the “pause” screen than actually playing the game.

Most inexcusable are the anemic Save and Navigation functions. There is no “return to stage select” option, meaning selecting the wrong level requires you to die three times to correct your mistake. (Luckily, insta-death spikes and bottomless pits are plentiful.) Furthermore, saving your game only records your inventory and the bosses you’ve killed, not any mid-level checkpoints you’ve achieved. To my horror, the game counts Dr. Wily’s castle as a single level with no less than eight checkpoints, so plan to block off at least an hour of your time if you want to make a serious attempt.

With so many artificial barriers to your enjoyment, it’s a wonder that Mega Man 9 is entertaining at all. But in between cursing impotently at your television, storming out of the room and weeping softly into your pillow, there’s genuine fun to be had. A number of levels introduce new gameplay mechanics like swinging platforms and portals that preserve your momentum. And the feeling of killing a boss and gaining his special ability is incredibly satisfying, in no small part because of their difficulty.

In recent years there’s been a resurgent interest in resurrecting old franchises and game mechanics and incorporating them into new projects. Earlier this year, Bionic Commando Rearmed debuted on the Xbox 360 and PS3 to generally favorable reviews, and Castle Crashers took Golden Axe-style gameplay and infused it with a much-needed sense of humor. Mega Man 9 is perhaps the purest of these revivals, pinching not just its predecessors’ design mechanics but their aesthetic. It might be more authentic, and it’s certainly more familiar, but sometimes nostalgia reinforces a painful truth: You can’t go back again. Time marches on, progress happens and it’s up to developers to save … er … acknowledge it.

Recommendation: If you want to save $10, an NES emulator and a couple ROMs will probably get you where you want to go.

[Ed. note: Upon review, we have determined that NES emulation software may be illegal. The Escapist does not condone piracy.]