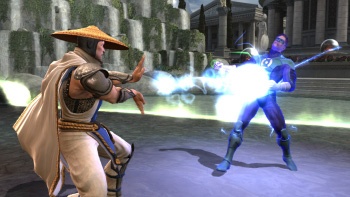 Greetings, land-dwellers! My human name is Arthur Curry, though I have also been known as Orin. My friends, super or otherwise, call me Aquaman. I was one of the founding members of a little thing called the Justice League of America back in 1960. (Wow! Time sure flies when you’re the sworn protector of the seven seas and all the teeming life they contain!) So when I heard that Midway was developing a videogame that pitted the mightiest heroes from the DC Universe against the rough-and-tumble warriors from the Mortal Kombat franchise, I was pretty darn psyched.

How faithfully would they recreate my iconic orange and green costume? Would there be an underwater level featuring my loyal ally Tusky the walrus looking on in the background? Of all the fearsome villains I’ve battled over the decades, who would be considered nefarious enough to include as a playable character? Would it be the ruthless treasure hunter Black Manta? Or my tragic half-brother Ocean Master? I was also curious to see my “Heroic Brutality” finishing move. Would it involve me calling upon my playful, chattering friends the dolphins? Or would I literally “drop anchor” on my foe?

So many questions. But before I had a chance to play Mortal Kombat vs. DC Universe, I received a garbled telepathic communication from Martian Manhunter and boy, did he sound mad. Apparently he hadn’t been included in the DC roster, although that despicable mercenary Deathstroke had somehow made the cut.

I commiserated with J’onn, and expressed surprise that a franchise that routinely features combatants from other dimensions, often with multiple limbs, would balk at including a green-skinned alien. J’onn muttered something darkly about Market Forces, a villainous super-team I haven’t yet encountered. Then he dropped the real bombshell: I wasn’t in the game either! By Poseidon’s sacred conch, what subterfuge was this?

My first instinct was to cleave through the Atlantic and strike at Midway’s Chicago base like a vengeful trident. But then I realized this oversight might be a blessing in disguise. Just as I had once found true freedom by relinquishing my birthright to rule Atlantis, perhaps I would better enjoy this game by experiencing it as one of my fellow heroes – Green Lantern, say, or the Flash (although, to be honest, I do not consider the ability to move quickly to be a true superpower – just don’t tell Barry I said that).

The framing narrative reveals the worlds of Mortal Kombat and the DC Universe are merging, sparked by the unholy fusion of villains Shao Khan and Darkseid into a new entity: Dark Khan. Two separate eight-chapter story modes weave a convoluted but interlocking tale of rage and cosmic confusion. The characters may remark, perhaps too often, that everyone’s innate power has been redistributed – the better to explain why my friend Clark Kent does not easily triumph – but the storyline is still more convincing than many recent comicbook crossover events. 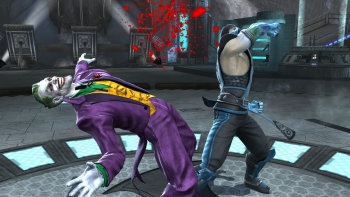 And what of the combat? MK vs. DCU abandons weapons for the most part, so hand-to-hand is the order of the day. There’s still a satisfying, jerky heft to the various kicks and punches, including the traditional Mortal Kombat uppercut that, if I may venture, is still the most satisfying in all of videogamedom.

The rapid, grunting flow of one-on-one battle is occasionally punctuated by special events, such as ramming your enemy through a series of walls or tumbling them off a ledge and continuing the fracas in mid-air. (For those who haven’t experienced such things for real, as I have, these must be thrilling additions.) Additionally, a specific grab – entitled Klose Kombat ¬- initiates a short, brutal sequence of guessing-game button-presses that essentially boils down to Scissors, Paper, Headbutt.

My young ward, Aqualad, seemed slightly crestfallen that the Fatalities for this Mortal Kombat had been toned down to achieve a more favorable rating. Once I had been instructed on how to achieve these spectacular finishing moves, though, they seemed far from tame. Aqualad also complained that despite the fact I was a relative beginner, I was still able to defeat him on occasion by stringing together impromptu combos and repeatedly using some of the easier special maneuvers. I grew particularly fond of Liu Kang’s intense fireball and mid-air woogly-woogly-woogly kick. For his part, Aqualad claimed the Joker had a surprisingly deep move set, and certainly every time I tried to take him on in the guise of Bruce, I had my cowl handed to me. Batarangs, it seems, are no match for an extendable boxing glove and a handshake shocker.

These hours spent fighting against a human adversary – either in the same underwater cave or online – showcased the game at its bloodthirsty finest. I confess after finishing the two single-player story modes, there was little further incentive to play through the requisite 10 bouts with each separate character; my preference in both videogames and real life is to incapacitate foes in seconds, yet the surfeit of mini Kombat sequences can often slow progress against computer-controlled opponents to an unedifying crawl.

Introducing new blood from the DC Universe and limiting the roster to a mere 22 characters has undoubtedly refocused and reinvigorated this ailing series. And while I may not entirely agree with the casting, I realize things could be worse. I have no ego, so at least I can still enjoy the satisfyingly scrappy combat. I can only imagine how the similarly redacted Johnny Cage is feeling …

Bottom line: This robust but ultimately one-dimensional fighting game will elicit cheers from Mortal Kombat fans, while also enabling DC acolytes to settle some age-old debates. I do fear for its longevity, however.

As told to Graeme Virtue, a freelance writer based in Scotland. He wrote about his numbskull urge to finish mediocre PS2 action-adventure games in Issue 151 of The Escapist.