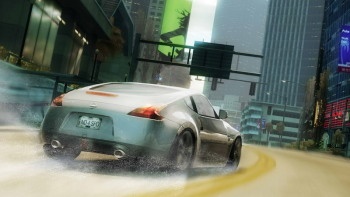 Like most people, I enjoy a good veg out. I can slob, loaf and switch off with the best of them. Give me a mild hangover, a pint pot of tea and a DVD full of mindless, formulaic Hollywood guff and I’ll sit there for hours without moving a brain cell.

But gaming really doesn’t fit into this lethargic mindset – or at least, it probably shouldn’t. I expect a game to grab me by the thumbs and eyeballs and refuse to let go – not exactly conducive to a serious bout of inactivity. Unfortunately, Need For Speed: Undercover caters firmly to the couch potato crowd: It demands little effort, expects stupidity in its audience and more or less provides an alternative to watching a Fast & the Furious movie marathon.

It may be a horribly pretentious thing to say, but this really is a game for the mindless masses. Masses don’t play games – individuals do, and they’re generally not mindless enough to wring much enjoyment from the flat difficulty curve and daffodil-weak storyline of NFS: Undercover. Not that the Need For Speed franchise has inspired us to expect much in the way of character development or plot depth – this is a series built on burnt rubber and a diet of thick dust – but hating yourself for partaking in such trite and macho endeavors doesn’t really put you in the right frame of mind to enjoy toeing the cops and robbers party line.

Which is a shame, as fans of the series may fondly recall the police chases of previous NFS titles Hot Pursuit and Most Wanted. These were a great addition to the usual circuitous races and reminded us that driving games could provide tension as well as speed. Casting you as an undercover cop attempting to infiltrate a criminal organization by talking a bit tough, frowning a lot and driving recklessly, NFS: Undercover at least resurrects the best bits of the previous games, even if it falls on its ass when the wheels start to spin.

How you’re supposed to bring this syndicate down from within is left pretty vague for most of the game – considering all the jobs, challenges and face-offs against other criminal types you’re called upon to complete – but the premise is so feeble that it doesn’t really matter anyway. Getting behind the wheel without having to pimp your ride three times (like so many EA racing games) is what’s important, and in that respect Undercover is on the ball. All the checkpoint chases, one-on-one drag races and collateral-damage escapades are there with bells on, as is the aforementioned Pursuit mode from the earlier games. 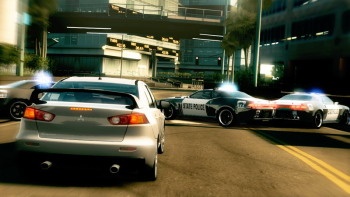 These are the highlights of Undercover, just as they were with Most Wanted and its kin. Luring cop cars into underpasses or bridges, then swerving to block the road is pretty damned entertaining, as is trying to outrun a helicopter or simply losing a tail. More importantly, they also serve to break up the tediously effortless remainder of the game.

Lots of open-world driving games are guilty of pandering to the lead-footed racer (Burnout Paradise, I’m looking at you), but NFS: Undercover is by far the most simpering, poncey and forgiving racer I’ve ever been violated by. Drive headlong into a corner, and your car miraculously bounces into the right direction without losing any revs. Pointing the car in the general direction of the finish line and staying on the accelerator pretty much ensures success – be it a time challenge or a high-speed escape. With little reason to ever let up on the Go Faster pedal, the game becomes an exercise in winning without trying.

After more hours than a gamer should have to endure to mine their way to the essential core of a game, Undercover finally (and reluctantly) reveals its qualities. The A.I. eventually decides to compete, and the time limits drop to a level where skillful cornering actually matters. But we’re talking eight to ten hours here, and considering the pitifully easy difficulty curve up to that point, your interest will likely have waned to terminal levels by this point.

The ingredients are all there for a decent, if superficial, driving game. Unfortunately, there are also technical issues conspiring against Undercover that are difficult to forgive on the current generation of consoles. The game sheds frames to the point of severe screen tearing, and its feeble particle effects would have looked bad on the PS2.

Perhaps kids who are progressing from Spyro and other cutesy platformers would enjoy Undercover, a long and flashy game they can coast through without frustration or effort. But anyone who’s ever owned a wheel peripheral will find it too low brow to tolerate.

Bottom line: Need For Speed: Undercover contains all the components to make the next installment of the Fast and the Furious franchise. Unfortunately, that doesn’t make for a decent game.

Recommendation: Leave it. Unless you’re looking for a stepping stone between cutesy platformers and real racing games, the only challenge this game offers is perseverance.