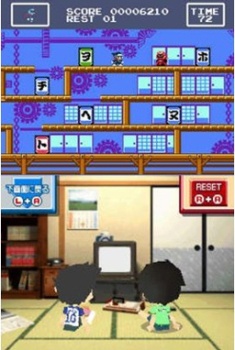 Retro Game Challenge? What kind of name is that? In this age of flashy titles like Chronicles of Riddick: Assault on Dark Athena and Kingdom Hearts 358/2 Days, that’s not going to draw many eyes. And its at-a-glance description? A collection of bite-sized, no-frills games? Like we haven’t seen a thousand of those on the DS already. Really, everything about this game seems to fly in the face of what today’s savvy 18- to 34-year-old gamer wants out of an interactive escapade.

And yet, that’s why it works so well. In actuality, Retro Game Challenge‘s title says it all. Just like games in the days before colons and “clever” acronyms became titling canon, Retro Game Challenge doesn’t mince words. No befuddling complexity here – the game, through its 8-bit blasts from the past and pitch-perfect presentation, seeks to fling you back to a time when both gaming and life were easygoing and idyllic.

In fact, my favorite aspect of RGC isn’t even the games. It’s the menu screen – if you could even call it that – that, in my eyes, really gives the package its retro-chic sheen. Said “menu” features your eightish-year-old avatar and a naively innocent past incarnation of the game’s antagonist sitting in front of a TV screen, Famicom-esque gaming console to the right and game shelf to the left. When you’re not participating in RGC‘s … well, challenges, your companion excitedly chats with you about all kinds of seemingly trivial stuff like school, TV and, of course, the latest videogames. You know, the kinds of things that were basically the be-all, end-alls of every self-respecting nerdling’s world. It’s that carefree atmosphere that captures the essence of nostalgia in a way Blue Bell ice cream commercials only wish they could.

That’s not to say that the Game Challenge portion of RGC is a snoozer, however; even without the delicious nostalgic icing, this cake could stand alone. See, the gaggle of games included on RGC‘s cart isn’t some recently uncovered treasure trove of ’80s sleeper-hits. Instead, as with titles like Mega Man 9, they’re lovingly crafted approximations of all the games that make codgers coo, and they’re full experiences at that. Take, for instance, Cosmic Gate. It’s a 2-D shooter that most closely resembles Galaga, and it goes to ridiculous lengths in order to replicate that experience with eerie accuracy; bunches of levels, enemy types of all shapes and varieties, and even cheat codes – not a pixel was left unpolished. Long story short: These clearly aren’t mini-games.

But there’s a catch. You can’t play all eight of RGC‘s little big games right off the bat. That’s where the Challenge bit comes in. See, the story goes something like this: You’ve been forcibly flung into the past – and also Japan – by a maniacal TV show host with a huge inferiority complex. In doing so, Mr. Demon Arino – who kind of looks like a combination between the Matrix and Dr. Kawashima’s disembodied head from Brain Age – hopes to run you through a series of challenges, each set by his own prior accomplishments, in order to appease his deflated ego. Uh, yeah. 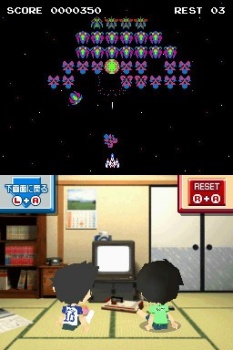 Arino’s challenges take the form of four specific accomplishments within each of the eight games, ranging from “Jump on and defeat two enemies” to “Beat this whole game without getting a game-over.” After you’ve leaped, shot, raced or leveled your way through all four of a game’s challenges, that title is unlocked in freeplay mode, where you’re able to explore its every nook and cranny without any challenge-imposed restraints.

Don’t think that challenges are just tedious warm-up sessions for freeplay, though. Extremely well-designed and perfectly paced, challenges keep the game perpetually fresh and entertaining. After all, even if, say, the top-down racing antics of Rally King have you cursing up a storm, Guadia Quest’s dungeon crawling and Star Prince’s alien blasting are just around the corner. There’s something for pretty much everyone as long as you’re willing to spend 30 or so minutes unlocking it. And challenges are varied enough that – even if your hate for a certain genre has inspired epic poetry – you’ll likely have more fun than you’d expect while “tolerating” its quick appearance in Retro Game Challenge.

The only real problem with RGC‘s by-and-large excellent lineup are the “sequels.” Two in particular, Robot Ninja Haggle Man 2 and Rally King SP, are essentially retreads of games whose challenges you may have just conquered minutes earlier. Granted, that could very well have been an intentional decision on developer indieszero’s part. RGC parodies because it loves, and making fun of over-sequelization in the gaming industry is topical if not necessarily enjoyable. Other examples of the game’s fun-poking prowess: innkeepers in Guadia Quest who ask, “Do you feel asleep?”, a fictional magazine called GameFan with “articles” by actual games journalists and an entire game created for the sole purpose of product placement. While playing Retro Game Challenge, you’ll laugh – aptly enough – like an excited child.

But the above jabs are only that. RGC‘s jokes are good-natured, and the game truly is, above all else, a love letter to the good ol’ days of gaming. Whether it’s in-game magazine articles building your excitement for the upcoming “releases” you’ll soon unlock, young Arino’s excited yelps when a game gets interesting or simply the absurd amount of detail present in each game, RGC exudes a palpable passion for that which it lampoons. Rarely do such great intentions mesh with top-notch game design, but in this case, everything’s in near perfect order.

Bottom Line: Retro Game Challenge beautifully encapsulates nostalgia, not only through its mostly excellent collection of games but also through presentation so accurate that it nearly defies description.

Recommendation: Buy it. RGC is easily one of the DS’ best, most unique titles. Even if you missed out on gaming’s formative years, here’s your chance to rectify that mistake/chronological impossibility.

Nathan Grayson thinks that a villain whose ultimate objective is to force you to play videogames is probably not much of a threat.