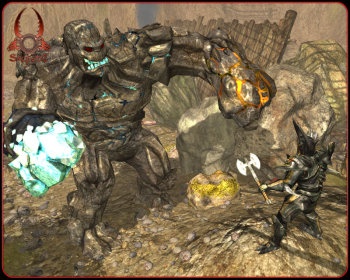 Bigger isn’t always better. But modern RPGs aren’t satisfied unless everything about them is measured in acres, gigabytes, mountain ranges and millennia. For many of us mortal gamers, plunging into the depths of vast alternate realities can be a wearying experience. The exasperation eventually passes, but it takes a doggedness of spirit to rise above the earlier levels’ trivial errands. Sacred 2 takes exactly this kind of determination to enjoy, but there are jewels in the dirt to be found if you bring a sturdy shovel.

Life in Sacred 2‘s world grows from a genome of RPG clichés. Thankfully Ascaron doesn’t take these storyline rules too seriously, flouting them subtly to reassure gamers that playing Sacred 2 isn’t just an endurance test. The blind mage who spells out your fate could easily be a drunken (albeit eloquent) dupe, so your epic quest begins not because of some unfulfilled heroic destiny, but in spite of it. Big games demand big choices, and for once you genuinely feel as though you’re choosing to assail the five other races with whom you no longer wish to share the planet, rather than being goaded into epic battle.

The inhabitants of Sacred 2‘s Ancaria each makes their own particular use of a divine element known as T-energy to bend the world to their will. The elves build a technological utopia, while the more feral races like orcs and humans squabble over who controls this power. It’s here that Sacred 2’s loose plot lines kick in. It’s a standard score, but one that’s easy and comforting to dance to, particularly in a game of such scope.

Character designs go beyond choosing a class. Don the cloth cap of a warrior, mage, ranged fighter, pneumatic demon or elf and you your vertical climb of branching skill-trees to plunder them of RPG apples. Developing your character into a uniquely-tuned warrior is a significant part of Sacred 2, and as detailed and customizable as it is, a few off-the-shelf elves wouldn’t be amiss for those who’d like to get on with playing the game instead of repeatedly redesigning it.

This forced route of customization reaches into most every aspect of your character’s existence. Not only are spells and weapons upgraded with experience, but you can choose how to enhance them. Do you want a triple fireball or a single, more powerful shot? These small choices add up to a wealth of characters in Sacred 2 that are likely to be quite unique even in multiplayer modes.

NPC’s in this genre tend to be automated exposition machines or boots-first attackers, and that’s still true of Sacred 2. What’s unusual here is the social relationships these computer controlled characters exhibit, working out their own hierarchies that, when done asunder by an astute player, can cause bands of monsters to crumble and lose their strategy. This rudimentary social system gives Sacred 2 more depth than its winding plot would otherwise warrant. 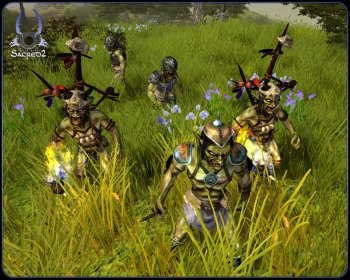 The sci-fi influence running through Sacred 2‘s fantasy realm allows for a vital injection of contemporary attitude into its otherwise dry Tolkienian stereotypes. Rather than forgoing the game’s wryly humorous side-quests in favor of progressing the overall story arc, players are likely to find themselves lured away from world-changing conquests to hunt down an orcish heavy metal band’s lead guitar. It’s cheekily delicious, and vital to keeping the player’s attention.

The original Sacred offered a peculiar take on isometric visuals that hid much of the world from fast moving gamers. Sacred 2 opens your visual range into more typical 3-D acuity, though it still feels like looking through a breakfast cereal packet with the bottom punched out. It’s hard to zoom the cameras into more advantageous perspectives, and easy to lose the breadth of Sacred 2‘s domain. What you can see is pretty spectacular, however.

Presumably due to the multi-format nature of Sacred 2, Ascaron has tried to make the controls more intuitive. The PC version even supports an Xbox 360 controller right out of the box, so the “click to set your destination” rubbish is gone, and combat (after a hefty patch, at least) is superior.

At its heart, Sacred 2 is a gift to fans of the original. But it also highlights the notion that excessive expansiveness is becoming an excuse for purposeless, meandering gameplay. If you cornered an Ascaron developer with pitchforks and flaming torches, they’d probably admit they’ve not entirely figured that out yet themselves. Linearity and clear objectives shouldn’t be considered leprous words when talking about interactive entertainment. Give me a game with this quality of development that has checkpoints and goals, and I’d be able to offer a much heartier recommendation.

Bottom line: Sacred 2 is bigger, bolder and in many ways better than the original Sacred, but a bit confused as to its own purpose.

Recommendation: If sprawling RPGs are your thing, just buy Sacred 2 already. If you’re wondering whether to take the plunge, Sacred 2 has the lightness of heart to make it a pleasant introduction to the genre.