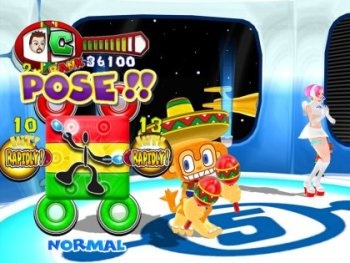 A few years back, there was a legal stramash – I think that’s the correct term – between Lady Miss Kier of Deee-Lite and Sega of America. The point of contention was the Dreamcast rhythm action game Space Channel 5, released in 2000. Lady Miss Kier claimed that pink-haired, mini-skirted cosmic go-go girl Ulala was based on her kooky Deee-Lite singing persona. (You can play at being the jury here.)

Coinkydink? According to the Court of Appeals in the State of California, Second Appellate District, Division Eight, um … yes. Citing First Amendment stuff and the California state constitution’s right of free expression, the court ruled in Sega’s favor in 2006.

What the blazes has this got to with Samba de Amigo, recently rejiggered exclusively for Nintendo Wii? Well, halfway through the Career mode – at the point where the constant maraca-shaking begins to shift from fun-filled flailing to achey frustration – up pops Ulala. And with what song does the galaxy’s favorite TV anchorwoman challenge the player? None other than Deee-Lite’s swanee-whistle anthem “Groove Is In The Heart,” a light-the-blue-touchpaper party-starter that makes “Love Shack” sound like Coldplay.

Another coincidence? Probably not. But at least Lady Miss Kier will definitely get some cash this time round. And if you have a soft spot for the ridiculous retro stylings of “Groove Is In The Heart,” you’ll probably dig the rest of Samba De Amigo too.

Originally a 1999 rhythm action arcade game created by Team Sonic, this belated Wii update was developed by Gearbox Software, the folks behind the dour Brothers in Arms series of tactical shooters. Thankfully, they’ve stuck to the classic Sega palette, striking a gleeful tone from the outset. The game’s main hub is a ramshackle Waikiki beach hut under Outrun skies, soundtracked by irresistibly bouncy steel-drum music and a disembodied Wario impersonator who enthusiastically echoes aloud any option you select. “Career!” he exclaims. “Options!” (He even manages to enliven “Nintendo Wi-Fi Connection!”)

The game mechanic remains largely unchanged from the arcade and Dreamcast versions. Armed with a Wiimote and nunchuck, one or two players align their fake maracas either up, ahead or down as directed, then apply a whipcrack shake in time with some follow-the-leader blobs. Advanced techniques include mimicking certain poses, while the new Hustle feature encourages choreographed dancing and the occasional Pete Townshend-esque windmill.

While active players will focus entirely on the vital procession of blobs, spectators can enjoy cheeky mascot monkey Amigo and his band of cartoon pals cavorting in the background in an eternally sun-kissed carnival. (as Along with Ulala, Sonic the Hedgehog occasionally turns up, too.) 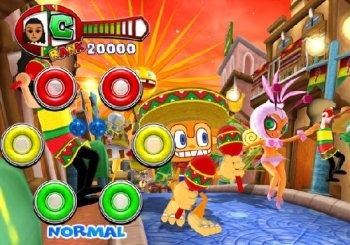 The key difference between Samba de Amigo and most other rhythm games is that there’s no penalty for shaking when you’re not supposed to, which means it’s possible for newbies to get through most songs by simply shaking everything, all the time, everywhere. (You’re only punished if you actually miss one of the blobs.) Those put off by the “ga-DUNK” sound of mistimed strums in Guitar Hero can finally relax. There is a downside to this forgiving input system, though: As the difficulty level cranks up to Hard and Superhard, you can’t rely upon it to do what you want it to – and the sense of being cheated sucks all the fun out of the experience faster than you can say “ay caramba!”

But stick to mid-level difficulty in a social setting, and Samba de Amigo is a riot, with a songwheel groaning with salsafied tracks. There are a couple of clunkers – a terrible ska cover of A-Ha’s “Take On Me,” and an unflattering version of Bill Conti’s triumphant theme from Rocky – but the good far outweighs the bad. Fizzed-up revamps of classics like “Jump In The Line,” “Papa Loves Mambo” and “Tequila” will melt any generational barriers, and even the dreaded Macarena is pretty bearable. (Additional paid-for downloadable master tracks are now available, if your flash drive can take it.)

In an attempt to bolster the package, there are also various unlockable minigames, from an entertaining Whac-A-Mole clone called Guacamole to possibly the worst attempt at beach volleyball in gaming history.

The most inspired feature is actually tucked away in the Options (excuse me, “Options!”) screen, where you can change the default maraca FX. (The sound of seeds rattling in hollowed gourds does gets a little boring after a while.) For gamers who used to run early incarnations of Lara Croft repeatedly into badly-textured walls just to hear her go “Unh!” in a repetitive, vaguely sexual manner – it wasn’t just me, right? – this makes the game suddenly reborn.

Unlock the Chau sample and your maracas turn into lapdogs, making three different barks and snuffles as you shake. There’s even an effect called, rather alarmingly, Sexy. My current favourite is Extreme, which unleashes various kung fu yelps; suddenly you’re Bruce Lee duetting with Ricky Martin. Annoyingly, most of the best noises are only unlockable in Superhard Career mode, forcing you to outwit the loosey-goosey controls to claim your sonic prize – it’s been a week now and I still haven’t managed to complete all the challenges. Reasonable grounds to sue? Probably not.

Bottom line: Rock Band and Guitar Hero obsessives, meet your Kryptonite – a rhythm game that has no truck with finicky technical skill. The maraca is not a Gibson SG. Only your dance moves can save you now.

Recommendation: Shake it like a Polaroid picture … but only at parties.

Graeme Virtue is a freelance writer based in Scotland. He wrote about his numbskull urge to finish mediocre PS2 action-adventure games in Issue 151 of The Escapist.