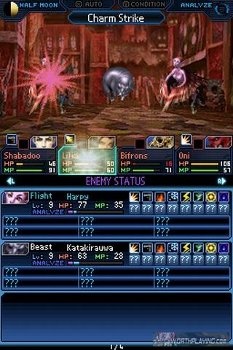 If nothing else, you can’t accuse Atlus of resting on its laurels. After cornering the market on colorfully coiffed teenagers trapped at the center of demonic apocalypses, the publisher’s decided to steer its popular Shin Megami Tensei RPG series in a decidedly darker direction. Gone are the happy-go-lucky youngsters and modern Japanese settings, and in their place we find a gritty team of soldiers strapping on their sci-fi super-suits to trek through something called a “Schwarzwelt” in the South Pole. Quite the departure, isn’t it? Fortunately, Shin Megami Tensei: Strange Journey makes its giant leap into new territory look as easy as a small step.

The game’s premise isn’t all that’s changed, either. Lest you fear that Atlus got a little too much Gears of War in your strategically rich role-playing series, however, rest assured that Strange Journey’s still very much a JRPG at its core. In fact, while the game moves its setting forward, Strange Journey reaches back in time for many of its more interesting structural elements. Going back to series roots, much of the game is a first-person dungeon-crawler, complete with an ever-expanding map and monsters lurking around every corner.

As a result, if you cut your teeth on recent Shin Megami Tensei entries like Persona 3/4 or Devil Survivor, you may find Strange Journey’s story to be a bit sparse. It’s still very well-done, mind you, but if you’re hoping for social links and frequent chats with your in-game buddies, you might be a tad disappointed. Don’t take that to mean that the series’ colorful personality’s been painted over with a gritty gray, however. Instead, it’s merely been relocated.

In Strange Journey, the series’ trademark demons are more than willing to set down their sticks and stones in favor of words. Lots of words. Adding new demons to your team, then, is a game all unto itself that’s equal parts persuasion and negotiation. They ask, you answer. If they like what they hear, they’ll be more likely to cross over onto your side of the battlefield. Better still, this is where Strange Journey’s personality really shines, with each of the game’s hundreds of demon types possessing their own preferences, ideals, and even speech patterns. So basically, the whole thing’s kind of like Pokemon, only you’re the Pokeball.

Obviously, though, when dealing with demons, talking won’t solve all of your problems. Strange Journey’s combat system – unlike many of the game’s other elements – isn’t far removed from what previous entries have brought to the table. For the uninitiated, however, it works like this: You and your team of demons (each of whom function as a separate party member) square off against the game’s hostile hellions in functional, no-frills turn-based battles reminiscent of something from Dragon Quest. Much of the battle system’s strategic depth lies in an – at first glance, overwhelmingly complex – rock-paper-scissors-style elemental system, which imbues demons and their attacks with element-specific strengths and weaknesses. Having a well-balanced team by your side, then, is crucial.

That’s where Strange Journey’s wickedly addictive demon fusion system comes in. If combat’s the bait, then demon fusion’s the hook that ensures you’ll stick around for 50 or 60 hours. Mixing and matching different demon combinations is compulsively fun in all the right ways, whether you’re a budding mad scientist who just wants to make a bunch of big, ugly monsters, or a perfection-seeking number-cruncher who wants to spend hours on end crafting the perfect party.

Really, Strange Journey gets very little wrong aside from its opening few hours, which serve as a slow-paced, thinly veiled tutorial. Granted, Strange Journey’s a pretty complex game, and the opening’s not unbearable by any means, but some better pacing would’ve definitely helped the early hours’ bitter medicine go down.

Ultimately, Strange Journey serves as another blow to the heart of big-budget, low-substance JRPGs. While the Final Fantasies of the world continue to grow their budgets and cut-scene lengths, Atlus quietly pushes the genre forward with each Shin Megami Tensei installment, still managing to spin complex yarns while doing away with tedious fluff and clutter. Strange Journey’s a worthy heir to Atlus’ growing JRPG empire, and it comes highly recommended.

Recommendation: Buy it if you’re a fan of Shin Megami Tensei, RPGs, or dungeon-crawling. Otherwise, rent it to see if it’s your cup of tea.

Nathan Grayson thinks Strange Journey sounds like the title of a long-lost “Bill and Ted” movie. If it actually is, he’s happy it stayed lost.