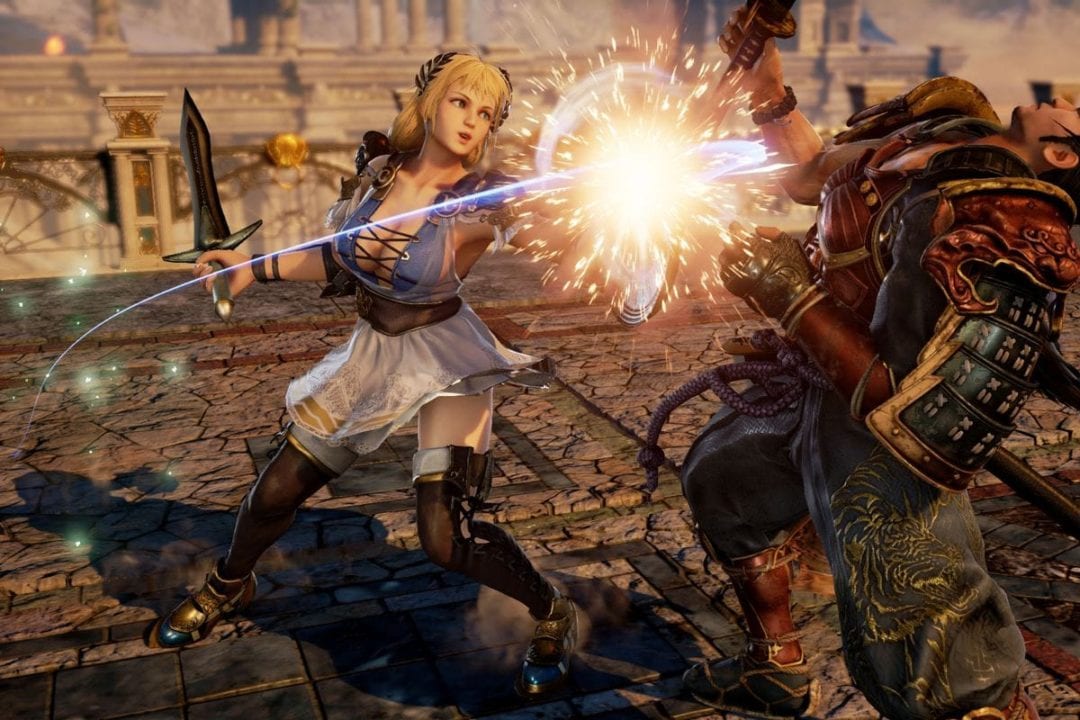 Fighting games that endure have a heart beyond pure mechanics; a unifying purpose pumping their blood. For Soulcalibur, that heart has always been its setting. The tale of swords and souls eternally retold takes place in a fantasy version of the 16th century that is startlingly consistent — in tone, in vision, in aesthetic — given how goddamn weird it is.

This is a place where everyone’s fighting over a sword with a giant eyeball in it that can end the world. Thong-wearing homunculi and stateswomen cross continents just to slap a pirate with Elvis hair across the face so hard he drops his nunchucks. Melodramatic narration that would make Orson Welles say, “Okay, that’s a bit much!” accompanies every single face off, which take place in similarly dramatic settings such as lost palaces, high plains, and fierce seas. One time Darth Vader showed up and a teenager in a sharp vest spanked him with a pair of sticks. Yet it all feels of a piece. Soulcalibur’s world is gobsmackingly silly but all the lurid art, booming orchestral music, and flowing fights work in concert. At least in its best entries. It’s been a very long time since Namco has made a Soulcalibur that didn’t flounder as it attempted to modernize. Soulcalibur VI is the best realization of the concept in 15 years.

Soulcalibur VI’s fighting is accessible, fluid, and gorgeous. Weapons define the action as much as the exaggerated characters that wield them. Learning the loping, balletic strikes, parries, and throws that win you matches has a pleasing duality: you’re figuring out how each weapon moves as much as how lithe or strong a given fighter is.

The balance of horizontal blows, vertical hits, and kicks that make up the three primary attacks in Soulcalibur has been tweaked here with new flourishes like the Reversal Edge maneuver. Tapping a shoulder button during a fight lets you wind up into a pyrotechnic slash that, if it connects, triggers a slow-motion rock, paper, scissor face off. Kicking will cancel out a vertical hit, two horizontals will cancel each other out, etc. Rather than needlessly complicating things, the speedy addition adds another welcome layer of strategy and drama to the fights.

None of the excess weight that can drown a fighting game overwhelms Soulcalibur VI. The roster is diverse without being too big. Each freak, bruiser, fop, and shouting medieval caricature distinguishes themselves with bright colors and distinct rhythms. Newcomers like Grohl, with his dual-bladed sword, eyepatch, and sexy boy band quaff; and wild magic beardo Azwel and his arsenal of phantom weapons, are unique but fit in well. Soulcalibur IV and V both overly expanded the cast while failing to add worthwhile contenders. Namco seems to have acknowledged its mistakes and none of the characters that debuted in those games return here.

Soulcalibur VI is the best realization of the game’s world in 15 years.

Geralt of Rivia fulfills the series’ tradition of adding a special guest to the crew — Yoshimitsu, the monster-masked mainstay returning in VI, was a loner from Tekken back in the original — and he’s the best one since Zelda’s Link popped up in II. The droll star of The Witcher series feels right at home in Soulcalibur’s wild world, what with his two monster-killing swords, magic spells, and improbably rakish brand of stoicism. Geralt is transported to Soulcalibur VI’s absurd version of earth by a sorceress, and once he gets there has a hell of a time getting home because of various zombified warriors and an inconvenient crush from samurai Mitsurugi. Mitsurugi really wants to fight Geralt. Just tell him you like him, dude.

All of this unfolds in Soul Chronicle, one of two substantial story modes in Soulcalibur VI that greatly enhance that big world feel. Focusing on each character in the roster, Chronicle spaces out fights between comic book-style vignettes. The Project Soul team behind Soulcalibur pulls a surprising amount of charm out of some attractive but still paintings and big, detailed drawings of its heroes. The strength of the series has always been the impression made by its macrocosm. It’s more interesting to wonder why a horny monster like Voldo haunts a pyramid and battles a Chinese swordswoman in smart blue pants than it is to actually know why. Soul Chronicle is just detailed enough to enrich.

Better still is Libra of Souls, a more involved solo mode where you build your own character and explore a map of the Eastern Hemisphere dotted with story events and quests. Libra feels like it’s going to settle into a series of one-off challenges (Every hit causes double damage! The floor is real slippery!), but then it keeps adding new wrinkles. Fun new characters like a garrulous merchant appear; you’ll unlock hireable mercenaries to fight lucrative side missions for you; you’ll team up with guan dao-wielding heroine Seong Mina and punch lizardmen until they cough up a pile of cinnamon and dishes of biryani. It just keeps evolving, drawing you in so slowly you won’t notice that a few hours have passed when you sat down to just play a couple missions.

Never as flashy and over the top as Tekken 7 or Injustice 2’s cinematic story modes, as ponderous as Dragon Ball FighterZ’s, nor as wan and cheap as Street Fighter V’s, the single-player options in Soulcalibur VI are as modest as they are rewarding. They make the series’ heartbeat stronger than ever. As I played through them, the game’s quieter achievements got louder. At no point did it seem like Soulcalibur VI was bilking me for more money, hiding itself behind paywalls, in-game currency, or a need to establish the game as an esport attraction. Even the series’ pandering male gaze has been scaled back from its nadir. Make no mistake, it’s still here, but an abundance of sex objects is no longer an unwritten back-of-the box feature. The focus is always on the characters, their tools, and the place they inhabit.

As a course correction to an aging series, Soulcalibur VI is unimpeachable. More significantly, as a fighting game with a singular identity, this game could shed its name entirely and impress on its own merits. The game world is enveloping, full of posh art and luxurious conflict that evokes a waltz more than a brawl. The soul, against all odds, still burns.