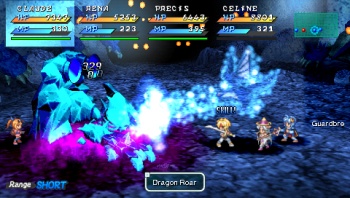 Claude C. Kenny isn’t your typical JRPG hero. He’s not a whiney, big-mouthed man-child, nor is he dripping with mascara-tinged angst. His past holds no great tragedy or triumph. Mid-sized and skinny, his features aren’t exactly fresh from the Marcus Fenix mold, but he’d never get past the bouncers in front of the girls’ locker room, either.

Claude is typical, average – polite, even. To use an old cliché, he’s just like you or me. Unfortunately, he’s also just like a good majority of his multi-chromatically-coifed in-game companions. That is to say, he’s boring. Plain and simple.

So when good ol’ boy normal gets teleported to a mysterious planet and rescues a blue-haired, pointy-eared damsel from becoming a part of a monster’s balanced breakfast, it’s no surprise that he and his newfound Potential Romantic Interest have a nice dinner. At said romantic interest’s mother’s house.

On that note begins an epic tale that’s equal parts action, adventure and compelling drama. Except that, actually, most of those things don’t drive their horse-drawn pumpkin carriages up to the big ball until after everything else stops being so shiny – so, you know, about half-way into the game. And, of course, Claude and company’s hide-under-the-table-during-a-food-fight method of conflict resolution – which sees many of the game’s seemingly interesting interpersonal conflicts quickly dashed by a simple “I’m sorry” – doesn’t do much to spice up the game’s slow start.

And that’s a shame, because Second Evolution‘s weak, chit-chat-filled opening play does little to showcase its star player: its fluid, diverse battle system. Like the Tales series (and every other game in the Star Ocean line), Second Evolution employs a real-time, fighting game-esque battle system. You directly control a single character (by default, your main character) while the A.I. handles the rest. But that in itself isn’t the game’s greatest asset.

No, that award’s reserved for Second Evolution‘s highly customizable skill system, which allows you to slip skill points into the clanking tin cups of hundreds of skills. Some skills have multiple effects – for instance, “knife,” which both raises characters’ strength stat and forms the basis for cooking. Others act as Sifu to your team’s burgeoning combat abilities, while others still grant any number of strange powers. As a whole, the skill system had me harkening back to Fallout 3‘s personality-packed perk system, which is a very, very good thing.

Aside from that bright spot, however, the rest of Second Evolution looks, tastes and feels just like every other world-saving monster mash ever to come out of Japan. You’ve heard it all before: Traverse an exceedingly green game world, recruit party members (some of whom you can only pick up if you haven’t convinced select others to abandon friends and family for a life of uncertainty), run errands for people too lazy to wipe their own bums, blah, blah, blah, blah.

Are those things necessarily bad? Not really; Second Evolution pulls them off in a fairly entertaining fashion, a feat made all the more impressive by the fact that it’s nothing more than a spruced-up port of a 10-year-old PlayStation One game. But seeing a Neanderthal burst free from its ice block and go toe-to-toe with many of today’s heavy-hitters isn’t exactly comforting. In my eyes, it raises the question: How far have JRPGs really come over the past decade? And will they continue to thrive without breaking any new ground? Draw your own conclusions.

In the meantime, though, know this: Star Ocean: Second Evolution is an enjoyable, if inconsistent JRPG that’s definitely worth a look if your PSP has gone far too long without having its dongle toggled. Will it change your outlook on videogames, buy you a free ice cream cone and make the cute girl from Geography class ask you out? Of course not. But you could do a lot worse.

Bottom Line: While an unexciting cast of characters and slow first half keep Star Ocean: Second Evolution from a place in the history books alongside Final Fantasy VII and Chrono Trigger, it’s definitely still worth a look.

Recommendation: Rent it. Or, if you haven’t taken the time to appreciate more recent JRPGs like Persona 4 and The World Ends With You, don’t bother. After all, Second Evolution has been waiting for ten years; it can wait a little longer.

Nathan Grayson actually hasn’t played Persona 4 yet. He aims to rectify that … after he beats Persona 3.