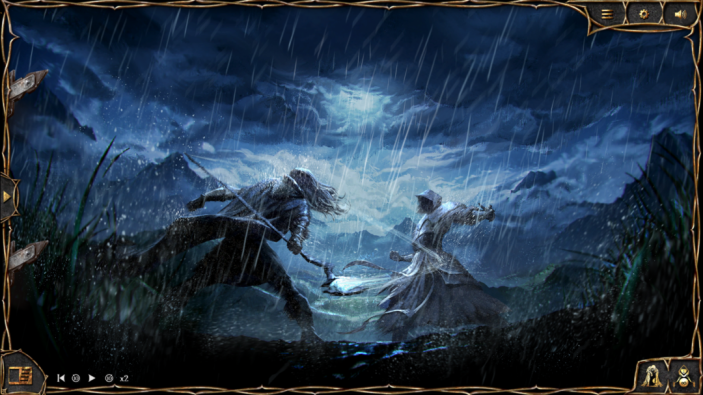 Immanuel Kant would have loved roleplaying games. Their stories about people driven to complete some quest out of a sense of duty, destiny, or moral responsibility would have deeply resonated with the 18th century German philosopher’s views. He’d also love the regimented morality systems games provide to tell players how best to walk their clearly delineated path.

In contrast, Curtel Games’ The Ballad Singer hews closer to the views of the French philosopher Jean-Paul Sartre. The visual novel RPG starts the same was as more familiar ones, letting you choose a character based on the morality and combat style you prefer, and setting them on a path based on their backstory. But then the game presents you with Sartre’s philosophy of radical freedom, repeatedly offering each character the chance to do something entirely different with their lives.

It’s a startling experience to be faced with that level of choice and have it not be a trap. Most games that claim to offer players choice still keep them bound to the same plot, just letting them express their freedom by deciding who to rob, kill, or have sex with along the way. If they did anything else there wouldn’t be a game to play or a story to tell. But in The Ballad Singer sticking to the obvious, dutiful path often won’t result in the best ending for the character. Making dramatic decisions, on the other hand, can lead them to unexpected happiness. Choosing to change your path is just the beginning of a different story.

The game lets you take on the role of one of four characters with their own starting goals and allegiances. The wizard Leon wants to conquer the world. Heroic bard Daragast, the eponymous ballad singer, seeks to unite the Resistance against his corrupt former pupil. The elf assassin Ancalimo serves Leon, the sylph ranger Ancoran helps Daragast. Their stories progress in the form of a choose your own adventure novel that you can read or have narrated through some well-acted voicework that’s distinct for each character. The latter option also helps you ignore the typos that riddle the game’s text while admiring the dramatic artwork that sets the scene.

Many of the choices will be familiar to RPG veterans. Should Daragast sleep with Ancoran? How should Leon use his time preparing for a coming conflict? These chestnuts feel like perfunctory afterthoughts, their reasoning often clumsily explained or having little resonance. But others are more impactful. When Daragast goes on a recruitment drive for the Resistance by rounding up his old buddies, each one offers him a chance at a different path. My first playthrough with the character I turned them all down. Daragast had his climactic battle with Leon but his victory was hollow. He wound up throwing himself off the castle walls in despair. My second time around I had him leave those responsibilities behind to go hang out with a fellow bard. Together they fought off brigands terrorizing a town, got into a musical contest brought to life by in game songs, and then set off for an exciting life of exploration on the high seas. When Leon sent Ancolimo out to recruit mercenaries for his army, I had him join them instead. When he sent the assassin to look for a lost magical blade, he was seduced by his source of information and after several adventures and epic fights the two settled down and adopted a child together.

The exciting variety of these options made the times where my choices had no clear difference extremely disappointing by contrast. In one playthrough of Leon I decided to abandon my plans of conquest to try to gain immortality through blood magic. After ritually murdering a horse and eating its heart, I wound up trapped in a dream where I had to dismember an abomination through solving riddles. Failure meant death. Depending on what difficulty you’re playing on, you’re given limited lives and save points you can use to go back and make different decisions without starting the game over. But when I woke up, I went right back to military strategy. My blood magic never came up again. Maybe some other decisions were missing to have changed things properly, but I felt cheated. Even more jarring were moments when an outcome referenced something I hadn’t done like Ancolimo lighting a fire using materials from an herbalist I never visited in that playthrough. When choice is the defining feature of your game, you should be sure that each one paths properly.

Beyond the bigger decisions, choice threads are used to deal with the game’s challenges. Fights come down to deciding the best tactic and can sometimes be avoided entirely through solving puzzles and riddles. Players are rewarded for taking note of small details within any given playthrough and across sessions. When playing as Ancoran I succeeded in one challenge by remembering the names of a bunch of wizards I’d killed as part of her quest for vengeance against the mage that experimented on her as a child. Failing a riddle often just results in you having to survive a particularly brutal fight. It’s hard to blind guess your way through the game, but you’re rewarded for thinking like the character, which can mean favoring a bold approach for Daragast or taking underhanded actions as Ancalimo.

The Ballad Singer sometimes suffers from crude narrative and leans a little too hard on grimdark sensibilities with regular references to rape and child murder. It’s also annoying that you have to play through the prologue every time even though the decision you make there have no bearing on the rest of the game. But for all its flaws, The Ballad Singer is deeply empowering in its philosophy that no one’s path is predetermined and that you always have the ability to walk away and do something else. I gave up on glory, I betrayed friends, I turned my back on vengeance. I died by the sword, drowned, burned, and was devoured by monsters. I found love and peace and new adventure. It wasn’t a perfect journey, but it was a radical one.

This game was reviewed on PC using a code provided by the publisher.