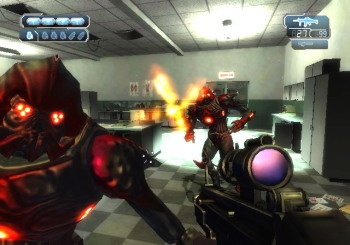 Unlike PC gamers and the rest of the console gaming community, Wii purists have been starving for high-quality first-person shooters. They’ve suffered through Red Steel, a glut of tired WWII-themed shooters and a few other major disappointments in their quest for blissful headshot salvation. After years of roaming listlessly through the parched desert of FPS mediocrity, a game like The Conduit offers a certain measure of relief. Yes, if you’re thirsty enough, even stale, gritty canteen water can taste like Evian.

High Voltage Games’ ambitious effort to produce a top-notch shooter on the Wii is commendable. The developer’s sexy Quantum 3 engine definitely squeezes some flashy visual effects and an impressively high level of performance out of the console. And while it doesn’t pack quite the same razzle-dazzle as bleeding-edge shooters for the PC, Xbox 360 and PS3, The Conduit does give Nintendo fans – at least the ones that are sick of playing Wii Sports and Mario Party – something to finally get excited about. That said, the game’s most glorious moments are muddied by dull, uninspired design and intermittent glitchiness.

The conspiracy-laden plot revolves around mysterious alien attacks and a strange virus that wreaks havoc on the streets of Washington, D.C. With a lunatic scientist running amok, insect-like aliens terrorizing the ruined cityscape and a shadow government called the Trust trying to put a lid on the situation, much of the game’s story feels ripped straight out of The X-Files. You play as a recent Trust inductee named Mr. Ford, who dives into the chaos to shoot things up while seeking to unravel the complex secrets surrounding the virus and E.T. invasion. Despite the appreciable sci-fi nods, the story is less exciting than it sounds, and the gameplay doesn’t fare much better.

Running around subterranean tunnels and blasting your way through ruined government installations starts off on the right foot, thanks to a generally precise and fully customizable control scheme. This is one of several areas the High Voltage team really nailed. Targeting, moving and aiming are all very fluid and natural feeling. Any controls you don’t find agreeable – like the decision to make shaking the Nunchuk with even the teensiest bit of motion the default maneuver for lobbing explosives – can easily be re-mapped to almost any button. However, good controls don’t make up for the repetition and dullness that sets in early in the main campaign. 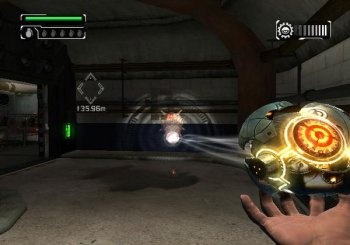 Though you’ll travel through quite a few different locales, many of the level environments have a similar look and vibe to them. The feelings of déjà vu this creates crops up in other aspects of The Conduit‘s design. With the exception of the creepy and organic-looking alien tech you encounter, the dozen or so weapons are all too similar in appearance and function. It’s hard to tell them apart at a quick glance and determine which ones are more effective. The human and alien opponents you face pose a similar problem. There’s nothing particularly interesting about the generic soldiers you gun down, and while alien adversaries come in a few additional flavors – everything from humanoid infantry and flying gnats to rolling ankle-biters that blow up in your face – they’re typically unremarkable until they increase in size and viciousness toward the end of the game. Even so, it’s hard to shake the feeling you’re just killing the same stuff over and over again. This is probably because you will be: Enemies respawn incessantly from conduit portals and icky sacks that must be destroyed to stem the tide of unpleasant creatures.

The addition of the All-Seeing Eye, a neat robo-orb that fits in the palm of your hand, provides regular opportunities to break from shooting everything in sight. This high-tech device can be used to uncover hidden secrets, locate and disarm invisible mines, unlock doors and hack into computers. It conveniently blips whenever it smells something secret-like lurking nearby and lends a puzzle element to the game that is pretty satisfying. If anything, it complements the action and rounds out your other less-talk-more-rock agent duties nicely.

Many of the solo campaign’s failings are made up for in The Conduit‘s truly memorable multiplayer component. Hopping in and out of quick frag-and-run online matches with up to 12 players is speedy and refreshingly hassle-free. There are quite a few multiplayer game modes and arenas to play around in, and the frenetic and fun matches are highly addictive. Support for voice chat via Wii Speak is also a plus, if you actually have the newfangled thing.

Setting my jaded gamer bitching aside for a moment, anyone who hasn’t already had the luxury of diving into the scores of superior FPS games available on PC and other higher-powered gaming systems will be able to appreciate and enjoy what the The Conduit brings to the Wii on several levels. For the rest of you, this unflinching assessment may not be harsh enough.

Recommendation: It’s worth a buy for Wii owners with no other FPS gaming options. Everyone else won’t regret taking a pass.

Nathan Meunier wanted to love popping alien heads open with high-powered virtual weaponry on the Wii. You can read more of his work at http://nathanmeunier.wordpress.com.