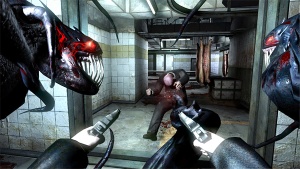 When Sweden-based Starbreeze Studios released Chronicles of Riddick: Escape From Butcher Bay for the Xbox in 2004, gamers were pleasantly surprised. More than just an impressive game in its own right, it was a competent, imaginative companion to an established movie franchise. In fact, it put its poorly-received cinematic tie-in to shame.

Three years later, the team behind Escape From Butcher Bay returns with a first-person action title for the Xbox 360 and PlayStation 3, similarly based on an established license. This time their inspiration is drawn not from the big screen but from the pages of Top Cow’s comic series The Darkness. And once again, Starbreeze does not disappoint. The Darkness isn’t by any means perfect, but it certainly helps cement its creators’ reputation.

The Darkness‘ protagonist is Jackie Estacado, the premier young gun for New York’s Franchetti crime family. Jackie is part mafia stereotype, part edgy urban hipster. Think Sonny Corleone in a Trent Reznor package. Problem is, Jackie’s inadvertently run afoul of his Uncle Paulie, one of the family’s most brutal under bosses. Now he’s got a price on his head.

It’s typical mafia fiction, except for one major wrinkle: On his 21st birthday, Jackie becomes host to a sentient, parasitic power called the Darkness. Manifesting itself as a disembodied voice and a tangle of dark, menacing tentacles that sprout from Jackiy’s torso, the Darkness’ origin is mysterious. It makes its makes its wishes clear, though: It wants Jackie to kill. And given that the city is crawling with his Uncle Paulie’s goons, Jackie gets plenty of opportunities to do so.

The Darkness proves a useful ally, initially granting Jackie with several novel abilities. In Darkness form, Jackie has a pair of razor-toothed tentacles that curl over his shoulders to share his view. He can transfer his consciousness into one of the tentacles and send it slithering across the ground, over walls and through air ducts to unlock doors and tear off enemies’ faces. He can also summon nasty, imp-like creatures called Darklings that will cheerfully kill any nearby humans, then mischievously taunt and abuse their corpses. The Darkness further aids Jackie by partially absorbing gunfire and other damage. 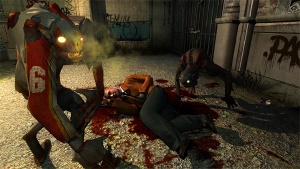 Jackie’s murky new companion gains strength by devouring the corrupt hearts of his enemies, viciously plucking them right from their chests. As its feeds, it endows Jackie with new powers, including the ability to summon up to four unique Darkling variants. While equally homicidal, each Darkling excels in a particular area. The Kamikaze, for example, detonates itself near enemies, and the Gunner cuts loose with a huge Gatling gun. Jackie also learns to conjure up a huge tentacle that can impale enemies and lift huge objects. Toward the end of the game, he can even create whirling black holes that will entrap and destroy all nearby humans and objects.

There’s only one catch: As its name implies, the Darkness only has power in dimly lit areas. If Jackie ventures into the light, the Darkness will retreat into his body, leaving him underpowered and vulnerable. As a result, Jackie spends a lot of time destroying light sources and fighting in the shadows. The Darkness feels like a stealth game at times, but make no mistake: Jackie’s no Sam Fisher. He doesn’t hide in the dark. He revels in it.

As a shooter, The Darkness is merely average, owing to its unimpressive enemy AI, run-of-the-mill weapons and unrefined gunplay. The novelty and flexibility of Jackie’s supernatural powers makes up for these shortcomings, however. Most scenarios offer the player a wide array of options, diminishing the need for conventional weapons. Why burst into a room with guns blazing when you can terrify your enemies by sending in a slithering, face-eating tentacle instead? 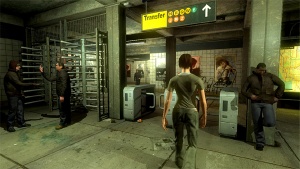 The tiny slice of nocturnal New York that The Darkness depicts is freely explorable, although its story is almost entirely linear. It can probably be completed by most players in about 12 hours, depending on whether they choose to pursue a handful of non-essential side missions. Despite it’s short length, The Darkness is as densely packed with memorable characters and story events as any next-gen action game. Its dialogue bristles with the authentic rhythm and menacing intensity of the best crime fiction, and the voice actors are all at the top of their game. Even the guttural voice of the Darkness is authentically creepy. And Starbreeze hasn’t pulled any punches in terms of mature content, juxtaposing moments of tenderness and humor with unflinchingly brutal language and violence.

The Darkness includes countless clever, cool touches. The in-game televisions broadcast full-length vintage films, including To Kill a Mockingbird and Flash Gordon. Load times between levels are accompanied by dreamlike vignettes in which Jackie broods over his predicament or obsesses over firearms, while those that follow his death feature nightmarish visions narrated by the Darkness itself. Throughout the game, Jackie can collect and discover numbers that, when dialed at a nearby telephone, connect to dozens of curious characters and voice messages. Each number unlocks a bit of concept art or other media, including the entire original series of The Darkness comics. Jackie can also find humorous costumes for the Berserker Darkling, which specializes in melee kills, at several locations in the game. Seeing your Berserker suddenly outfitted in construction worker gear is particularly amusing, especially when you realize that it won’t hesitate to gleefully put its newly found jackhammer to use.

The various aspects of the Darkness are terrifically realized and add a ton of atmosphere and appeal to the game. The beautifully animated tentacles that curl into Jackie’s view are a perfect example. They snap and snarl at his enemies, fight over the hearts that they rip from victims’ chests and sometimes even turn toward Jackie to grin slyly. Their luminous eyes and tattoo-like markings look cool, but also smartly function as visual indicators of Jackie’s currently selected ability and total power. 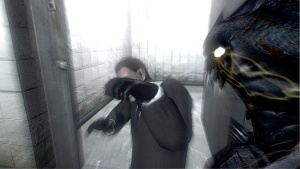 Unfortunately, there’s a long list of distractions and annoyances to contend with. For every sharply rendered and animated character, there’s one that looks creepy, robotic or even disfigured. Most of the game’s non-essential characters, including those that mill about its subway stations, have all the charisma and intelligence of cattle. The Darklings are difficult to direct and typically unreliable. It’s occasionally hard to locate the next objective, and the plot often stutters, especially as Jackie begins to explore the origins of the Darkness. Plus, the tacked-on multiplayer game is uninspired and nearly unplayable due to apparent latency issues.

Few of these imperfections really detract from the undeniable appeal of The Darkness‘ single-player game, though. In most cases, what it lacks in polish and length it makes up for in novelty and style, especially in terms of its dialogue and voice acting. While flawed, it still marks Starbreeze as one of the medium’s most intriguing and creative developers. It also further establishes the studio as one of very few with the skill and determination to successfully build a unique gaming experience from an existing property. Perhaps there’s hope for licensed games yet.