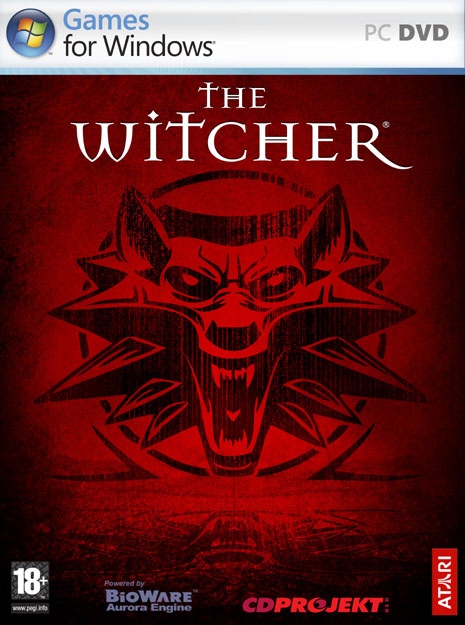 At the heart of The Witcher‘s design lies a rich and compelling roleplaying experience. Unfortunately, the rest of the game serves mostly to obscure this fact. As a storyteller with nearly 20 years of tabletop roleplaying experience, I tend to take my computer RPGs with more than a few grains of salt. I stuck with Gothic, despite its awkward control system and uneven vocal performances. I grimaced through Ultima VII‘s tongue-in-cheek, Olde English dialog. I spent countless hours wandering the wastelands in Fallout, despite my antipathy for turn-based combat. I even slogged through all of Neverwinter Nights and its follow up modules – more than once. Still, after spending well over 10 hours with The Witcher, I can’t see myself returning to it.

The Witcher is based on the best-selling novels written by Polish author Andrzej Sapkowski. You play Geralt, also called the White Wolf. He’s an albino, a mutant, a Witcher, a monster hunter, sword for hire, a sorcerer and an alchemist. Despite having all of his professional bases covered, Geralt died before the events of the game begin, and he’s been brought back to life without his memory, of course. To make matters worse, he’s returned at a bad time – the world is in turmoil and the Witchers are by and large mistrusted. To make matters still worse, the game begins with a powerful sorcerer and feared assassin leading an attack on the Witcher stronghold and stealing their mutagens – secret mystical potions that give the Witchers their power. It’s not a bad start to a game, despite the overly familiar amnesia premise and the obvious parallels between Geralt and Elric, Michael Moorcock’s Eternal Champion.

The marketing for The Witcher proclaims the game to be the pinnacle of storytelling in roleplaying games. Gone is the cliched struggled between good and evil, and moral ambiguity rules the day. It also promises a charismatic, unique protagonist and complex tactical, yet intuitive, combat. So what went wrong?

The story unfolds clumsily via intrusive in-engine cut-scenes, stilted dialog and uneven vocal performances. I understand that a significant amount of the original Polish game’s dialog was cut from the English version, which is undoubtedly responsible for some of the game’s more non sequitur moments, such as this exchange after Geralt learns his first spell at a Circle of Whispering Stones:

Leo: Success?
Geralt: Smash it.
Leo: I knew it would work! 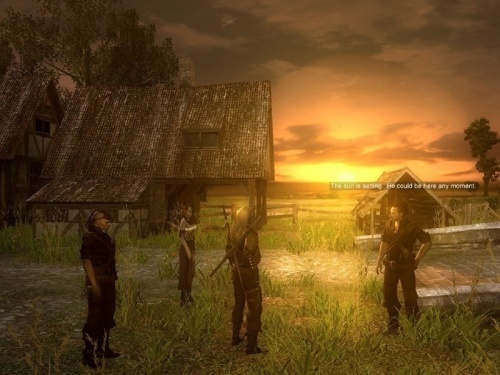 Still, given that the game wrests control from the player to present long and awkward conversations between the characters at inappropriate moments – “Hey hero, let’s stop and talk about my past as we rush to stop the sorcerer from stealing the Witchers’ secrets!” – I can’t help but be a little glad that there’s less dialog than originally intended. I feel that the game should make we want to read the books, not reproduce them for me, word for word.

The voice acting is bad, too. A lot of the actors, Geralt included, opted to take a very minimal approach to their line readings. Along with the cut-scenes, it makes Geralt seem stiff and wooden, more at home in a Thunderbirds episode than the vibrant and unique story-world the designers are trying to present.

Speaking of “vibrant,” The Witcher has some pretty steep system requirements, so be certain your rig is up to snuff if you hope to play. I upgraded to 2 GB of RAM in order to get the levels to load, but that was the only added benefit. Where Bioshock had me gaping at the scenery, The Witcher had me ignoring that Geralt would walk through monster corpses to loot them. Character models frequently had bits of long grass sticking out of their stomach, or two characters would walk through each other in cut-scenes. This is hardly what I was expecting from a game powered by BioWare’s Aurora engine.

Navigating the world isn’t always pleasant, either. Geralt, as shown in the game’s pre-rendered intro, is an athletic and formidable combatant. In game, however, he has trouble navigating around large plants, small ledges, piles of rubble and slight rises in the ground level. I eventually learned to avoid running through grasslands, low hanging branches and small hills, but it was frustrating to need to worry about it. 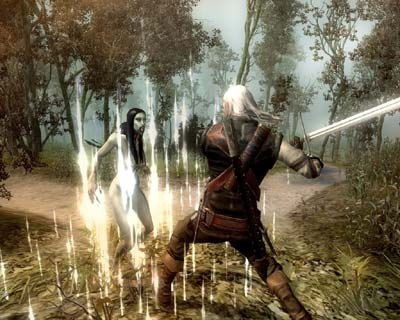 This clumsy, unresponsive control system extends to combat. Geralt has three combat stances: heavy, light and one for a group of opponents. Combat is then initiated by clicking on the enemy you wish to strike. Geralt will maneuver into position and begin to attack, providing you’re not trying to preemptively attack a group of thugs before a cut-scene can to wrest control away from you and allow them all to get into position around you, of course. The primary strategy involved in combat is waiting for a signal from the game that it’s time for Geralt to initiate a new attack and clicking on the baddie again. This results in you picking the appropriate combat stance and then slowly clicking on an enemy in hopes of initiating a flurry of deathblows. Your reward for being able to click when prompted is a lot of splattered blood and the occasional decapitation, hardly what I’d call complex tactical combat.

To add insult to injury, there are rendering issues that negatively affect combat. If the camera is stuck against a surface and Geralt looms too large on the screen, it lessons his opacity. On the hardest difficulty setting, the signal to renew your attack is a change in the coloration of your sword’s visual effects. This means that if you can’t see Geralt, you can’t see your signal to attack. Fortunately, the easier levels of difficulty change the in-game cursor to a flaming sword, so it’s less of an issue.

What remains a problem, however, is when Geralt is surround by enemies, the engine confuses who you’re trying to attack; usually if you try to attack the person in front of Geralt, you actually end up selecting the enemy behind him. So instead of following through on a combo, Geralt will begin to slowly turn to face the new target. Given that each successful attack slows a character down, this becomes a very frustrating problem. Moving the camera up and back helps alleviate the issue, but it still serves to make the combat feel sluggish and unresponsive.

The Witcher didn’t get everything wrong. There’s an elaborate alchemical and herbalism element in the game that requires collecting books in order learn new recipes. Some skills may only be unlocked by performing in-game actions, such as reading the appropriate book or imbibing a mutagen. These elements serve to better integrate character development into the word, rather than isolating them on a menu screen. If this approach had been better explored, it might have helped distract my attention from the game’s many flaws.

The Witcher also breaks from the familiar “good vs. evil” struggle so popular with western RPGs. Instead, every decision Geralt is required to make is firmly in the gray area, often requiring him to choose between the lesser of two perceived evils. Sadly, this moral ambiguity leads me to my final complaint and the game’s ultimate downfall in my eyes. 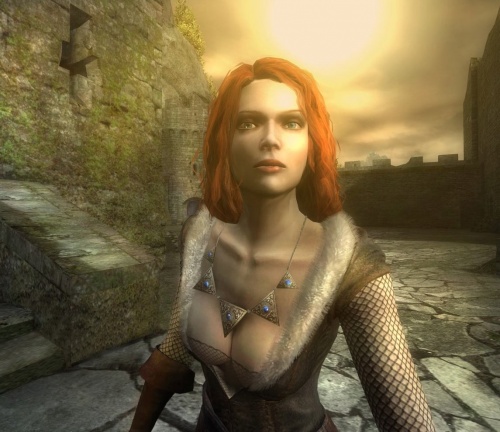 The Witcher presents a typically sexist view of women. Not only are they stereotypically buxom with a tendency to show off cleavage, but they are universally treated reprehensibly by the game’s male characters. The evil men regard them as vile temptresses, witches and whores. The heroes … well, they don’t treat them much better.

Geralt meets three strong female characters early in the game, two of which he has history with, although thanks to his amnesia he doesn’t remember them. When around these woman, Geralt behaves like more like Tex Avery’s amorous cartoon wolf in “Red Hot Riding Hood.” He peppers his dialogue with clumsy innuendo and crude sexual, and your relationship options appear to be “bed them” or “ignore them.” Should you follow the appropriate prompts, a blurry cut-scene takes over, and you’re rewarded with a pin-up card of your conquest. A fourth woman, a waitress, resists your juvenile advances at first, but when you save her from some ruffians and escort her home immediately offers to meet you in a secluded location, asking you to bring the wine.

While I don’t object to sexual content in games, I don’t enjoy the objectification of women. The Witcher sends a pretty clear and unflattering message about the role of women in the world and in the hero’s life. Even certain inventory items bear the description “Can be sold or given as a present to a woman.” Hmm. I guess men don’t get presents in The Witcher. They must have to earn their way, something women clearly can’t do on their own.

Corvus Elrod is a storyteller and game designer who is working on bringing his 16 years experience into the digital realm. He has a habit of taking serious things lightly and frivolous things seriously, a personal quirk which can be witnessed on his blog, Man Bytes Blog.