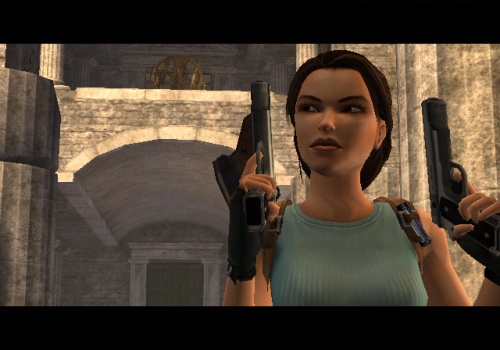 Any gamers out there with functioning powers of perception have probably noticed the game industry is all but choking itself with remakes. The great thing about this, from the business perspective, is they get to make money without having to shake loose any original, and between the new kids they’ll be luring in and the creepy, obsessive fan-base that comes pre-installed, you end up with a mansion made out of cash money.

Tomb Raider: Anniversary for the Wii is a 10-year-old game released today, with a few extra bells and whistles added for good measure. Not that there’s anything wrong with old games, but that’s what the Virtual Console is for.

The controller layout is probably the hardest thing to get right on the Wii, and it definitely shows through here. The camera – far more than the bears, dinosaurs and mutants – is constantly trying to get you killed. You supposedly control the camera by holding down a button on the nunchuck and pointing to and fro with the remote, but it doesn’t feel fluid and the camera seems to point wherever it wants.

And speaking of frustrating controls: The plus button, which I’ve come to associate with “pause” or “menu,” instead uses one of your large med-packs. You will also be randomly instructed to tap up on the D-pad to keep from falling at certain points, which isn’t exactly placed for fast tapping. Thankfully, there are checkpoints every 10 to 15 feet, so all you really lose is your patience and sanity.

Combat is a bit dodgy, as well. Don’t get me wrong, aiming with the remote works fine, but since my natural hand position doesn’t involve constantly aiming at the center of the screen, Lara would frequently begin a battle by firing her first shots into the camera, giving her attackers the precious extra seconds they needed to sink their fangs into her buxom frame. But most of the time there would be a convenient ledge to scurry up, where the critters couldn’t reach her, leaving Lara and the player free to give PETA something to cry about.

The controls aren’t all bad, though. As shoehorned as such things usually feel, I really enjoyed a few of the motion-sensitive morsels, such as how different types of levers need to be pulled in different ways. Others, like vigorously shaking the nunchuck to increase swimming or climbing speed, felt unnecessarily dirty.

As usual with games nowadays, the cut scenes are no longer safe. And as dry as this idea has become, there’s a certain charm present here, as the button-matching has been replaced with motion-miming and I can’t help but be struck with a boyish sense of satisfaction whenever anybody asks me to pretend I’m slinging bullets John Woo style.

The graphics are obviously slicker than the PlayStation original, but the shadows present a problem. Or rather, shadow. I know we all love having our protagonist cast one, but when nothing else does, hers becomes rather eerie, such as when our hot pants-clad heroine is shimmying up a pole in some inexplicably well-lit cavern, and, out of the corner of your eye, you catch her black silhouette crawling up the far wall on nothing in particular. It kind of breaks the mood.

Bottom Line: The Wii version of Tomb Raider: Anniversary is plagued with control and design mishaps. Still, I wouldn’t say it’s a bad game; the original was good, and that still manages to shine through here and there. Plus, there are those few moments of motion-control cleverness, but that’s just not enough to save it from the fact that we’ve seen this already.

Recommendation: Rent it if you harbor a secret Lara Croft crush, but let’s try not to reward incessant, senseless remaking if we can avoid it, shall we?

Thaddeus Stoklasa has a weird name and spends most of his time lost in the vast wastes of the American Midwest. He can’t stand the undead and believes left-handed people are actually robots.