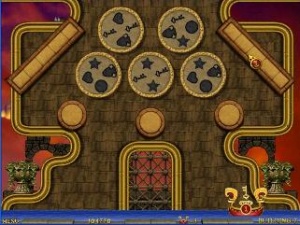 If Bookworm Adventures was Popcap’s magnum opus and Peggle was their Plinko, their newest game, Venice, is their Go. Venice is a seemingly simple game – save Venice by solving puzzles, which involves shooting various treasures at appropriately-shaped holes for points and prestige – that’s also a very Zen experience. To take a wild shot in Venice is to risk losing; after all, you only have a limited number of lives. But taking a wild shot and letting go of your earthly desires to stay alive is also the only way to achieve true Venice enlightenment. See? Zen.

Venice starts slow. Indeed, initially, I was disappointed compared to my first time playing Peggle, which was a magnificent experience of light and sound and flashing lights and explosions that appealed to my inner 8-year-old (as well as the fact that I still am, essentially, 8 years old). All I seemed to be doing was shooting random treasures into the appropriately-matched shape on a spinning wheel or an idle block. Where were the explosions and choral music for accomplishing a simple task? But focus enough, learn discipline and patience, and all the mysteries of the universe will be revealed to you, as I found when Venice moved out of the early stages and into the real meat of the game.

Shooting the treasures and filling in the spots on the spinning wheels or empty blocks isn’t particularly pleasing on its own. However, what you’re actually doing is making the game more interesting, since putting a treasure in the right spot adds an object to the board. Venice uses pinball-style physics, so what was a simple shot in the beginning soon becomes a demented pinball game, banking coins off the wall, off the star, off the bumper, over the block, nothing but net. The soundtrack is soothing rather than operatic – all the better to calculate complicated bank shots in your head as you plot to clear the board.

As with all Popcap games, after drawing you in, it adds more and more to the mix. Bank shots are one thing, but hit it right and you’ll pull off a combo – shoot a coin into the coin slot at just the right time, the wheel will turn, things will spin, it’ll throw off another coin, bam, big points – and get big points for that, and for the trick shot. It’s like the miracle of compounding interest: A 10-point shot can build up to the thousands, with a little finesse and a lot of contemplation. They introduce new elements consistently, new blocks or little objects to hit that seem like simple changes, but wind up being complicated additions to the game. The more you play, the more engrossing it gets, but you’re also making a journey; learning to play the game makes the game more enjoyable, and figuring out how to beat the latest trick they’ve thrown in is an incredibly rewarding experience. The more you play, the more the game reveals itself to you, and the more you want to play. 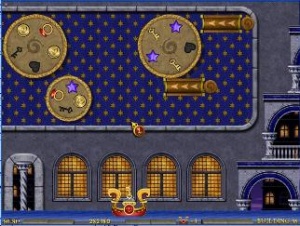 As usual, there are a couple different game modes. There’s the main one, Journey, a level-by-level quest to save Venice. There’s Flood, which is the bizarre twin brother – the one with the goatee – since this one involves firing as frantically as possible as the relentless sea rises beneath you. There’s a Trick Shot mode once you get your shooting skills polished and manage to unlock it, and a Survival Mode, which also requires unlocking. Someone’s been studying their JRPGs. They’ve also made it so Journey mode saves your progress. Is the boss coming? Close the window before you get fired. Did he leave? Open it back up, click a few things, and you’re right back where you were. Not only are they continually making great games to slack off with, they’re optimizing the slacking-off process for maximum efficiency.

To say I enjoyed Venice doesn’t quite do the game justice. It appealed to my essentially nitpicky nature, my refusal to give up until I see how deep the rabbit hole goes. Every time I started to think I had it figured out, it threw something else at me. Whereas once I had embarrassingly well thought out opinions on the relative merits of various Final Fantasy games, now I will gladly sit in a cave on some empty hillside and contemplate the true meaning of Venice and making the perfect shot. I enjoyed Venice my entire life; there was just a time when there was no Venice at all. See? Zen.