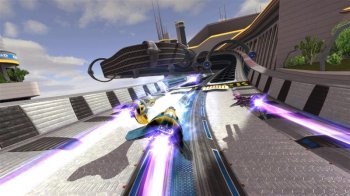 When people think about famous videogame soundtracks, most will immediately come up with world-famous brands such as Mario, Zelda, Final Fantasy (and other Nobuo Uematsu projects), and Halo. Why does no one ever mention the Wipeout series?

Before you answer “because most of it’s licensed,” consider artist CoLD SToRAGE, who created most of the soundtrack for the very first Wipeout game. CoLD SToRAGE’s work from that era sparked an interest in techno and electronic music in me that has yet to wane. And there’s no denying that the licensed soundtracks for the Wipeout series have attracted the best and the brightest from the electronic music scene, cementing the series’ reputation for catering to the club-going, glowstick-wielding crowd.

The tradition continues with Wipeout HD, the latest game in the series and the first to appear on the PlayStation 3 via the PlayStation Network. Surprisingly, Wipeout HD is pretty traditional for the series, harkening back to the days of earlier Wipeout games, especially Wipeout XL. (There’s even an option, once you unlock it, to use a HUD style similar to Wipeout XL‘s.) Gameplay is essentially the same as it has been for the series, refined by the PSP editions Pure and Pulse. You race along anti-gravity tracks at ludicrous speeds, attempting to best your rivals either through speed and finesse or sheer firepower. It’s a devilishly addictive hybrid of Mario Kart and the recent remake of Death Race, a formula that current developers Studio Liverpool knew better than to tinker with.

Studio Liverpool may have stuck to the blueprint a bit too closely, though, as they didn’t feel adventurous enough to create any new tracks for Wipeout HD – all the tracks currently available are recycled from Pure and Pulse (although there are hints of new tracks being made available for download at a later date). This limits the appeal of Wipeout HD somewhat – those who have played the PSP versions to death may find little to drive them on here. This game is best played by either those Wipeout fans who haven’t played Pure and Pulse, or those who just simply can’t get enough Wipeout (like myself).

Despite the recycling of tracks from previous versions, you couldn’t tell they were reused just by looking at them – the graphics of Wipeout HD have been completely overhauled to take advantage of the PS3’s power. Those who say that next-gen graphics are too brown haven’t looked at Wipeout HD yet. The aesthetic is definitely still faithful to the series, having bright neon signs, pulsing textures, glowing engine flares and other seizure-tastic elements. The graphics of Zone Mode are the most seizure-inducing of all, with brightly colored monochromatic textures that change depending on how fast you go and a track that pulses along with the music like an equalizer. As an aside, Zone mode – where you drive a craft that continually goes faster and faster until you inevitably go kersplat against a track wall at a gazillion miles per hour or thereabouts – is still the best thing to happen to the Wipeout series since its inception. (Although it is disappointing that Elimination mode from Pulse – where the sole focus is on killing other racers – didn’t make it.)

What am I missing? Oh, yes, the soundtrack. This is another recycled element from Pulse – all the tracks that show up on Wipeout HD are ported over from Pulse. Thankfully, Pulse‘s soundtrack still holds up, and it’s incredibly easy to import your own soundtrack. The changes to the music that result from certain events – such as the bass suddenly dropping out when you go airborne – are a nice touch as well.

Bottom line: For $20, this is the best racing action game you’ll see on the PS3 … at least until the next Wipeout game comes out on Blu-ray.

Recommendation: Wipeout HD is for anyone who likes ludicrous speeds and weapons on the track, who hasn’t played Wipeout Pure or Pulse for the PSP, or any Wipeout junkie who’s on the series like club drugs.

Phillip Miner is a freelance games writer who would totally watch NASCAR if it was more like Wipeout.