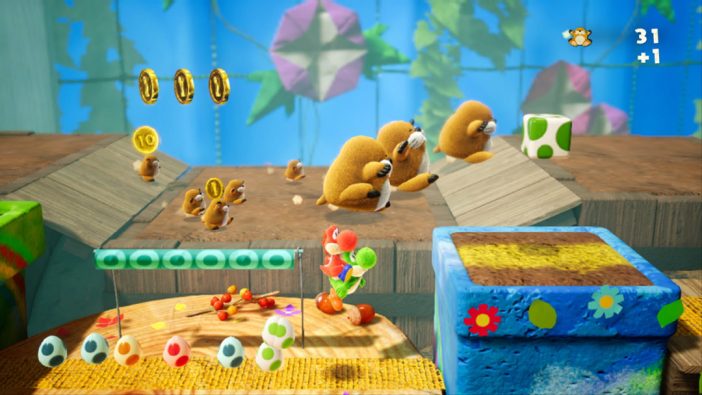 Gameplay isn’t always king. While interactivity makes video games a unique artform, individual titles can lean on more traditional avenues of artistic expression to convey a story and tone. The story and acting carry L.A. Noire and tonal themes propel BioShock to greatness. Yoshi’s Crafted World follows the same model, with the stunning array of visual splendor doing more to make the game worth experiencing than the gameplay alone.

Yoshi’s Crafted World bounces with radiant joy. Every pixel within Nintendo’s newest little platformer is bursting with color and creativity befitting Mario’s lovable sidekick. As Yoshi, who is depicted as a cute LittleBigPlanet-style pincushion, you traverse various arts and crafts-themed levels that look like the elaborate creations of a prodigious kindergarten wunderkind. Houses look like they’re built out of cardboard, cut-outs of planets and moons dangle on strings, and missiles appear as explosive colored pencils. It’s absolutely delightful.

Yoshi’s Crafted World is brimming with character. The objective of the game is to collect six gems so Yoshi can power his flying space boat and return home, but Baby Bowser and his minions get in the way. Baby Bowser is a tyrant who rules the realm with a squeaky gavel, and Yoshi must liberate the land from the tantrum-prone little Koopa by acquiring sun flowers, defeating bosses, and spending hard-earned coins on costumes dispensed by a gumball machine. I played dressed as a cupcake.

The level variety is a wonder to behold. The haunted house, ninja, dinosaur, carnival, and space themed stages display an abundance of ingenious charm that consistently caused me to smile from ear to ear. Yoshi’s Crafted World’s pacing allows the visuals to amuse and surprise throughout Yoshi’s journey and keeps the core gameplay from becoming stale. The designs of the various worlds are unique to each level, and the unique visuals and gameplay kept me hooked.

Yoshi’s Crafted World is at its best when you experience it as a visual spectacle.

The platforming is fun, though not necessarily innovative. Yoshi’s Crafted World is mostly a two dimensional side scroller, but there are areas where the adorable dinosaur pincushion can move up and down the environment. The game’s challenges and puzzles require mastering Yoshi’s maneuverability and navigating the fixed perspective of the camera. Visually, some areas will be purposefully obscured by cardboard clouds and signs in the foreground and background so that Yoshi must chuck eggs to reveal what treasures they’re concealing.

It’s all very simplistic and anyone desiring a more challenging platformer will be disappointed by the lack of difficulty. Yoshi’s Crafted World even has an option to make the game easier by decreasing the amount of damage Yoshi receives, which will be welcome to new players but will likely irritate those who crave a challenge. A hard mode would’ve been a strong addition.

However, the game’s easy going nature mostly works in its favor. Yoshi’s Crafted World is at its best when you experience it as a visual spectacle, marveling at stunning set pieces which involve controlling a giant house-punching Yoshi robot, piloting a wooden plane, and evading hatchet-wielding killer clowns.

Yoshi’s Crafted World only begins to run into problems when the gameplay obfuscates the eye candy. This is most evident when it comes to costume stats. Costumes add a few hit points to your health. This is a problem because it’s incredibly rare that your favorite outfit contains the best stats. I often saw adorable little space-themed costumes I wanted to experiment with, but I avoided them because my cherry pink frosting cupcake costume already allowed me to rain death on Bowser Junior’s armada in style. While two hit points seem miniscule, health regenerates when you reach mid-level checkpoints. The extra HP can be vital when trying to solve some of the more thought-provoking and experimental puzzles.

The repetitive music is another blemish. While the lullaby-esque piano and strings evoke the game’s youthful atmosphere, Yoshi’s Crafted World desperately needs more variety. As the vibrant visuals constantly shift gears, the monotonous score is unable to maintain that same pace, causing the optical and auditory experiences to feel desynchronized at times.

Yoshi’s Crafted World is still a pleasant surprise. I was just expecting a solid little platformer, but I was floored by Yoshi’s Crafted World’s sophisticated imagery, abundant heart, and charmingly fun level design. Whether playing solo or cooperatively, I’m looking forward to exploring more of Yoshi’s Crafted World and diving head first into that colorful trip. The game contains numerous bonus levels, and each level contains a replayable timed trial mode where the stages are played backwards while searching for three missing puppies. (Yes. You read that right).

I expected nothing less.