Travel and accommodations for the event were provided by Wizards of the Coast. 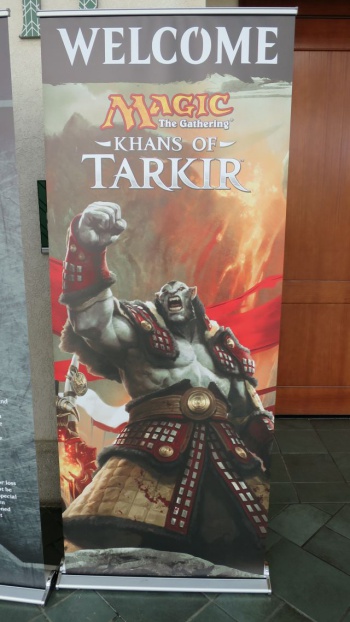 Pro Tour Khans of Tarkir kicked off Friday, October 10 at 9am local time. Three rounds of Draft led into five rounds of Standard Constructed, making for a 10+ hour day for most of the 365 players in attendance, as well as the 25 Judges overseeing the event. Then, of course, there’s the Wizards Coverage Team, which consists of another couple dozen dedicated folks working A/V behind the scenes, chatting it up on camera, and poring over decklists to bring fans some of the most extensive imaginable coverage.

Preparing for a Pro Tour doesn’t just mean making a really good deck. It’s about knowing (or at least having a good idea) what exactly your opponents will be playing, and building with that in mind. I was wandering the tournament area with about 15 minutes left in the first round of Constructed, and everywhere I looked, I saw [mtg_card=Sylvan Caryatid]s and [mtg_card=Courser of Kruphix], and, of course, [mtg_card=Siege Rhino]. Wizards spoke to some pro players about the Rhino, and it boils down to it being a known in the format, where other archetypes remain to be proven. It’s great, no doubt, but it’ll take exactly nobody by surprise, which is often a key element to Pro Tour success.

When the next round started, however, it became apparent that this wasn’t the only major force in the room. Jeskai Aggro actually has a greater showing this weekend, but closes games fast, so the late-round sample I took near the end of the first Constructed round was skewed towards those longer games.

One of the cooler builds I saw was Kung Fu Tokens from Peter Steinaa. It’s another Jeskai deck, but instead of [mtg_card=Mantis Rider]s and burn spells, it’s casting [mtg_card=Hordeling Outburst] and [mtg_card=Triplicate Spirits]. When [mtg_card=Jeskai Ascendancy] hits the board, instead of just developing your board state with tokens, you’re actually buffing your existing army with your token generators, allowing them to swarm over the opponent for a huge chunk of their life total. I’m not sure that it’s the be all end all of Jeskai builds, but it was certainly novel to see something a little out of left field on the professional scene.

One of the highlights of my day was chatting with Brian Kibler after Round Six. Despite being 2-4 for the day, Kibler was a fount of positivity. He didn’t blame variance or luck. He didn’t begrudge his opponents or the fates. He took all the responsibility for a losing record, yet remained absolutely chipper about his shot at day 2. It takes a lot of energy to even sit down for 10 hours of Magic, much less maintain that kind of positive demeanor. That’s the kind of thing that competitive players in all spheres should aspire to, and I have much respect for Kibler’s continually positive attitude.
Day two begins at 9am local time October 11, with three more rounds of draft, and five more rounds of Constructed. Sunday is reserved for the Top-8 competitors, the decklists of which will help to define the Standard Magic meta game for the next few months. Good luck to all players, kudos to all judges, and may the Wizards Coverage Team look forward to some much-deserved rest next week.