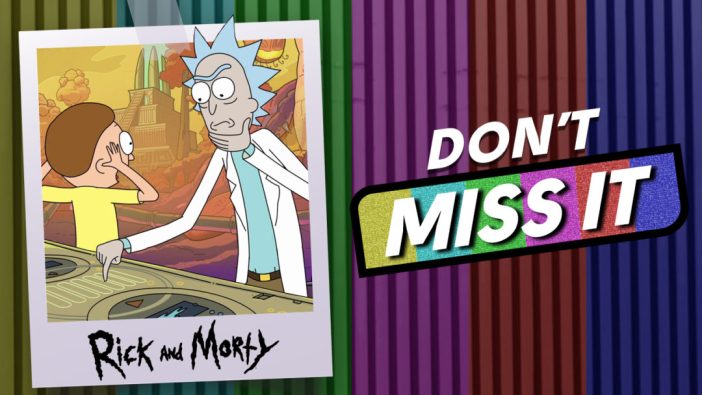 Rick and Morty recently returned for its fourth season.

Like a lot of successful and beloved pop cultural phenomena, it can be hard to separate Rick and Morty from the noise around it. It is entirely possible that people might only have heard of the series through the controversies generated by the more extreme elements of its fandom – like the debacle surrounding a McDonald’s promotion or the harassment of its female writers.

This is a shame because Rick and Morty is worthy of celebration on its own terms. The premise of the show is a disarmingly simple riff on the familiar framework of beloved properties like Back to the Future or Doctor Who: Rick Sanchez (Justin Roiland) is a brilliant and nihilistic inventor who embarks on a series of adventures with his grandson Morty Smith (also Roiland).

As one might expect from an animated television series co-created by Dan Harmon (Community), Rick and Morty is impressively pop culturally literate. In some ways, it feels like the perfect television series for the internet age; like Steven Moffat’s Doctor Who or Sam Esmail’s Mr. Robot, it is designed for viewers with an understanding of how these kinds of stories work so it might play with them.

Episodes draw on inspirations as ubiquitous as Jurassic Park (“Anatomy Park”) and as niche as Zardoz (“Raising Gazorpazorp”), including nods to directors like David Cronenberg (“Rick Potion No. 9”) and even casting Werner Herzog (“Interdimensional Cable 2”). Even the interdimensional “Council of Ricks” seems to have been drawn from writer Jonathan Hickman’s Fantastic Four run.

While it might be possible to position Rick and Morty close to the “riff on pop culture” template of Seth MacFarlane projects like Family Guy or American Dad, it is attempting something slightly more nuanced and intriguing. It takes familiar genre elements and then twists them in a variety of interesting ways to play with underlying assumptions. A large part of the appeal of Rick and Morty comes from its application of a cynical view of human nature to these familiar genre templates. Over the course of the show’s first three seasons, Rick and Morty develops its two leads from the familiar archetypes suggested by the premise through subtle but committed character work amid high-concept comedy.

Rick’s cynicism and nihilism is portrayed as toxic and damaging to both himself and the people around him, with the show repeatedly emphasizing how empty and hollow his worldview truly is. This is perhaps most explicitly articulated in the third season standout episode “Pickle Rick,” which paired the mimetic joke of the title with an insightful family therapy session.

Simultaneously, Morty finds himself increasingly traumatized by these weird episodic adventures, as each madcap journey inevitably culminates in an absurdist high-stakes drama requiring a horrific resolution. Over the show’s three seasons, Morty has suffered a tremendous amount. While the show has a loosely episodic format, it never loses sight of the cumulative nature of that trauma.

With its title characters, Rick and Morty isn’t just playing with genre archetypes, but exploring them. Rick is a deconstruction of the jaded genius archetype, while Morty is a humanized peril monkey sidekick. A lot of the comedy – and a surprising amount of insightful, humanist pathos – arises from the juxtaposition of that character work with ridiculous science-fiction plot elements.

Of course, it helps that Rick and Morty is consistently funny. Over its 30+ episodes, the series has developed its own rhythm and language. It has developed an impressive supporting cast and a reliable catalogue of recurring jokes. More than that, like the best television series, it has found a niche that makes it unique in the television landscape.

This gets at the beauty of Rick and Morty. There is nothing else on television like Rick and Morty, even if the show’s strength comes from its unique approach to tried-and-tested genre elements. The show consistently uses familiar elements in new and interesting ways, pushing them in strange directions to fascinating effect.

It’s good to have it back.

The fourth season of Rick and Morty is currently airing on Adult Swim on Sundays at 11:30 p.m. ET. Previous seasons are available to stream on Hulu in the United States and on Netflix internationally.