I think the major problem with Rise of the Tomb Raider is one of cognitive dissonance. Even before it came out I wondered what the point was when I’d assumed its predecessor had tackled the origin story, and if there was any rising to be done, it would’ve been in that. You started the game as a fragile little girly wirl (well, the kind of fragile little girly wirl that is an expert archer and outdoorswoman but the point is she did have to hesitate about eight nanoseconds before she could comfortably murder legions of her fellow man), and by the end of it she’s a hardened adventurer.

To then imply, in the very title of the sequel, that there’s still a bit of rising that needs doing before she’s fully topped off as the big tough Tomb Raider we know and masturbated over all through our teens, not only seems like kind of a wishy-washy brief for the game to give itself, but also rather undermines the arc Lara went through in the last game. Oh well, she was almost completely battle hardened by the end of all that, but I dunno, maybe it’s not too late to give that philosophy degree one more chance. 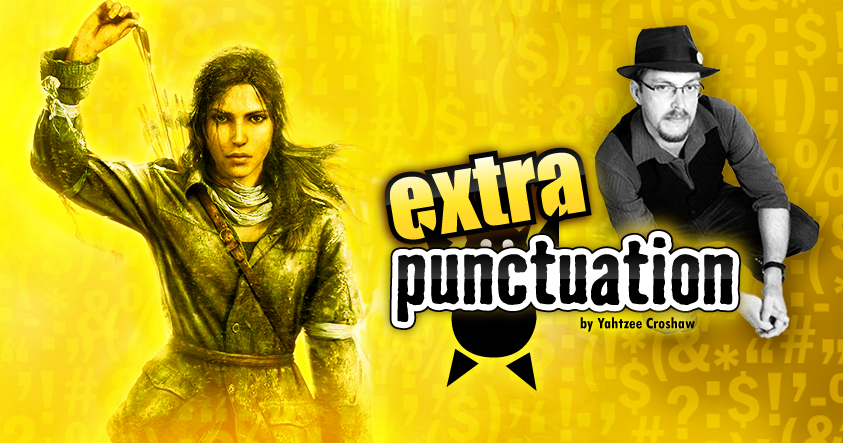 Look at a superhero movie trilogy – very rarely does the origin story spill over to the second instalment. No, at that point you want all the growing to be over and to see the cool character at their peak facing challenges bigger than they’ve ever faced before, optionally ending at a low point for the sake of a third film. See: Nolan’s Batman. If Lara’s not her big bouncy larger-than-life confident adventuring self by the second one then I’m wondering how much this series is going to continue dragging its feet. 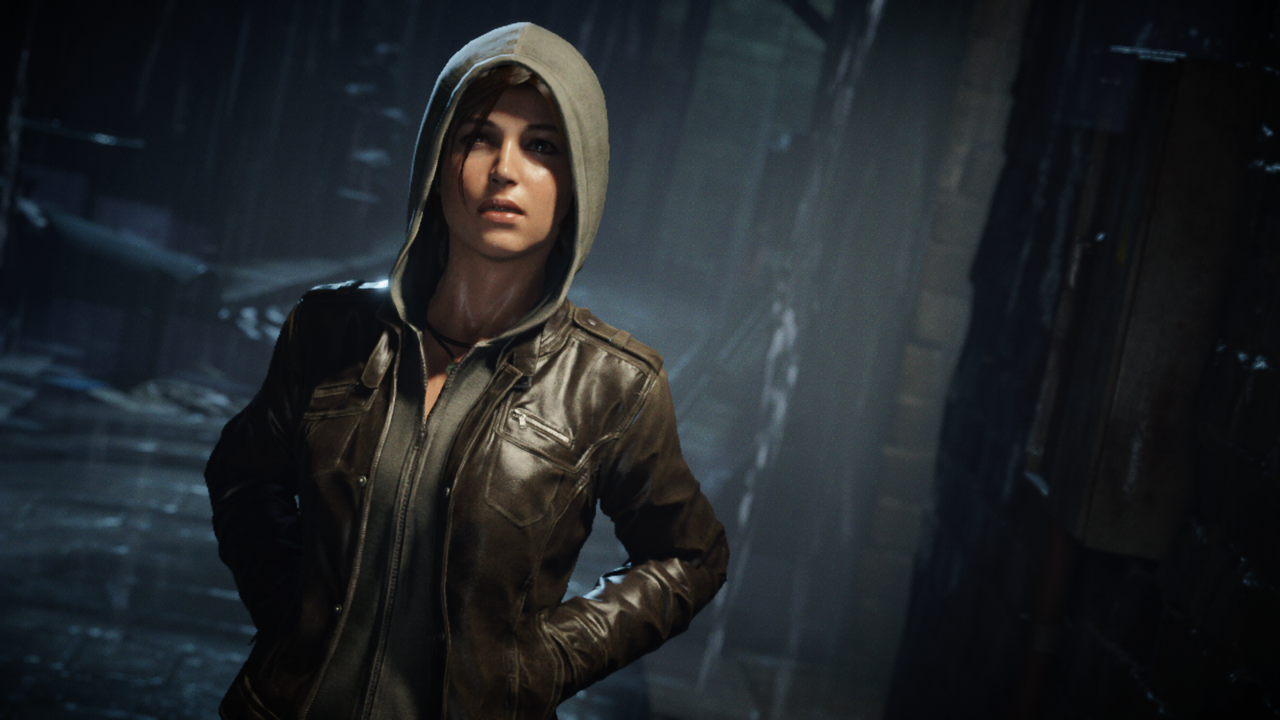 But about that cognitive dissonance. You can see, in Rise of the Tomb Raider (Urgh, I almost typed Rise of the Robots there, how’s that for a stroll down shit games memory lane), a certain effort being employed to paint Lara as the experienced adventurer now, as she trots the globe searching for the thing that her dad was searching for in a thoroughly Indiana Jonesy kind of way. Fair play to her, she is actually doing the adventuring and survival thing out of personal drive rather than, as was the case in the last game, because the universe has randomly decided to do a squirty dump on her.

The thing is, while the game attempts to say a lot about Lara by her circumstances and the things around her, all of that is being constantly refuted by the way Lara acts in person. Yeah, she’s technically going on adventures of her own free will, but she herself doesn’t seem to think so, mouthing off constantly about how this is something she’s ‘GOT to DO’. That’s the classic cheap-ass writer trick for avoiding having to think of proper logic or motivation. Like that bit in Star Trek Nemesis where Picard insists on beaming over to fight the main villain alone, arguing that it’s something he ‘has to do’. Erm, no you don’t. That’s why you’re the captain. You delegate. Beam the security team over, or perhaps just Riker in a futuristic armoured girdle to hold his gut in.

I was noticing this discrepancy from the very start of the game. In the prologue, Lara insists on pushing ahead to tackle a snowy mountain against the suggestion of her guides. So I’d take that as establishing her as bold, unafraid of danger, even smart enough to have done her own calculations and figured it was worth the risk. However, as what I laughingly call ‘gameplay’ begins and we are invited to steer her up a hill for thirty seconds before the next preanimated set piece, she immediately wraps her arms around herself and shivers pathetically as her sidekick continues ahead with total confidence. And this sets the tone – Lara constantly pants and shivers, doesn’t take a nasty fall without rolling around clutching herself and whining for a bit, and never comes out of a swimming section without having to cough her lungs up for about five minutes. 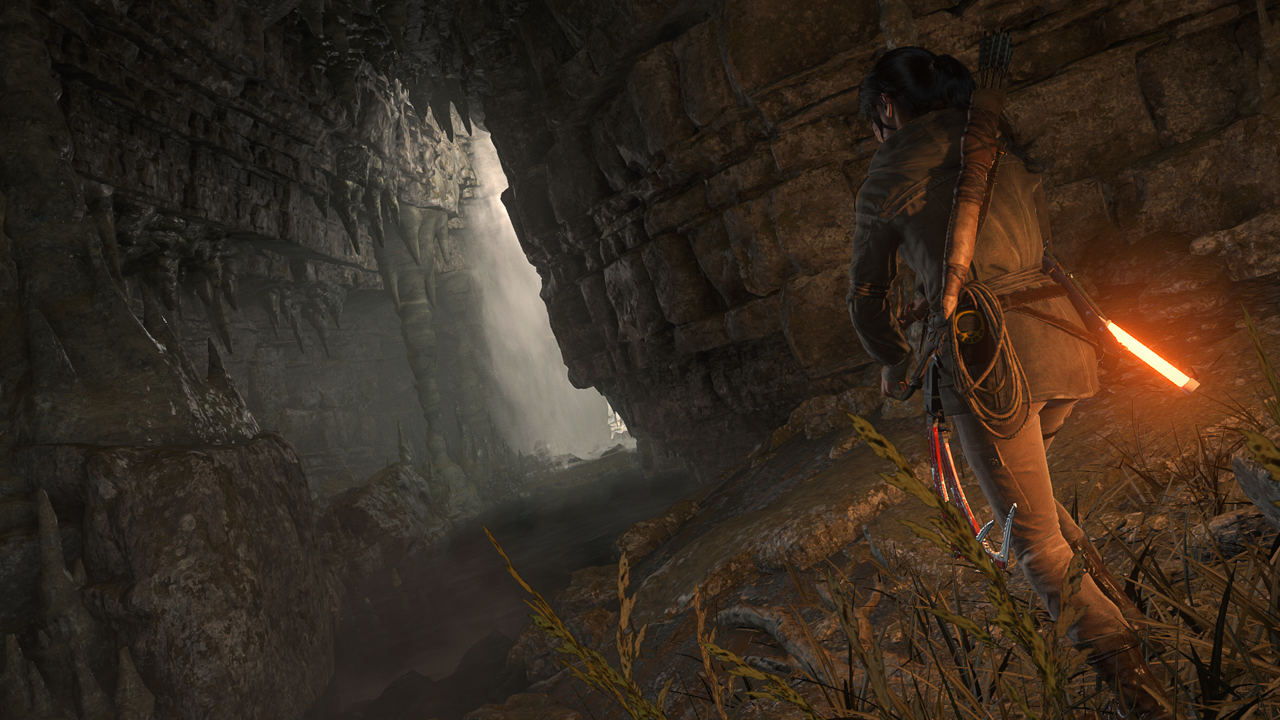 Now, I’ve never taken a gender studies course, obviously, so I’m not about to start making rash statements that old Lara Croft was a more feminist character than the new one. She didn’t really have much of a character at all. (That was kind of the point.) Maybe you could argue that she was a psychopath who massacred wildlife and humans for the sake of gaining trinkets to add to the hoard underneath her house, but at least she was seizing the day. At least she knew exactly what she was doing, and that she did it for her own gratification and self-interest, not because she was helpless to stop herself.

It’s not particularly realistic to be able to do nineteen backflips in a row without getting tired out or complaining, but the new Tomb Raiders take it too far in the opposite direction. And it’s not like they’re any more realistic, with Lara being able to survive without lasting scars or severe recurring medical issues, so when she persists in pulling the pained and whinging act after the ten squillionth hit, the impact has been devalued severely.

Maybe old Lara Croft wasn’t as complex a character, but maybe uncomplicated is the right way to depict the main character of an escapist adventure fantasy like what the Tomb Raiders were. We’re naturally more interested in the world, the architecture and the quest for hidden treasures than we are in our viewpoint character and how much her splintered ribcage hurts.

In the world of triple-A development it’s virtually pointless to pick on individuals, since one person’s impact is easily lost in the mincing machine of the modern entertainment industry, but I feel it would be remiss of me not to acknowledge that I’ve found the writing to be comparably lacklustre in Mirror’s Edge, Thief 4 and both the new Tomb Raiders, and all of those games had the same lead writer: Rhianna Pratchett. It’s at the point that I can recognise her signature style even before I’ve looked up the credits to check. The dialogue’s perfectly functional in getting the events of the story across, but I’m always left unengaged because the main characters tend to lack charisma and personal agency. Now that I’ve mentioned a woman working in video games, feel free to turn the comment section into the inevitable kneejerk gender politics debate and get yourselves banned.