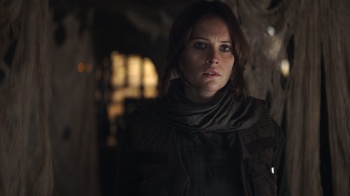 Lucasfilm president Kathleen Kennedy says that no matter how well Rogue One performs, it will not get a sequel.

Rogue One, the upcoming Star Wars spin off starring Felicity Jones, will not be getting a sequel no matter how well it performs, stresses Lucasfilm president Kathleen Kennedy.

Kennedy made it clear in the latest issue of Empire magazine that the film will strictly be stand-alone, and the studio has no plans for a follow up. Lucasfilm chief creative officer John Knoll and director Gareth Edwards echoed her sentiment, with Edwards going so far to say that Rogue One already has a sequel: 1977’s Star Wars: A New Hope.

So, for those of you worried that each of these Star Wars spin offs was going to spin off into a full trilogy, fret not.

For the uninitiated, Rogue One tells the story of the daring rebel spies who stole the plans to the Empire’s infamous Death Star, setting the events of A New Hope into motion.

Rogue One: A Star Wars Story opens in theaters on December 16.