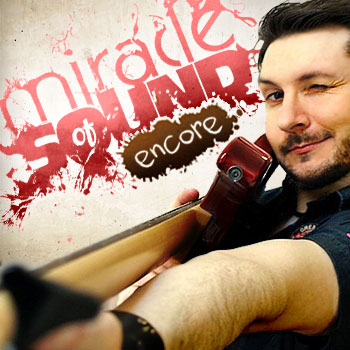 It’s been a great month. The first ever Escapist Expo was a roaring success and tons of fun for everyone who came. The staff worked their butts off but it was worth it judging by the many smiling, happy faces we saw over the weekend.

During my gig (which by the way was so much fun – thank you guys for being awesome and singing along and dancing, you made my year) I mentioned how The Escapist community can sometimes get a rep for being snarky, cynical meanies due to the forums. But meeting all of you in person gave a completely different picture. We have a really lovely, gentle, friendly community here, away from the anonymous snideness of the web. It really was a pleasure to meet so many of you, chat to you, hear your stories and your passions, your favorite games, your favorite Miracle Of Sound songs and much more. I look forward to seeing you all again next year!

Apart from meeting all of you, we had a few other little personal highlights of the weekend:

Meeting Susan and all The Escapist staff (and getting drunk in their office then going all emo when I found Justin’s desk where the Miracle Of Sound videos are made).

Talking to Bob and realizing just how unbelievably knowledgeable he is about movies and games.

Getting my SNMG 1&2 Deployment 2012 Proud Defenders army t-shirt from a fan in the military who sadly I didn’t have time to talk to for long. If you’re reading this, hit me up on twitter!

Meeting Stacey from Epic Games, who was the first person to Tweet out one of my songs. It was nice to be able to say thank you in person!

If you could play any venue in the world, where would you play?

Whatever’s left after Rachel had hers.

How do you feel about Annette leaving Nightwish?

A bit sad. She has a lovely voice.

Will you ever make Miracle Of Sound posters? I want one.

We’ll definitely look into that this year. T-shirts, too!

Do you have a song that you’ve been sitting on for a while because you don’t feel it’s quite “ready”?

Always. I actually currently have one that has been finished for a while and we are waiting until a certain thing returns to release it. I am such a tease.

Is there something you would like to do with your music, but you can’t due to your own technical limitations/playing abilities?

Guitar/piano solos. I suck at them. I have no natural dexterity no matter how much I practice, as anyone who has played Call of Duty with me can tell you.

Transformers is something very personal for me that goes a little deeper than most of the nerdy things I love. When I was a little kid, I wasn’t very sociable. My parents split when I was 6 and due to my birth mother being very publicly gay in a very backwards 1980s Ireland, none of the other kids in school were allowed to hang out with me in case they contracted the devil’s horrors off me (apart from my oldest friend Kate who thankfully had open minded parents).

My father’s day job (he was also a well known published poet here in Ireland) was as a newspaper editor and he used to always bring home hundreds of sheets of newsprint and Bic biros for me. I used to spend my days drawing planes, the Empire State Building and stick men. Then one day my father came home with a Transformers comic for me and my life changed. I was completely drawn into this wonderful world of noble heroes, insane villains, crazy humor, ultra grim dark storylines (seriously, the UK comic continuity killed off more characters in horrific ways than George R.R. Martin having a grumpy day – go check out the Time Wars story, it’s collected in a book now I think) and frickin’ shape shifting robots.

My obsessive streak was born here. I would spend hours upon hours, day after day copying and re-drawing the comic strips onto my little sheets of newsprint, completely lost in my first experience of pure, beautiful, freeing escapism. Real life might not always have been too much fun, but Optimus Prime was always there for me no matter what (apart from a brief period after the movie where Hasbro temporarily ruined the lives of a generation of kids so they could flog us their new toyline – you pricks!). It even gave me some common ground and something to talk about with a few of the kids in school, which was really nice.

So yeah, Transformers are special to me. I am really glad no one ever went and rebooted the series into a modern version with more focus on bland boring, whiny human characters and lame sex jokes than the hundreds of colorful, wonderful characters in the actual lore, while killing off a crucial protagonist midway in the third one in a horrific way without any other character even acknowledging it for the remainder of the film, and the very next scene stunting any possible emotional impact by cutting straight into more fucking sex jokes and- ARGH. Because if someone went and did that it would really SUCK.

There was a temptation to do a serious song for Transformers, but it felt more right to make it fun. I love 80s and 90s kids cartoon themes – some great ones were Thundercats, Jayce & The Wheeled Warriors, MASK and of course Ulysses 21. There’s a real bursting, positive, innocent up-tempo energy to them and that’s what I wanted to recreate. Many have mentioned a few of my songs sound like 80s kids show themes and I can totally see why, it’s because I love them.

I made the transforming noise and robot voices from scratch using my music gear. There are no samples of the show or game in the song. I had to download an entire separate synth plugin (think of it like DLC for your synthesizer program) to create the transforming sound. It took about 2 hours to go from a vanilla sine wave into that wonderful iconic noise that no one was ever able to recreate in the playground. The Soundwave voice had to be right too, given that, well, my friggin’ music project is named after him. It’s a closely guarded secret how they made his voice but I think I got it pretty close – at least it’s certainly the closest I have heard that isn’t the actual show itself.

The electro synth plus drums in the verses are a homage to the amazing soundtrack from the old movie and the chorus is a tribute to the cheesy anthemic 80s pop-rock songs in it (“You got the touch! You got the POWAAAAH!”).

As for the lyrics, not much to say really. They are pretty straightforward and self-explanatory. I especially enjoyed writing the ones giving little digs at that movie that totally doesn’t exist in my wonderful world of denial and nostalgia.

This one got a great reception. It was really nice to have the extra two weeks to let the song develop. I got to try lots of ideas and pick the best ones, so I’ll be sticking to this routine from now on.

Criticisms:
Now I have to buy the Cybertron games, and it’s all your fault!

Please do! They really are great games and extremely faithful to the G1 lore and characters. Some of the jokes in the cartoon and movie even make their way in, unchanged. The newer game is also a ridiculously fun and varied set-piece filled shooter. I loved it.

Ha! Yeah, Grimlock strikes me as the kinda guy who would actually “om nom” his food.

When you find the secret formula let me know. Though I have a feeling your attempts would be … inferior.

I never understood why the new Transformers movies made people mad until today.

Mission accomplished. The new movies are the equivalent making a Borderlands game with 3 guns in it.

I feel like things such as a list of characters’ names and their marketable trait is kind of … Cheap. Like you’re just trying to fit in as many references as possible?

That was based on the idea of the song being akin to a kids’ TV show intro.

Yeah, I got that one wrong. I made an emergency edit for the Bandcamp/Itunes version and now Grimlock’s line is correct.

Apparently you’re not. A few people said it. Oh, well.

I have to give mad props to Justin for the video. It fits the song perfectly and the splicing of footage from the cartoon was a smart move.

It was definitely one of the best videos yet, up there with “The New Black Gold” in my opinion.

Funny note: Every time Optimus told the Autobots to “Roll out” in the Bay movies, they just ran. Apparently they couldn’t even get THAT right.

What is this “Bay movie” you speak of? I know of no such thing.

In closing, let’s just have a little honest moment here. Yeah, the first movie wasn’t too bad. It has some fun moments, cool action and it was great seeing Optimus in live action for the first time. Sam wasn’t as excruciating in it as he was when he whinged and whined his way through Revenge of the Fallen and Dark of the Moon. Next time though, I wish they would give subject matter like this to people like Neill Blomkamp or Joss Whedon.

See you next month!

Dream of the Sky