Every year, we here at The Escapist get the chance to share with you the games that we liked the most in the preceding 12 months. The past few years have been an embarrassment of riches for gamers, and 2016 was no exception. There were plenty of great games released this year, but these five were my personal favorites. 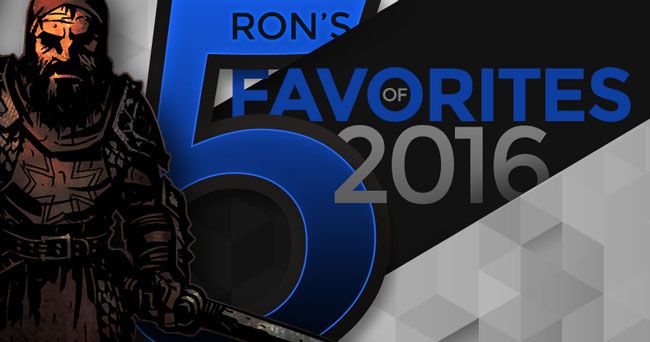 Developed by Eidos Montreal and published by Square Enix. Released on August 23, 2016. Available on PC, PS4, and Xbox One. Review code provided by publisher.

Set two years after the events of Human Revolution, Deus Ex: Mankind Divided might have caused controversy with its use of “mechanical apartheid” as a tagline, but it perfectly described the feeling the game evoked. In the wake of the Aug Incident, augmented citizens are looked down upon, segregated, and feared.

You’re filling the heavily augmented shoes of Adam Jensen once again, and you’re now part of an Interpol team that’s hunting down terrorists (oh, and also working on the side as part of a group taking on the Illuminati, of all things). You’ve got a bevy of augments, and you discover that unbeknownst to you, you have several more installed early in the game.

As you’d expect if you played the previous game, choice plays a large role in Mankind Divided. Side quests can affect character attitudes, and how you approach one mission may come back to haunt you later. You can also expect to have the option of shooting your way through the game, or picking your way along stealthily. Whatever you choose, you’ll likely feel compelled to play it a second time to try out something different.

Deus Ex: Mankind Divided tackles mature themes in a story that emphasizes choice. It lets you play it your way, but it also brings your choices home to you in the end. It scratches an itch for fans of shooters, narrative-driven games, RPGs, and stealth games alike. In short, if you haven’t played it, you should.

Developed by Arkane Studios and published by Bethesda. Released on November 11, 2016. Available on PC, PS4 and Xbox One. Review code provided by publisher.

Dishonored captured my attention when was released in 2012, so it’s no surprise I had my eye on the sequel. Despite a few small problems, the follow-up was just as solid as the original.

Dishonored 2 returns us to Dunwall, where Emily Kaldwin has been Empress since the events of the first game. When Emily finds that she’s had her throne stolen by a usurper, she must fight to regain it. You can choose to play as either Emily, or as her father (and protagonist from the first game) Corvo Attano. While both playthroughs are largely similar, there are some minor differences.

The game requires you to work your way through those who have supported the usurper, either killing them or rendering them meaningless through other means. As in the first game, you’ll have otherwordly powers at your disposal thanks to the Outsider, who is the Dishonored universe’s version of Star Trek Q. Both Emily and Corvo have their own powers that can be upgraded, and you can choose how your character progresses. Some lend themselves to stealth and silence, while others are more suited for going to the “murder everyone I see” route.

The new setting of Karnaca is, much like Dunwall, engrossing and interesting. The game’s writing is superb, even if the voice acting lets it down from time to time with its disappointingly wooden quality. But the best thing about the Dishonored games is that they are rarely black and white, and the writing reflects this.

While Dishonored 2 did suffer from some performance issues on PC at launch, those have been rectified now, and it’s a must play for fans of the first game, or those who enjoy sneaking about a gorgeous world, plotting havoc on those around you.

Developed by id Software and published by Bethesda. Released on May 13, 2016. Available on PC, PS4, and Xbox One. Review code provided by publisher.

In May of this year, id Software wrote a love letter to old school gamers, and they titled it Doom. It eschewed the more careful, cover-based shooting style of recent years in favor of a hectic, run-and-gun design that recaptured perfectly the feel of old-school shooters.

Like most classic shooters, you can pack around a ton of weapons, from the lowly pistol to the Gauss Cannon to Doom‘s signature weapon, the double-barreled shotgun. In addition to the weapons, you’ll find a lot more here that feels familiar. The frenetic pace sets it apart from most other modern shooters, and the game’s design encourages you to keep that pace up.

It does this through a system id calls “Glory Kills.” When an enemy is near death, they’ll flash and stagger, and you can finish them off with a variety of suitably gory melee attacks. Doing so causes them to always drop precious health kits, which are important because there’s no regenerating health here. The modern touch is a robust weapon and armor upgrade system that is dependent on you finding the necessary items to improve your gear.

There’s a multiplayer mode that’s just OK, but you’ll find yourself coming back to Doom over and over again not because you want to play with friends, but because you can’t wait to play through the campaign one more time. The gameplay is absolutely pitch-perfect, and it embodies the classic shooters in so many ways that make it almost impossible to stop playing.

If you love classic shooters, you absolutely must play Doom.

Developed by DICE and published by EA. Released on October 21, 2016. Available on PC, PS4, and Xbox One. Review code provided by publisher.

If you’re a long-time fan of the Battlefield series, you’ve probably got a favorite game or two that you always want to go back to. For me, those were the early games, specifically Battlefield 1942. This year, DICE made a move back toward those games by going even further into the past – all the way back to World War I – for Battlefield 1.

Battlefield 1 isn’t a WWI simulator, but it’s a really fun first-person shooter set during the time period. There’s a really interesting range of weaponry available in the game. You can find yourself blasting away with a bolt-action rifle from horseback, only to have a primitive tank come flying over the hill in front of you.

Speaking of tanks, the series’ signature vehicles are here, but they’re far less powerful than you’ve become accustomed to in recent entries. They feel more like those in BF 1942 or Battlefield: Vietnam, in that they need infantry support to survive for long periods on the battlefield.

The multiplayer is the best Battlefield has been in years, mixing new and old multiplayer game modes. The highlights are of course Conquest, which we all know and love, and Operations, the newest game mode. It tasks you with attacking or defending across a series of objectives. The attackers try to take all the objectives to shift the front lines back, and the defenders try to hold until the timer runs out. It’s my favorite new mode the series has added in quite some time.

BF 1 also packs in a pretty decent single-player campaign. Told as a series of “War Stories,” it drops you into different parts of the war. Each story focuses on one character for a few missions, and then you can jump to another part of the war. They’re not based on real events, but they can be enjoyable. The campaign is short, and a little simplistic, but it is fun.

Battlefield 1 brought back my love of the series in a way that I didn’t expect, and I’ve spent a lot of time playing it. The move to World War I was exactly what the series needed, and I think the genre needed it to. In a world of futuristic shooters, BF 1 is the old-school experience you’re looking for.

Although it was funded on Kickstarter in 2014, and debuted on Steam’s Early Access in February of 2015, Darkest Dungeon didn’t get its full release until January of this year (on PC, the PS4/Vita version released in September 2016). It’s a mashup of several genres, including turn-based strategy, role-playing, and roguelike, just to name a few. You’ve inherited your family’s ancestral estate, but your most recent ancestor delved too deeply under the manor, and awoke all sorts of dark things. Now you have the pleasure of rooting them out, and recruiting teams of heroes to do it.

As your heroes adventure through the lands, they’ll face not only the challenges of monsters, traps, and other hazards, but they’ll also be confronted with the mental toll that such an existence takes on them. It’s imperative that you not only keep your heroes alive, but tend to their sanity as well. Critical hits, enemy special attacks, and other factors can raise the stress level of your stalwart adventurers, and enough stress can cause them to have their resolve tested. This can result in either the hero gaining a negative trait or a positive one, and can often be the difference between a mission that succeeds, and a mission that ends in dismal failure.

As heroes die, you can recruit new ones to take their place, but you’ll have to work to raise their level once again. Compounding the challenge is the nature of Darkest Dungeon‘s save system. There is no save scumming; no reloading to try again. Instead, the game automatically saves constantly, making almost every action you take permanent. This lends great weight to your decisions. Do you press on to the final battle in that dungeon and risk your battered, stressed-out heroes paying the ultimate price, or do you retreat, knowing that it will cost you a significant amount of coin to do so?

Darkest Dungeon is filled with choices like this, and they can be the difference between advancement and setbacks. Which heroes will you take? What trinkets will they use? How will you provision? All of these questions demand answers, and all of them will affect how successful you are. No matter what you choose, you’ll find that the hardest thing is walking away. The game’s unique art style, unpredictability, and sheer challenge make it something that you can’t seem to stop coming back to.