Samurai Warriors 4: Empires is a game that lets you do a lot of… stuff. Yes, that sounds awkward and vague, but that’s because the game itself feels awkward and vague. The pretenses for your actions are poorly explained and the effect that gameplay systems have on everything else is poorly defined. I wouldn’t call it bad, unfun, or even badly designed, but it is overwhelming. It’s like you were given a huge sack of different toys and then were told you can play with all of them at once. 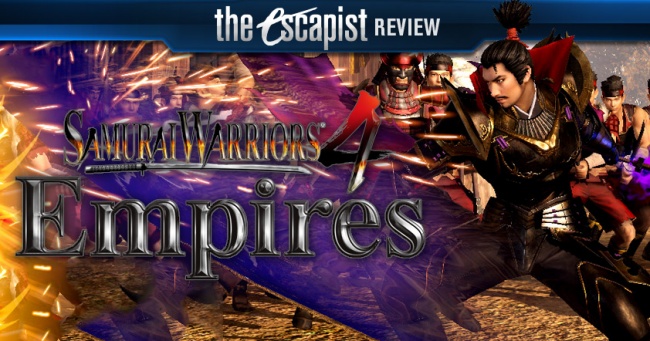 If you’re unfamiliar with the Warriors series, let me give you a crash course. You are the general of a great army. Your troops are locked in combat with the enemy, and would be in a stalemate forever, if it weren’t for the fact that you are so much more powerful than a common foot soldier. Simple attacks kill several enemy units at once, and by the end of battle you will have thousands of kills attributed to your combat prowess alone. Your goal is to be a terrifying god general; cutting down swaths of enemies as your army slowly pushes the opposing force back, capturing their base. It’s a strange combination of action, RPG, and MOBA that appeals deeply to anyone who enjoys mindless button mashing.

In Empires, you take control of notable historical figures and factions during the Sengoku Jidai. If that sounds like jibberish to you, then so will the entire game as little attention is given to backstory. Brief cutscenes play out between battles, but they’re little more than trash talk. While characters say things in the middle of battle, it’s impossible to pay attention when a million soldiers have katanas pointed at your throat. Samurai Warriors expects you to be familiar with Japanese history simply because you are the type of gamer who purchased a Samurai Warriors game. While that might be a safe assumption, it also makes it impossible for the rare newbie to get invested.

Your goal is to fulfill your faction’s ambition, whether it’s to unite Japan, kill another clan, or simply murder a figure of interest. You do this by winning the aforementioned MOBA/Action hybrid battles. When you win, you spread your territory, which opens up more of Japan. This lets you pick more difficult territories to invade with more difficult battles to fight. Lather, rinse, repeat.

Between battles you devise your army’s strategy. You have to appoint a leader and six magistrates covering war, politics, and economics. Each magistrate has different strengths and weaknesses, different policies they implement, and different relationships with other magistrates. Effective politics will affect things like the amount of gold and food you have, your troop strength and loyalty, and even your fame!

These magistrates can then issue directives which have a number of effects such as learning new troop formations, forging new weapons, increasing resource yield, and rewarding war generals. You can recruit new offers, expel traitors, fraternize (no really this is a menu option), and after you spend about an hour screwing around with all your options you can finally get to the next battle phase.

Except before you go into battle, you have to go through more menus! You have to choose when, where, and how to attack. You need to choose how much gold and supplies you’ll commit which effects which generals you can bring and your time limit. Each general has their own unique ratings in health, defense, attack, speed…. and ride! All of these are then further affected by the equipment you bring into battle, and the individual rules of each confrontation. 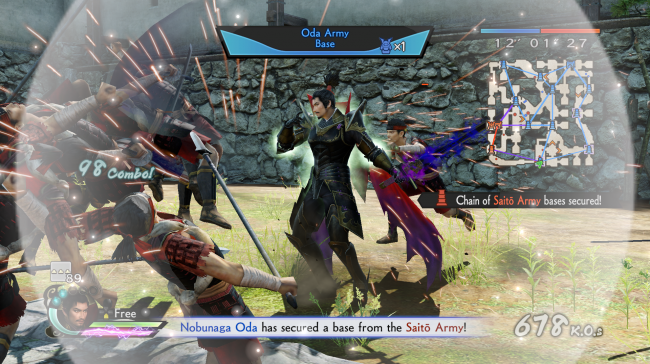 So finally you manage to make it into battle and what do you do? You press a button until everything around you dies. Sure, the game says there are more options. You can alternate between weak and heavy attacks, AOE attacks, special buff commands, and your all powerful musou attack, but in reality everything around you simply falls to pieces if you spam the weak attack button. The only trouble you’ll ever have is when you are facing enemy generals, and even then the only strategy you have to figure out is when there is an opening to mash weak attack.

The rest of the game mirrors the tone of the battle system, which is to say it has a lot of options but you can ignore most of them. When I first started the game I was obsessed with enacting new policies and figuring out perfect magistrate combos, but soon I was fast forwarding through menus to get to the next battle. Heck, even the options menu has more options than are strictly necessary. There’s an option that determines whether or not female officers show up. Its oddest option I’ve ever seen. I ignored the sausage fest toggle and everything else except for the difficulty option.

The game’s weak tutorials only compound the problem. Mechanics are explained through splash screens that pop up every few seconds. They throw dumps of info at you all at once, neglect to mention specifics about what equipment does or what stats mean. You can go into the game’s manual to get a better explanation, but that involves sitting in front of your TV reading through each individual entry, and no one has time for that. We just want to start killing troops and building up combos.

The game is a bit too large for its own good. There are so many things to do that each individual decision barely matters. The action is fun, though button mashy, and the politics are fun, though complicated, but I’m rarely in the mood for both at the same time. Granted, that’s kind of the MO of the Empires wing of the Warriors series, but previous entries in the series managed to integrate all their systems better. I would have liked to see Samurai Warriors 4: Empires have a little more focus. It would have made the difference between a fun but forgettable diversion and a genuinely solid game.

Bottom Line: Samurai Warriors 4: Empires is fun, but scattered. It’s a decent diversion but it’s complexity and lack of transparency will keep you from being hooked.

Recommendation: Fans of previous warriors titles will likely enjoy this one as well, but it’s a poor title to act as an introduction to the franchise.