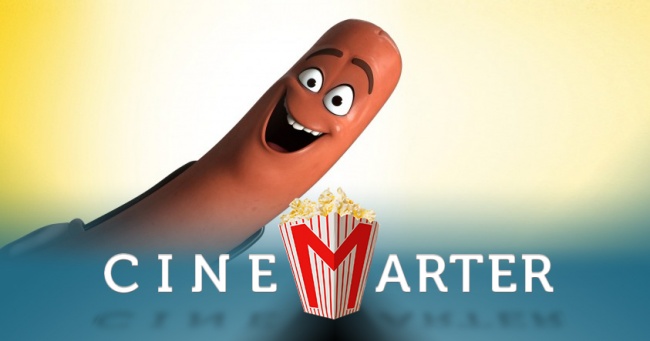 Frank (voice of Seth Rogen) is a sausage living in a supermarket with a package of other sausages, with two goals in mind: (1) be chosen by a human – a god to the food – and (2) finally be able to insert himself into a bun, Brenda (Kristen Wiig). He, like the rest of the food, believes that once purchased by a human, he will live happily ever after with the rest of the chosen in “the land beyond,” which will see you have your every need met.

Essentially, the various food items have some idea of a perfect afterlife. They’ve concocted “rules” by which they live their lives in hopes that it will increase their odds of being chosen – rules that prohibit them from acting in ways that would provide them with instant happiness. Short term pain for long term gain, I suppose. They have no proof of what happens afterward. At this point, you’re probably figuring out that the food are practicing religion – various types, but all with the same basic ideas – and that computer animated film about talking food items isn’t just about Seth Rogen and his gang of friends making a raunchy cartoon. It’s only a few minutes into Sausage Party that it should dawn on most audience members that we’re not just here to watch food swear; we’re here to think about religion, tolerance, social taboos, and culture clashes. And as many four-letter words as one could fit into a movie that doesn’t even reach a running time of 90 minutes. 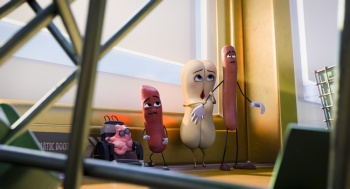 Yes, Sausage Party is a very crude movie. It’s raunchy, it’s profane, it’s sex-crazed, it gleefully revels in its central wiener-and-bun metaphor, and its eventual big bad is a roided-up douche (Nick Kroll). None of that should be expected given the filmmakers behind it. What is surprising is how thoughtful, how smart, and how philosophical is gets at time – to the point where it’s not a stretch at all to call it the anti-VeggieTales.

The plot hinges on Frank finding out that, after the food is purchased, unimaginable pain and then death follows. They were all lied to. Can he convince the rest of the food to stop blindly following their previous belief? And even if he can, what then? Or even should he? The film isn’t as anti-religion as you might think, eventually concluding that, well, Frank doesn’t know what to do, what to truly believe, or what comes next. It isn’t a subtle, though, and is more of a film that gets its points across with words than actions. It comes across as a bit too preachy as a result, but that’s only a minor problem.

It helps that the film is incredibly funny, generating a very solid laughs-per-minute ratio. It’s raunchy, crude, and sometimes goes too far – to the point that you might feel bad about laughing – but it isn’t ever unenjoyable. It also has lots of food puns, parodies of scenes from other films, and a good amount of visual comedy. Lots of those wind up being “mature,” too, but there’s cleverness to them, and if you’re bothered by this sort of thing you’ve hopefully already realized that Sausage Party isn’t for you.

Sausage Party is a riot, but it’s a riot with some real thought behind it and some genuine philosophical points to make about religion, cultural differences, and social taboos.

Given a relatively small budget for an animated feature – it would be a difficult task to convince a studio to invest heavily in a movie with this premise – Sausage Party looks pretty good. The animation is solid and it’s styled in a way that it can be a little sloppy and still look good. They didn’t even use product placement to help with the financing! It’s never beautiful but it doesn’t have to be. It’s functional. It could have become another Foodfight!, after all. And that’s not something anyone, beyond the most sinister of individuals, would wish upon the world.

A lot of funny people fill out the voice cast. Seth Rogen is our lead, and is as reliable as ever. He’s joined by the likes of Kristen Wiig, Jonah Hill, Michael Cera, Danny McBride, James Franco, Paul Rudd, Craig Robinson, Nick Kroll, Salma Hayek, Edward Norton, Sugar Lynn Beard, Anders Holm, and David Krumholtz. Most of those are pretty well-known talents. And you can’t even tell with someone of them. You won’t know who Edward Norton is for most of the film just by watching it – although with that comes a self-aware last couple of scenes that didn’t quite work, as far as I’m concerned.

Sausage Party is a riot, but it’s a riot with some real thought behind it and some genuine philosophical points to make about religion, cultural differences, and social taboos. It’s also incredibly crude and very funny. Thanks to a thoughtful script, strong voice actors, solid animation, and more four-letter words than you can shake a stick at, Sausage Party is an unexpectedly great film.

Recommendation: Unless you don’t like crude humor, Sausage Party is absolutely worth checking out.