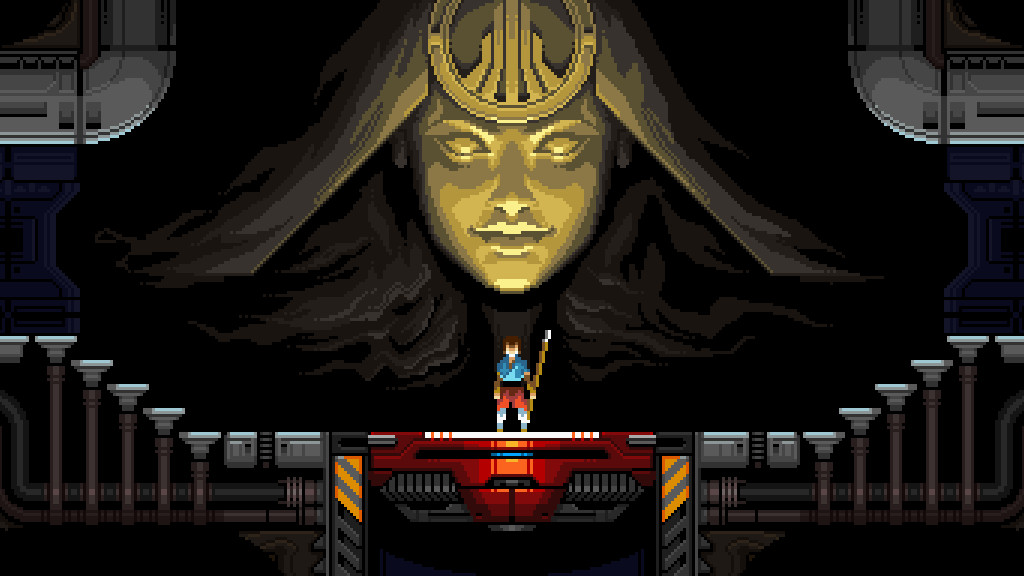 Savior is a 2D action adventure game in static screenshots, but developer Starsoft is promising so much more than that — and a successful Kickstarter shows that people believe in their vision. Indeed, early trailers have shown off a game with combat and parkour that seamlessly blend together engaging gameplay with intense moments. Mix in a Metroidvania structure, dialogue trees, and a few dragons, and suddenly Savior is set to impress in a big way when it releases sometime in the next few years.

Project and art lead Weston Tracy recently took the time to talk with The Escapist about Savior and Starsoft’s plans to live up to player expectations. The studio is using its experienced team to create a retro title that feels fierce and cinematic. There is a plethora of other projects Starsoft has pulled influence from, sure, but the total package is primed to be something even the most seasoned gamer has never seen before.

The Escapist: What is the elevator pitch for Savior?

Weston Tracy: Savior is an open-world action platformer with parkour-style movement and Punch-Out!!-style combat. It’s centered on repairing a broken society. You’ll battle and talk your way to reuniting a divided people. You’ll rebuild broken buildings, heal the sick, feed the hungry, and solve the mystery of your origins. Your task is to solve everyone’s various problems so they can save themselves.

Tell us about Starsoft and how the idea for Savior came to be.

Tracy: We’re a few industry vets, and a few experts from outside of games that have come together over our love of pixel art and action platformers. It’s an extraordinarily experienced group taking on our first game as a team. We have a software team lead from the Department of Defense, the sound designer from Black Panther, and the ex-head of indie games at Nintendo. Just a lot of incredible talent.

The idea for Savior came from playing dozens of 2D action games, starting with Metroid. As I played more of these, I always wanted a reason to be more invested in the world and the characters. I’d just run through levels and generally destroy every other creature I met. It seemed disposable (by necessity) in early NES and SNES games. But now we can add more depth and engagement with the environment and the NPCs.

Savior looks extremely ambitious. How long has Starsoft been working on the game?

Tracy: It is an ambitious game. It’s especially so because, until recently, we’ve been working on it largely as a part-time project. I started as the sole creator around four years ago, working nights and weekends. Now I’m grateful to have a bunch of master craftsmen helping me out.

Tracy: I’m a Trekkie, so Star Trek is a key influence. Episodes like “The Return of the Archons,” “Who Watches the Watchers,” and many others are all over Savior’s story.

Graphics are influenced by A Link to the Past, Ghouls and Ghosts, and Metal Slug, mostly. The look of the world is also based on my home state of Oregon. We’re using Oregon’s ocean, mountains, and desert to build out Savior’s planet, Arcadia.

A lot of people say the game’s parkour style traversal mechanics remind them of the original Prince of Persia. Although that wasn’t one of my original inspirations, it’s definitely an honor to be compared to that game. 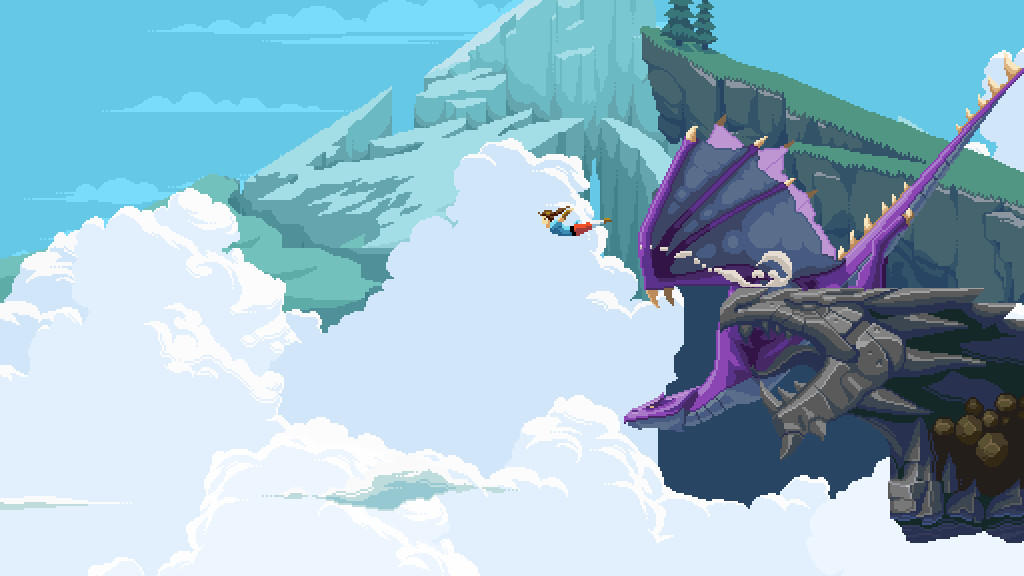 What is Savior’s core gameplay loop? Can you elaborate on some of the game’s RPG mechanics?

Tracy: Savior is based on a quest system. You’ll complete quests so you can gain experience points, so you can gain levels, so you can power up your character, so you can take on bigger quests. Finding and completing quests largely depends on your building relationships with the people in the world. So, there are a bunch of RPG elements in there.

What has the team done to keep the game varied throughout its campaign?

Tracy: The central threat and challenges will change dramatically. At first, you’ll be overwhelmed by a single soldier or tasked with retrieving a single item. Later you’ll be cutting through a platoon of soldiers with ease, on your way to free a whole city. The scale of your impact, challenges, and power will grow exponentially. Some ramp of character power is common in the genre. But we’re looking to expand that to an ability to influence and change the world itself. For example, depending on how you accomplish your tasks, the NPCs will interact with you differently.

One of the things that jumps out to most people who have seen gameplay for Savior is the game’s fluid combat animations. I read that the combat is purposefully engaging and based on memorizing enemy attacks, but how will that change for different enemy types and bosses?

Tracy: The individual opponents will have relatively simple attack patterns that you can learn quickly. But they will often work as a team in emergent ways that will make every engagement different. The spearman will charge you, the swordsmen will box you in, the archer will perch out of range and snipe you. We’re keeping the overall enemy count low and focusing on more complex behavior and group interactions. We think this will keep combat perpetually fresh.

In terms of general difficulty, will Savior be a game anyone can pick up and play, or is it for more skilled players?

Tracy: I went into this committed to making a platformer my mom could play with ease (and she’s not a gamer). We want to keep input simple and add prediction and context to bring life and excitement to the flow. It feels like you’re performing amazing feats of acrobatics and combat, with simple input. The challenge is focused on larger strategy, less on the twitch action. So, if you let yourself get boxed into a corner, it will be tough to survive that. But if you play smart and stay out of bad situations, you can save yourself a lot of punishment! 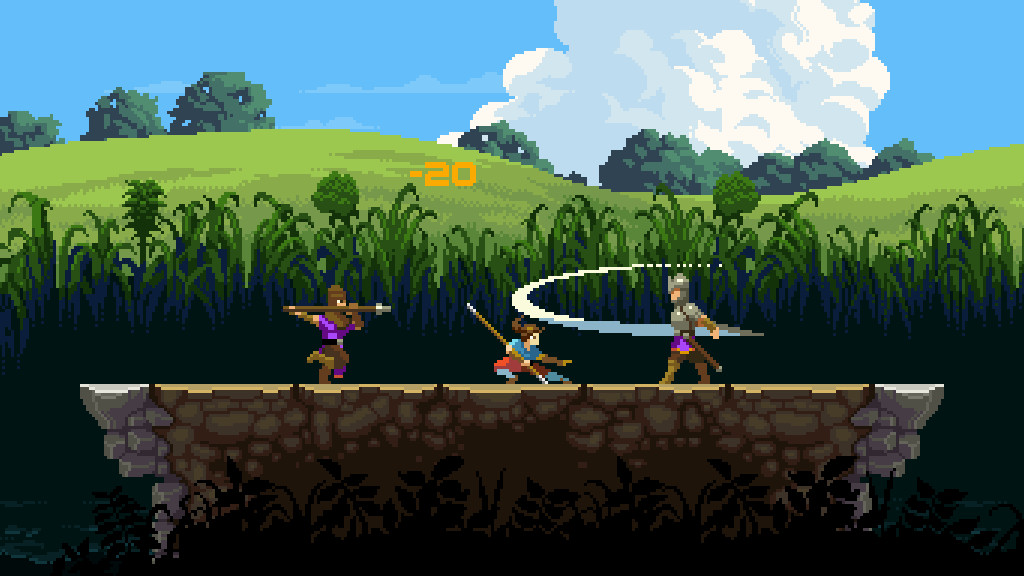 How important are Savior’s dialogue trees to the overall game? Do they occur often?

Tracy: They will be important, but short and simple. They will allow you to discover some quests, treasure, and vital information. But most importantly they will be an opportunity to turn strangers and adversaries into friends and allies. When and how the story progresses will be tightly tied to the dialogue. But don’t worry — Savior is not a game about reading pages and pages of text. Every syllable will be scrutinized for necessity.

Breaking off from the previous question, is the game more concerned with offering a gameplay or story experience?

Tracy: Gameplay is king and queen in my mind. Story is mostly there to support gameplay, but gameplay is that much more fun when you have compelling reasons to do the things you’re doing.

As an example, going back to dialogue — my first priority there is to make the UI engagement of the dialogue trees fun. The pop-up text bubbles, sounds, character expressions etc. need to be engaging, clear, and satisfying, first. Then we can add fun, compelling dialogue based on an epic adventure story.

What lengths have the team gone to in order to ensure Savior offers a unique experience that no one has ever played before? I saw in a comment from one of the developers that the game sits “firmly in the Metroidvania genre,” so how is the game growing on preexisting titles in the genre?

Tracy: We’re definitely keeping the Metroidvania framework. Where I think we’re adding uniqueness is in how you relate to the characters and world: being able to win over opponents with thoughtful dialogue, rebuild and modify your environment and engage in emergent, deep melee combat and predictive parkour. These are all unique points, I think. We’re also leaning hard into “epicness” with action slow-mo, massive vistas, blockbuster movie level sound FX, a synthwave rock ballad score, and dragons!

Some highlights in trailers for the game see Savior’s lead character diving on to dragons and slow-motion backflipping over arrows. How scripted are these moments? Are moments like these purely cinematic or will they be tied into gameplay?

Tracy: Both those moments are entirely tied to gameplay. Any time you dodge an arrow at the exact time of the arrow release, your dodge will be slow motion. I love cinematic moments, but I dislike cut scenes. So cinematic stuff will happen, but you can still control your character. You can walk around or swing your sword during a big speech, or you can bail last second on the dragon jump. Then the poor dragon will have to fly away rider-less. 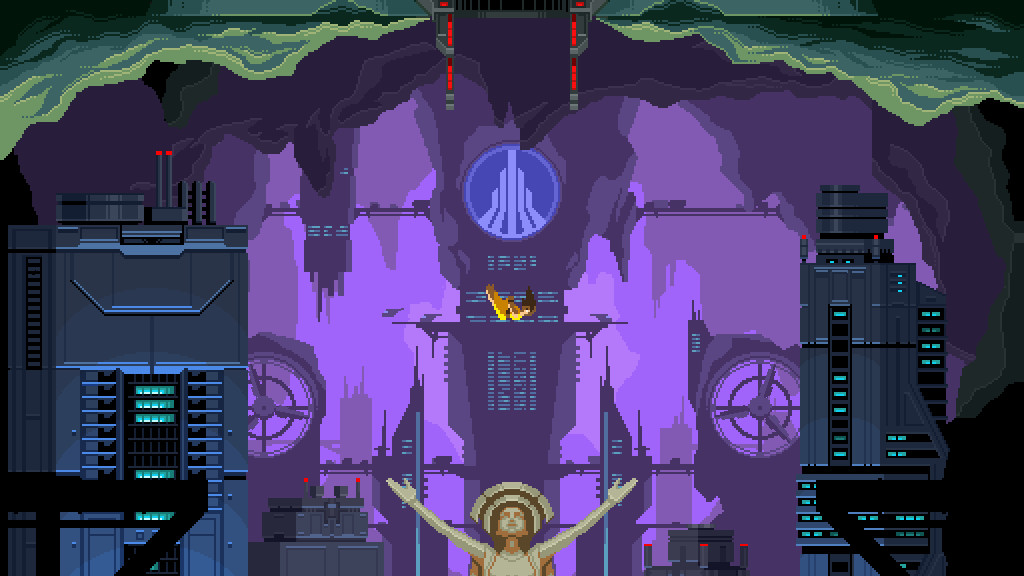 How long do you expect Savior to be for a first-time playthrough?

Tracy: We’re shooting for 10-15 hours, but we’ve got a ways to go in our development process. I could see the game being a lot longer or perhaps a bit shorter.

You have not announced any plans for a physical release. Do you hope those plans change, and could we ever hope to see a physical version of that nostalgic mock-up on the Kickstarter page?

Tracy: I’d love to do a physical release. We’ll just have to make sure it makes sense. It would probably be something we do after an initial digital release.

When does the team hope to release Savior?

Tracy: At our current pace, we’re expecting 2022, but we adhere to (Shigeru) Miyamoto’s mantra that a late game will eventually ship, but a bad game will be bad forever. We want to ship it when it’s ready.

Is there anything else you’d like to tell us about Savior, Starsoft, or development as a whole?

Tracy: Our goal at Starsoft is to capture the magic of nostalgia and fuse it with modern graphical depth, design, and narrative, then wrap all of that around a provocative, thoughtful story.

With Savior, I just can’t wait for players to inhabit this world we’re creating. It will be filled with colorful, complex characters, with gamified character arcs. There will be hundreds of details, references, and secrets to discover. And you’ll be thrown into a fantasy epic that will, I hope, engage you on many different levels.

It’s an amazing time to be an indie developer. It’s been incredible how much support we’ve gotten, and how much inspiration we’ve had from other incredible projects.

If anyone wants to stay abreast of the latest and greatest developments, they can follow me on Twitter (@WestonPDX) or go to saviorgame.com to sign up for our newsletter. We’re planning on sending out development status updates about once a month.