f you grew up in the era of early first person shooters, you are likely familiar with the concept of screencheating. This is when an opponent looks at your screen to figure out where you are on the map, instead of simply keeping eyes on their own screen. What was a social faux pas in the past has now been turned into the central gameplay mechanic in a new party shooter called, appropriately enough, Screencheat. Now it’s clear why you couldn’t get your friends to stop doing it in the past. Screencheating is fun! 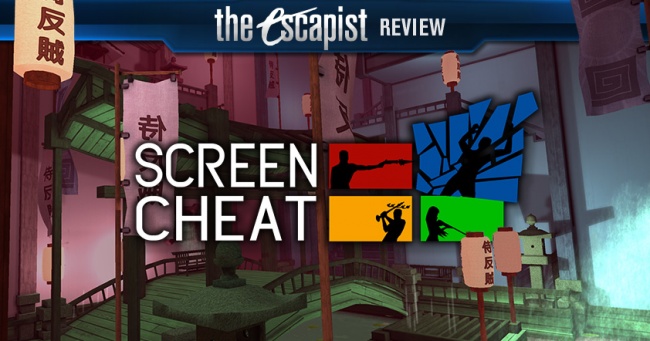 The concept is simple: Shoot your enemies, just like any other FPS. The catch is that everyone is invisible. So the only way to reliably locate your opponents is by looking at their screen, i.e. screencheating. Get it?

The maps are set up to make screencheating easier than it would be in a traditional FPS. Different sections are painted with bright contrasting colors so you always know what general area a player is in. Some map objects, like curtains, move when a player passes by or through them. Any usable map object, like a jump pad, has a bright visual effect when someone uses it.

Weapons also give away your position. Besides the sound they make when they fire, guns will smoke for a second after being used. Harpoons will leave trails through the air as they fire at the opponent. In general, the easier it is to hit an opponent with a weapon, the larger the alert it gives when used.

This setup inverts a couple other shooter tropes that we have become familiar with. Guns with wide spreads, like shotguns, can be considered the most “accurate”. Pinpoint accuracy guns like a revolver are harder to hit with, but safer to fire. You have to unlearn a lot of your shooter instincts in order to play Screencheat, which is fine because it feels more like a party game anyway. Since any hit kills your opponent instantly, your enjoyment comes from hilarious moments where you finally land a perfect shot on an invisible opponent, not using cover and working with a team.

Screencheat’s biggest strength is its variety. Weapons range from revolvers and shot guns, to candlesticks, wooden horses, and a laser sighted gun that shoots through walls. Stages can be a simple as a multi-roomed mansion, to a complex gravity warping series of tunnels and walkways. Its selection of game modes holds perhaps the most variety. Simple modes like Deathmatch and Juggernaut are present, but Screencheat also gets innovative by introducing a coin collecting mode and a “whodunit” style mystery and assassination mode. If you are up for a little chaos, you can activate party mode which cycles through each map and mode to keep gameplay fresh.

Screencheat’s biggest weakness, however, is its small fanbase. It’s incredibly hard to find someone online and when you do, latency makes their simulated screen less then accurate. It’s at its best when played with a group of friends in local multiplayer, but even then that requires a full controller set which is becoming rarer with the prominence of online play. Not to mention, you absolutely need a relatively big TV to play this game, otherwise the split-screen display will be too small to see. You’ll be a hit if you bring Screencheat to a party, provided the guests have fond memories of Halo or Goldeneye, but that means lugging your entire PS4 setup around. If you aren’t the party going type, you can play with bots, but the AI is practically psychic to the point where, appropriately enough, it feels like they’re cheating.

But if you can find a situation where people actually want to play Screencheat with you, you’ll have a great time. It’s a fun game when all is said and done, and it’s being sold at a budget price.

Bottom Line: Screencheat is undeniably fun, party/shooter hybrid which brings back fond memories of the good old days of split-screen.

Recommendation: Fans of old arcade shooters will experience a burst of nostalgia when they pick up this game, while any casual party gamer will learn to enjoy it.