Let’s go straight into the comments for once, in celebration of the fact that the new Extra Punctuation schedule actually allows me to reply to comments from the most recent video.

“…this game is pretty much only limited to your imagination so it shows Yahtzee isn’t all that imaginative…”
– jamesmchapman, from the Scribblenauts comments

Except it isn’t limited to my imagination, is it. It’s limited to their imagination. The developers. If it were limited to my imagination I’d have been able to enter “difficulty curve, story campaign, connected series of increasingly complex levels and a movement/combat system that doesn’t make me want to break windows,” and been given a better game. Don’t get the wrong idea about this game – what it definitely is not is a flawless miniature Star Trek holodeck that will manifest your every whim. And good thing too, because as entertainment goes I couldn’t imagine anything duller.

What, exactly, Scribblenauts is, or rather what it was supposed to be, is the big question. I’m going to stop calling it a “game.” The “create anything you want” concept poses no real challenge or structure. As the video may have implied, I suspect it’s a chance for a developer to show off how many words they can think of and how unafraid they are of daunting art asset lists. But then again, it could just be what it appears to be: a creativity toy for idiots.

The world is full of idiots. Forgive me for the redundancy of that statement, because if you’re reading this you must be on the internet, and are well aware that you could enter communication with an idiot within two clicks of the mouse. Or even faster if you have a mirror on hand. Yes, you see, I’m saying you’re an idiot, too. I felt I should make that clearer because you’re an idiot.

And the trouble with having a majority of idiots is that they have a detrimental effect on global culture. Non-idiots in the creative industries learn that catering to the idiots is a safer bet, and when idiots themselves attempt something creative, it’s usually unappealing, derivative, fashioned from dry twigs and covered in a strange sticky fluid. I wouldn’t trust them to make a hat out of newspaper, let alone design a game.

But there’s been quite a trend of late for games that emphasize letting the user create their own experience. Little Big Planet is the most obvious example. With its editing tools and physics engine, I’d call it Scribblenauts taken to a considerably scaled-up degree. They made a system that allowed literally every single player to contribute to their library of levels. And what happened? Idiots happened, that’s what. An avalanche of copies of levels from Sonic the Hedgehog, flaming cocks and a thousand variations on a theme of “drive very fast into a wall.” 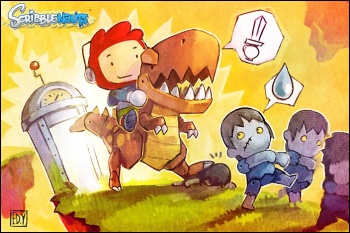 You see, games like LBP and Scribblenauts that base themselves around the promise to let your creative freedom run wild inevitably fall ‘neath the clumsy tread of the idiot’s mongoloid boot. Because non-idiots realize that if they want to be creative they could, say, download Game Maker 7, or start up a word processor and write a story about their dog, or just tear open their own fingertip and create angry art on the nearest wall. The creativity afforded to you in games like Scribblenauts is a thin and meaningless creativity within strict parameters. It’s the same level of creativity to be found in doing a Madlib. In other words, creativity for idiots.

Besides, I don’t play games because I want to extract my own fun, I want to play the fun that was made for me by professional fun-designers. This is a problem I’ve raised concerning sandbox games. If you want to have a linear story – and you will if you have any kind of story, because non-linear stories don’t and will never exist no matter what anyone tells you – then any freedom you give the player to mess about and do side-quests will distract from the pacing.

No other medium does this. It’d be like reading a novel, and every few pages there’s a crossword you can do, or there’s a little short story booklet stapled to the page that says “YOU CAN READ THIS IF YOU WANT BUT YOU DON’T HAVE TO! IT’S YOUR CHOICE!” And if you read that then it doesn’t affect the story but the rest of the pages become slightly easier to turn.

This whole “give the player choice to play the game the way they want to play” smacks of the culture of political correctness that feels everyone deserves to contribute whatever they want. It’s the endemic request for “comments” that lies at the bottom of this and every article on the internet. It’s the news program that pauses to show emails or phone messages from members of the public. I.E., members of the public who think their uninformed views are of the slightest interest to anyone but them. I.E., idiots. We’re becoming a world of cooing aunties, offering reassurance and encouragement to four-year-olds as they grinningly produce god-awful artworks that look like someone trod on a rotting horse’s head.

Of course, it’s also true that a culture of universal acceptance makes it easier for people with genuinely good products to gain exposure. There are good user-designed levels to be found in Little Big Planet, it’s just that they’re difficult to distinguish from the dross that surrounds them. Although there is one simple question that can easily determine whether a level is good:

Q. Was this level designed by someone who is employed professionally as a games designer or in another relevant creative industry?

“I was wondering if you were going to review Halo 3: ODST.”
– Jacob Probasco, via email