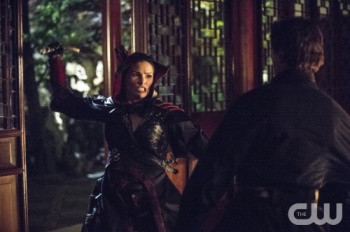 Nyssa al Ghul is back in Starling City and she’s determined to avenge Sara’s death.

“The Magician” feels like the first real step forward for season three, with the investigation into Sara’s death back in the spotlight. Nyssa al Ghul’s appearance produces new leads into Sara’s killer, and the Arrow team is back on the case. Nyssa reveals that Sara was sent to Starling City to confirm rumors that Malcolm Merlyn, The Magician, was in the city. Oliver’s mother, Moira, told The League that Merlyn was still alive in season two, using specter of Ra’s al Ghul to keep Merlyn away from her family. Her knowledge of the League and the fact that Merlyn is alive are yet another secret that Moira kept from Oliver and Thea.

Deception is the common thread on Arrow this week. Thea is likely lying about who is bankrolling her reopening of Verdant, and she continues to lie to Oliver about how she spent the last six months. I do like the symbolism of Thea rebuilding her club and herself right above where the Arrow first set up his den, though. Laurel continues to lie to her father about Sara’s death, Nyssa decides to lie to Quentin to cover Laurel’s lies, and Quentin is revealed to have lied by omission about having met with Sara a few weeks ago. Oliver is slowly telling Thea more of the truth, but only when it is convenient to him. He still hasn’t told his sister nearly the whole truth about his life.

With a little help from Quentin Lance, Laurel, Oliver, and Nyssa track down Sara’s last lead on Malcolm Merlyn. The team heads to a local monastery, established by a close friend of Merlyn, hoping to find his hiding place. Merlyn is there, hiding in plain sight, and he narrowly escapes Nyssa’s attacks, fleeing the scene. Oliver tags Merlyn with a tracking arrow, laced with nanobots developed by Felicity Smoak. We get the first jab at the rest of the team’s technological skills (as predicted) when Diggle uses Felicity’s program to track Merlyn. Of the program, Oliver says, “[Felicity] told me an idiot could run it.” Laurel and Nyssa are convinced that Merlyn must be Sara’s killer, but Oliver has his doubts, and that pushes him into conflict with both of them. 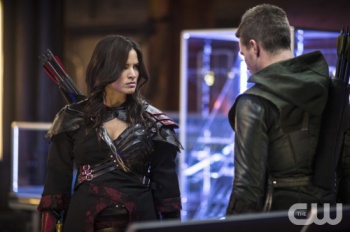 The differences between the morality of Nyssa, Malcolm, and Oliver are at the core of this episode, and it’s nice to see moral questions given some time to breathe again on Arrow. Oliver’s commitment to not killing is challenged again in “The Magician”, with even Diggle wondering if Malcolm Merlyn deserves death whether or not his was the hand that sent three arrows into Sara’s chest.

Felicity and Ray Palmer are thankfully absent from this episode. Felicity’s absence is partly due to her appearance this week over on the spin-off series The Flash, but I’ll take the victories I can get. It’s nice to see the writers are willing to do episodes where not every established character needs a part. Several episodes this season have felt like too many arrows in a quiver, and “The Magician” is the first that feels like it has its pacing right.

Arrow airs Wednesday nights at 8/7c on The CW. You can also watch the latest episodes on The CW’s website and Hulu. Spoilers and wild speculation about Sara’s killer follows. 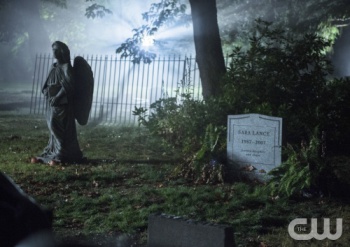 Some of the leads to Sara’s killer in this episode feel cheap. It’s been weeks since Sara’s death, and Oliver never thought that the blank piece of paper in her boot might be similar to his father’s notebook? Okay, fine. The Arrow team hadn’t thought to search for Sara’s safe house at all? Felicity couldn’t triangulate something with technobabble and GPS? Okay, fine, I guess. It would have been more interesting to have some of this information come out more slowly, but Arrow is about action, not mystery, and it does deliver on the action. The assault on the monastery looking for Merlyn is another nice showcase of the coordination and effectiveness of the Arrow team, though it did leave me wondering if perhaps Diggle deserves a mask of some kind, something to protect his identity. After Thea is kidnapped, the three-way showdown between Nyssa, Oliver, and Merlyn is exciting, a literal combat between their three ideologies.

Speaking of Thea Queen, I have to say I’m really enjoying what Willa Holland is doing with her. She didn’t have much to do in this episode, but whenever she was on screen she was fantastic. The little indications that she’s lying, her pauses before she responds to Oliver’s questions, and the tension in her arms when Nyssa attacks her that she consciously relaxes when she realizes that fighting would give away her secrets to Roy make Thea really engaging to watch. Of course, she’s now lying to everyone who cares about her, and she’ll have to recognize that she has taken the same route that left her so hurt before.

This episode also has some of the best lines in the season so far. When Nyssa al Ghul pays her respects at Sara’s grave, she calls out Laurel for wearing her sister’s jacket. “You are not fit to wear it,” sneers Nyssa, and she’s right. Laurel is running on rage and instinct. She needs a code to live by if she wants to channel her anger into something effective, good or bad. Quentin Lance’s offhand comment, “The fastest way to a cop’s heart is through his liver,” tells us a lot more about him than the beat cops he’s supervising. Finally, John Barrowman gets some comic book-worthy lines for Malcolm Merlyn, saying, “There is blood on my hands, almost too much to contemplate. But none of it is Sara’s.” 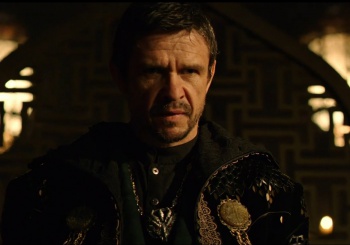 In “The Magician” we get our first look at the legendary villain Ra’s al Ghul. As the confirmed central villain for season three, now we know why Ra’s is getting involved. Oliver’s commitment to protect Merlyn until he can get answers about Sara’s death puts The Arrow and his crew into the crosshairs of the League of Assassins. The war developing between the League and The Arrow is a big enough event to drive the season, and in retrospect the jam-packed first four episodes make a little more sense as a frantic rush to get all the dominoes in place for this war to break out. Ra’s al Ghul’s desire to bring down Malcolm Merlyn is clear and justified by the code the assassins follow, but I get the impression that The Demon has some other motivations. The only person who seems to be telling the truth in this episode is Merlyn himself, and he suggests that Ra’s al Ghul may be directly responsible for Sara’s death. One dangerous omission from Oliver’s description of Sara’s death to Nyssa is that she was killed specifically by three arrows precisely launched at her heart. That detail may be critical. If Ra’s despised Sara enough to have her killed (or even kill her himself), we could see Nyssa break away from the League and sign on with Oliver to fight against her father. Merlyn could easily find himself working with The Arrow and his team as well, as the lesser of two evils at work in Starling City. I’m finally getting excited for this season.

I haven’t discussed much of Oliver’s flashbacks to his time in Hong Kong. Next week we’ll give them the time they’re due.

Bottom Line: “The Magician” finally delivers the central hook of the season: war with the League of Assassins. After a rushed season premiere and some overwrought episodes setting the stage, all the lies, secrets, and animosities are now in place.

Recommendation: With this episode, Arrow returns to the action and pacing that makes it satisfying.