Everything stopped when the gaggle of Boy Scouts entered the art studio. They had just entered the most interesting room in The Guildhall at SMU, the country’s foremost graduate program for videogame design, but that wasn’t the reason for their freckled, dumbstruck faces. It may have been the sketches of lightsaber battles that decorated the walls. It may have been the still-drying sculptures of monster heads that huddled in the corner. 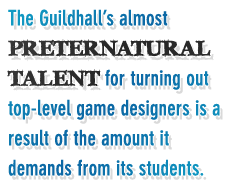 Probably it was the nude college girl posing for a life drawing class.

The silence held until one kid tugged his father’s sleeve and whispered, “Dad, this is the best school ever.”

Kid, after going there, I’m inclined to agree.

In seven years of operation, The Guildhall has developed a reputation as a dream program, a sort of Hogwarts for game designers, where students can earn a Master of Interactive Technology degree specializing in Art Creation, Level Design, or Software Development. The program has graduated 370 students who work in 120 studios globally, including industry leaders like Infinity Ward, Gearbox, and Valve. Their industry placement rate is a phenomenal 95%, and 40% of the graduates report being in a leadership position within a few years of graduation. When asked to rate the skill level of newly-hired graduates, most managers report that if they did not know the graduate’s background, they would guess he or she had 1« -5 years of experience with one shipped title.

It’s likely you’ve already enjoyed, or have been foiled by, the work of its graduates. Guildhall alum Drew Murray is now a Lead Designer at Insomniac, having worked on Resistance: Fall of Man and Ratchet and Clank Future: Tools of Destruction. On the frustration side of the coin, if a spy in a fez knifed you in Team Fortress 2 last week, you can thank alumna Shaylyn Hamm, who created the new Saharan Spy class as part of Valve’s item-modding contest and walked away with a $50,000 royalty check.

The Guildhall’s almost preternatural talent for turning out top-level game designers is a result of the amount it demands from its students. In the professor’s wing, a collaboratively created depiction of a Guildhall student’s journey, crafted by successive waves of students, sits on a staff office whiteboard. It depicts a perilous trek across spike pits labeled “specialization,” towering thesis-project mountains, and a rickety bridge across the Chasm of Finances. Helpful fairies and wizards stand in for the staff and professors. It’s Pilgrim’s Progress for the WoW generation, and floating above all is Doctor Peter Raad, the school’s Director and Founder, standing on a cloud and smiling like a benevolent deity.

Dr. Raad greets each incoming class, or “cohort,” in Guildhall parlance, with the words: “You are professionals in training.” It sticks. Everything Raad says sticks. He’s a fluid dynamicist by training, but he has the voice of a hypnotist. “We built the program backwards. We started with what the videogame industry would consider an archetypal outstanding artist, programmer, or level designer and created a two-year path that would get a student there.”

Dr. Raad sees The Guildhall as a trade school akin to a medical school, where theory is important but practice is essential. Over the course of two years, students work in teams to complete increasingly complex games – starting off with 2D platformers in a three-person group, and culminating in a full 3D demo created by a development team of sixteen to twenty. The program heavily emphasizes cross-disciplinary learning and cross-pollination between the programmers, artists, and level designers. Throughout, the ultimate goal is fixed on developing skills that will make each student an attractive hire for the gaming industry, including building each student’s personal portfolio. “We want them to be able to show that they’re masters of their chosen profession,” says Dr. Raad. “The industry couldn’t care less about how many letters you have after your name, they care about what you can do on day one.” 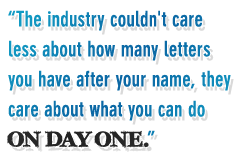 As a result, The Guildhall was designed to simulate the pace and work style of the games industry. During heavy development periods, students sometimes spend up to twenty hours a day coding, designing, fixing, debugging. Walk into the project development rooms and you’ll find mini-fridges full of energy drinks. “It’s important,” he insists. “People always talk about the cruelty of military training, or of giving doctors 24 hour shifts during their residencies, but it’s not out of cruelty. That’s done because one day you will be called upon to work under extreme conditions and you need to be prepared.”

However, industry guests often point out a key difference during their visits – the Guildhall facilities are too nice. Some have suggested that they create unrealistic expectations.

The computer science and engineering buildings I knew were always dank, tiled places that smelled of graphing calculators and sexual frustration – by contrast, The Guildhall looks and feels more like a Silicon Valley law firm. The walls are slick and rounded, painted in cool colors and hung with screenshots from student projects. Offices and conference rooms are outfitted with steel and frosted glass, and the lecture hall chairs are comfortable. Recently, The Guildhall became host to THQ’s primary usability lab – a testing facility – making them the only graduate program in the country to have such a facility onsite. This fusion of academia and industry not only allows THQ access to a stream of product testers, but it allows students to conduct bug-hunts on their projects using professional equipment, not to mention the added bonus of impromptu FAQs and lectures from visiting industry figures.

However, the most impressive space is the aforementioned art studio, an airy, well-lit space papered in printouts of X-Men characters, film posters, and student pen-and-ink studies of Batman and orcs. Work-in-progress busts of bizarre monsters crowd one corner, all slavering tongues and bristly hair, while next to them stands a mannequin wearing the school’s motion capture suit. Even though the room is empty, it feels full of life and motion.

More than facilities, it’s the community that makes the school. Walking the halls, it’s clear how tightly bonded the students become in the pressure-cooker environment. “It’s all the best bits of the game industry without the nasty bits,” says Gary Brubaker, Deputy Director of Academic Relations. “You come together working long hard hours on a difficult project.”

Vicki Smith, a first year student in Level Design, agrees. “It’s a high-density life. I feel like I’ve known the 27 people in my cohort all my life because I’ve spent ten, fifteen, twenty hours a day with them. We become each other’s social circle.” Campus life and student projects become inextricably intertwined. Each development space I enter has a bookcase filled with Steve Jackson games and boxes of Risk and Arkham Horror for the students to break the long hours. Even when they retire to the local pub, The Holy Grail, groups generally snag a table in the corner and drink while bathed in the light of their school-issued Alienware laptops.

It would be wrong, however, to portray The Guildhall as some sort of mill churning out designers. There’s a distinct philosophy at play in the well-appointed halls. “At the end of one year we passed out a survey to the professors with the question, ‘Why do you teach here?'” recalls Brubaker. “Everyone wound up answering the same thing, which was: ‘I’m here because I want to change the world.’ This is the form of human expression for the 21st Century, and we’re effectively building the printing press and teaching people how to express themselves. It’s serious work.”

Dr. Raad is especially convinced that interactive media will play an increasingly large role in our world. He sees the cross-disciplinary teamwork model of The Guildhall, as well as videogames themselves, revolutionizing education. He imagines a future where students learn languages by walking the streets of a virtual Paris, learning vocabulary by buying items in shops and talking to NPCs. “And imagine if you could do the same thing for history, going back in time to Gettysburg and interviewing General Pickett.”

In preparation for the interactive revolution on the horizon, The Guildhall is also preparing its graduates for the hard questions that come with the power they’ll hold. “Ethics is essential,” says Dr. Raad, referring to the curriculum’s required ethics courses. “When much is given to us, much is expected from us. I want my students to think: ‘Do I really want to use this power to create a game about shooting hookers and stealing their money?’ If you’re given the chance to speak in the form of expression of the 21st Century – what are you going to do with it? If I’m given that audience, what am I going to say?”

He smiles. “Because what you say will stay forever.”

Robert Rath is a Hawaii-born novelist, playwright, and freelance journalist who operates out of his home base in Austin, Texas. He is a graduate of the University of Hawaii, and for the record, still hasn’t forgiven SMU for stealing June Jones.