There was one thing about Castlevania: Lords of Go Fuck Yourselves that I forgot to mention in the video, and that’s the camera. Oh, hang on, I guess I did mention that, at length. But there’s an aspect of it I didn’t touch upon, and that’s the fact that it wavers as if it’s being operated hand-held by an amateur operator.

I don’t know if this is some kind of new trend, but I’ve noticed it in this, Kane & Lynch 2, and to a lesser extent Dead To Rights: Retribution. Is it in some way connected to the trend for handheld-style films like Blair Witch, Cloverfield and Paranormal Activity? Is the thinking that it will give the game some air of gritty realism and therefore integrity? Because it doesn’t. It really, really doesn’t. At best it makes me feel like my character was having a hot bath and suddenly stood up very fast.

DTR:R just had this slightly sickening wobble going on whenever you ran forward, but both K&L2 and C:LoS feature a camera that wavers by itself even if you’re not doing anything. And in either case it just doesn’t work. You know how I know? Because I noticed it. This goes back to what I was saying last week about immersion – if you ever find yourself noticing the actual mechanics of a game, then you’re obviously not into it. The camera is supposed to be nothing more than a basic necessity to conveying the experience, like the paper a book is printed on. If the camera’s doing anything that draws my attention to it it’s like printing a book on tin foil or slices of processed cheese.

At least Kane & Lynch 2 was trying deliberately to look like amateur camcorder footage, even if it was for God knows what reason, and even if it raised the question of who the hell was holding the camcorder, why they never spoke or tried to help out and why they kept jumping piggy-back style onto the protagonists’ shoulders whenever they took aim. But who the hell is holding the camera in Castlevania: Lords of Shadow, high above Gabriel Belmont’s protracted skirmishes? Some kind of renegade cherub making a documentary?

The last game that specifically drew attention to the camera was Mario 64, and only because it was relatively new technology. At the beginning they established that the controllable camera was being held on a fishing line by a small cloud monster. But who was filming whenever the cloud monster was on screen, Nintendo? You won’t be lasting long if you keep trying to feed us that kind of bullshit.

“i think you should stop using the whole ‘like God of War … but’ joke … it’s getting old.”
– ranyilliams

You know what, it’s getting old for me, too. The whole “like God of War” thing smacks a little too much of how we used to call sandbox games “GTA clones,” or even further back when FPSes were “Doom clones.” God of War is just becoming a new genre, that’s all.

NO. Fuck that. God of War was already in a genre and it’s called “Hack and Slash.” And there have been plenty of those that aren’t like God of War. Devil May Cry, Ninja Gaiden, Bayonetta, Darksiders, yes, I know I called two of those “like God of War” in their individual videos but I was running with a thing; they’re not on the same wavelength. There aren’t enough supplementary adjectives in the world to create a genre title specific enough to replace “like God of War.” 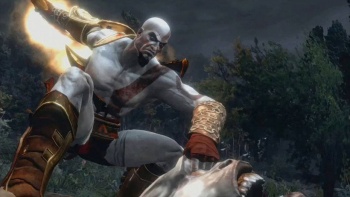 You have a big angry bloke who seriously needs to get over something, generally a lady friend. They take it out on non-human creatures with a weapon that incorporates a chain so that it can have a decent reach. It has quick light attacks and slow heavy attacks, as well as combos involving the two, air combos and the ability to grab and instakill the enemy with the circle button if you’re just completely bored with tossing the guy around. You gather souls from enemies and use them to upgrade your combos and magic spells you learn along the way, and collect things that eventually make your health and magic bars bigger. Then at the end of it you kill whoever the local equivalent of Satan is.

Many games mix and match some or most of these elements but the three that do every single one of them are God of War, Dante’s Inferno and Castlevania: Lords of Shadow. The level of similarity is quite haunting, although I’m hesitant to blame the game’s creators when the only reason shitty cultural trends exist is because there are enough people who keep buying the damn things to make the numbers add up.

With that in mind, and I hope you’ll forgive me while I indulge a little pop psychology, but I wonder if the popularity of the God of War model says anything about us as a people and the prevailing attitudes of the times. The main characters are always superhumanly physically strong with massively destructive attacks, and it’s not too much of a stretch to suppose that the power level of our favorite fantasy personas is inversely proportional to how weak and powerless we perceive ourselves as. But these protagonists are always extremely broody and depressed and suffer terrible torments (what is Dante’s Inferno if not an eight-hour self-loathing session), because for people with unhealthy habits and a desire to avoid responsibility, people who display physical fitness are suspicious and provoke resentment and therefore should be punished, just like those bullying jocks who’ll be laughing on the other sides of their faces once my spiked chain gauntlets arrive.

I also think it’s interesting that all three of these games involve the main characters pursuing extremely personal agendas, but end up saving the world from Satan regardless. The message seems to be an inherently selfish one: that you can basically do nothing but indulge yourself and everything will turn out wonderfully for everyone. It brings to mind that “trickle down” theory that completely fucked over the American economy.

The fact that the personal agenda almost always involves getting your woman back clearly reflects misogyny, which in itself is a symptom of a fear or lack of understanding of women. And now I’ve reminded myself of Dante’s Inferno’s Lust section, with the seductive demonesses who attack you with their big spiky prolapsed vaginas. When you think about it, Dante’s Inferno is basically the story of a man with the mind of an emo teenage boy taking up self-harm in response to a messy break-up, going so far as to picture the new boyfriend as literally Satan.

So, if God of War is popular, it’s because lots of people today are emo, selfish, self-hating, physically weak, sexist, responsibility-avoiding whiners who sympathize with Republican economic policies. You might say I’m reading too much into these things, but you have to admit it’s definitely true that liking Resident Evil 5 makes you a racist.