SyFy takes its monster B-movie franchise to the next level with an equal parts smart and wonderfully-awful sequel to their 2013 surprise hit.

The SyFy network has been pumping out low budget B-movie fare for the past few years in an attempt to recapture the glory days of cheap thrillers that dominated the cinema decades ago. And last year one of those panned out as an unexpected hit: Sharknado. It wasn’t so much of a hit in the ratings as it was with social media. People couldn’t stop tweeting about its D-level cameos, awful effects and ludicrous plot. (I mean, come on, could a sharknado really happen?) It was so bad it was good.

Thus we get Sharknado 2: The Second One. And, to the surprise of all, it’s even better than the first one.

SyFy took all the elements that got people talking in the first movie and amped them up for the sequel. Not only did they get the two original leads back (Ian Ziering and Tara Reid), but they put them to good use. Ian played the average-guy-forced-into-action-yet-again with perfect tone, equal parts corny and believable. From his rock star stance on top of an ambulance that allowed him to slice a passing shark in two using a chainsaw to his tender handling of his ex’s severed arm fished out of a shark’s mouth so he can return the ring that meant so much to them. He spouted every deliberately-cliched line with intense sincerity and reacted to every new horror with terror and determination. Even B-movies need believable leads and Ian delivered.

Tara’s performance was typically wooden, but the writers redeemed her early victimhood of losing an arm (to a shark…on a plane…) by attaching a whirling sawblade to her stump and transforming her into a badass shark-killing machine. In a film that is taking its cues from the grindhouse genre, that’s a good thing.

Of course, the biggest star of all was the Sharknado itself. The never-ending source of hundreds if not thousands of sharks that not only rained down on New York, but also took down an airplane, infested the sewers and killed just about every celebrity with a cameo in the movie with frightening regularity. Hey, there’s Wil Wheaton — dead. Kelly Osbourne — dead. Perez Hilton, Judd Hirsch, Robert Hays, dead, dead, and dead. At least those that didn’t die got to kill sharks — including Al Roker and Matt Lauer from the Today Show. 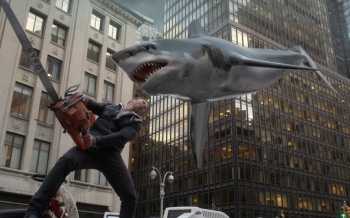 This is the real brilliance behind the amped-up social media element of the sequel. Those watching and tweeting had plenty of fodder to write about in 140 characters or less. Between endless cameos, absurd after absurd set pieces and plenty of geek in jokes for those paying attention, there was non-stop moments to talk about while you were watching. In fact, Sharknado hashtags were 6 of the top 10 trending hashtags last night on Twitter.

Why does this matter? In the age of DVRs, Netflix and streaming episodes on network websites, it’s rare that people watch live television these days. And when they watch it on the DVRs, they skip the very commercials that pay for the programming. So when networks create content that encourages you to watch live to be part of the Twitter conversation, they giving their advertisers what they paid for. It’s also free advertising to get those that missed the premiere to catch a repeat airing. And this kind of success by a network means that you are going to see it and every other channel pump out more and more of the kind of content that creates these kinds of results.

That being said, though I watched it live, I did not play the Twitter game that I was encouraged to do at the beginning of every commercial break. Mostly I was marveling at the pure awfulness of the plot and effects while simultaneously being impressed with how well it was delivering moments that I would definitely be talking about the next day (“Hey, did you catch the William Shatner/Twilight Zone reference at the beginning!?”)

Sharknado 2 delivered exactly as promised: a no-brainer B-movie good time with plenty of surprise cameos and must-see moments. Fueled by social media, it will likely be huge success for the network in subsequent airings. Pretty smart programming in this day and age of a multitude of digital options to TV content.

If you missed last night’s premiere, you still have a few options. You can stream it on SyFy.com, but have to prove you already you subscribe to cable. The first Sharknado is also available for streaming on Syfy.com, but is viewable by anyone. If you prefer to try to recapture last night’s social media glory, both films are running on SyFy Saturday starting at 5pm ET and is followed by Sharktopus vs. Pteracuda at 9pm ET which itself is being followed by Piranhaconda at 11pm ET.