As you may have already guessed, Silent Hill 2 tends to make me gush until I single-handedly cause a second round of biblical floods. It’s one of those games that does a few things so well that it becomes mind-blowingly good, despite being a bit average everywhere else. See also: Resident Evil 4.

If a game combined SH2’s level of atmosphere and storytelling with top-notch gameplay, it’d be an instant classic. The ever-reliable Prince of Persia: Sands of Time comes close with its very believable and non-crowbarred-in love interest subplot, but it still didn’t fill me with the same fascination as James Sunderland and Pyramid Head’s fucked-up bromance.

In the Conduit review, I made reference to a list of game design deadly sins. Thinking about SH2 again has given me inspiration for a set of interactive storytelling commandments, too.

Thou Shalt Not Go To A Cutscene Unnecessarily

Let’s go to the current state of the series for our example – at one point in Silent Hill Homecoming, you’re making your way down a corridor when the screen fades to black and we go to a cutscene in order to watch Pyramid Head walk across a room. It’s impossible to take seriously because it’s such an obvious fan-wank that all but has him wink at the camera. It also puts a big rusty triangle-shaped hat through the all-important immersion. SH2 has no less than three occasions when Pyramid Head shows up with no fanfare and without breaking playability, generally just before he starts hacking you up, and it’s so wonderfully unsettling, because you know something is fucked up about it but the game doesn’t seem to agree. And it’s even creepier when he’s NOT hacking you up. Your radio’s going berserk and he’s just standing there behind a set of bars, silently staring at you as if you’ve just done something he finds intolerably rude, like being in possession of all four limbs.

But when cutscenes ARE necessary:

Thou Shalt Record Mocap And Voices At The Same Time

I really thought this would be industry standard by now. I’m thinking of Oblivion and Fallout 3 here: When you talk to someone they stand perfectly still in front of you, fixing eye contact, rotating their jaws vaguely in time with the words and maybe playing one out of four or five preset gesture animations before snapping back to attention. Now look at the first conversation in the graveyard at the start of SH2 – James and Ms. Crazybollocks wander around, cock their heads to ask questions, gesture uncomfortably when they start creeping each other out… it’s a hell of a lot more natural and is ten million times less likely to hurl the viewer out of the game than scary-puppet-fixed-eye-contact-o-vision. 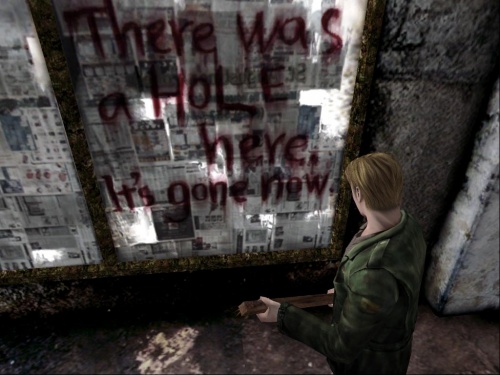 Thou Shalt Embrace Thy Limitations

This was part of SH from the beginning. Konami wanted to make a full-3D survival horror game, but since they were making it on the PS1 they had to wind back the draw distance to about six inches and make up a story about supernatural fog. Result: instantly iconic horror, and by following the same principle SH2 still looks fantastic despite the PS2’s datedness, even if the characters have a slight case of fish lip going on. Consider Portal as well – developed by a small team within Valve, who couldn’t spare the resources to make a longer game with more characters, resulting in an incredibly tightly designed and enthralling experience. Meanwhile, things like Final Fantasy or Gears of War are bankrolled at a sum within the region of a lottery win and spend eight hours showing off every glistening square foot of their overdesigned spaceships and dragons and the result is a complete lack of mystery that very swiftly bores me out of my skull.

I guess it’s just that setting firmer parameters helps the creative process. If you give someone a big bag of money and say ‘MAKE SOMETHING,’ then you’ll probably end up with something pretty but very soft in the head. But if you say ‘MAKE SOMETHING WITH THREE CHARACTERS AND TEN ROOMS AND SET IT IN 1930’S MOROCCO’ then they’ll put a bit more thought into it.

I feel giving any examples will be unacceptable spoilerage, so let me just briefly say that ‘support character was evil all along’ does NOT constitute ‘character development.’ What that is is ‘arse pull.’ And there are a lot of unsavory things that traditionally get pulled out of arses.

That’s all I’ve got so far, but remember that SH2 was showing us how it’s done EIGHT YEARS ago. Jesus. Dented goldfish learn faster than the fucking games industry.

“You can look up by adjusting the vertical sensitivity of the Wiimote.”
– KDR_11k, from The Conduit comments

“Did Yahtzee even bother to check the options? You can adjust aiming speed and the size of the bounding box so you don’t have to point away from the screen to turn.”
– Manicfoot, from directly below KDR_11k’s comment

Didn’t take you long, did it. Fuck. Now I have to backpedal out of the error without losing the smug superiority. I mean, yes, of course I knew all about this. Yes, there are devices within The Conduit’s options menus that let you adjust movement speed, how far up you can look and whether or not you continue turning when pointing off-screen. So I guess a couple of the issues I mentioned can be fixed.

This does, however, raise the question of why you’d include options which are basically toggle switches for ‘make controls work properly,’ and more pertinently, why they’d be set to ‘off’ by default. Besides, I see no options for ‘make game less ugly’ or ‘make story make sense’ or ‘lay off the fucking infinite enemy spawners,’ so yah, boo sucks to you.

The Best $10 You Can Spend This Weekend